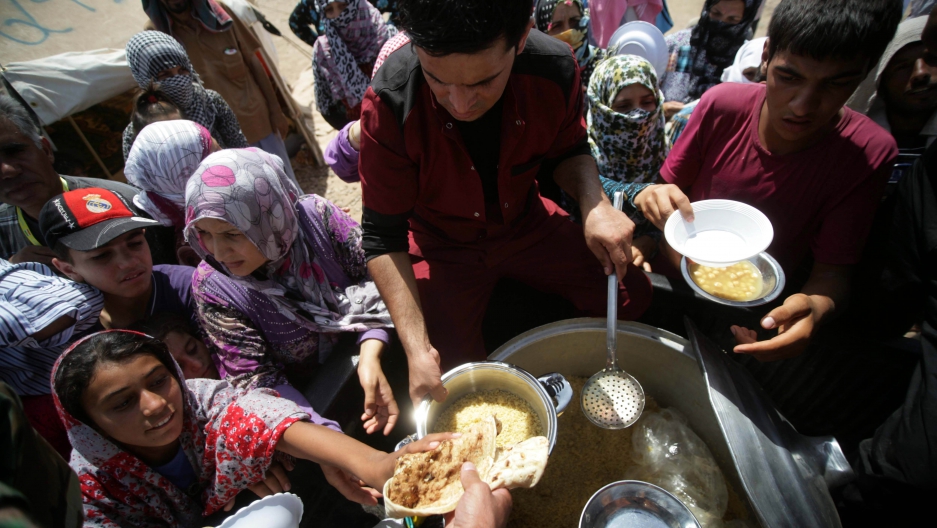 Syrian-Kurdish refugee families queue to get food at the Quru Gusik refugee camp, 20 kilometres east of Arbil, the capital of the autonomous Kurdish region of northern Iraq, on August 29, 2013.
Credit: SAFIN HAMED
Share

WASHINGTON — “This whole war is a war on children. Food, water, shells — they all kill children first.”

Those are the words of Ahmad, father of two-year-old Zeina. (Names have been changed to protect identities.)

More than two years of conflict in Syria has taken a heavy toll on Syria’s children; 1 million have fled the country, and 3 million still within its borders are in need.

The appalling violence against Syria’s children — intentional targeting, recruitment into armed groups, the horrifying use of chemical weapons — has been portrayed in news stories that shock the world. But hunger is another menace threatening children there, one that has been largely overlooked and begs for action.

According to a new report from Save the Children, lack of access to proper nutrition is a crisis hidden in plain sight that has already taken lives of Syrian children.

The toll is similar to what we have seen all over the world. Lack of nourishment during the first 1,000 days of an infant’s life slows development and damages health and cognitive ability. Decreased immunity and vulnerability to disease can in turn be directly traced to a lack of medical care, missed immunizations, and deteriorating hygiene.

Families in Syria cannot get the food they need. In the fighting, bread lines are targeted. Livelihoods have been wiped out and sources of food, water, shelter and health care disrupted. According to UN data, the economic toll of the conflict is $84 billion. Numbers alone cannot reflect the staggering toll on humans. UN data shows that 4 million Syrians need food assistance and children are beginning to die from malnutrition.

The destruction of Syria’s economy has exacerbated the hunger threat. Inflation is rampant and food scarcity means higher prices, two factors that influence a rise in poverty.

When children eat the same food, such as lentils, over and over again, they do not get the variety of nutrients needed for healthy growth.

Families often put themselves in harm’s way to obtain even basic staples. Shooting and fighting disrupt bread lines and block access to grocery markets. The stress on parents and children from violence and hunger compound one another.

Save the Children and other NGOs are working to provide food and water, but their efforts fall tragically short of meeting the vast need. Humanitarian workers become targets, as well, causing delays that hamper the ability of the international community to deliver aid.

The leaders of the UN General Assembly and the UN Security Council, gathering in New York, must recognize the urgency to unite around a plan ensuring safe and unimpeded access to all parts of Syria and easing bureaucratic constraints that prevent children from getting the assistance they desperately need. We also need to ensure that everyone gets what they need and not to politicize humanitarian action.

This call to action is not just from Save the Children and other NGOs. It comes from the Syrian civilians themselves who have suffered so much in this war. Their message for the international community is this: How do you feel that your children sleep healthy and full of food, while our children are hungry or sick, and the fathers and mothers of Syria are desperate because they cannot afford to feed their children?

It is exactly this question that members of the UN must ask themselves. If hunger is not acceptable for our children, we should not let it be acceptable for the children of Syria.

Carolyn Miles is CEO of Save the Children in Washington.