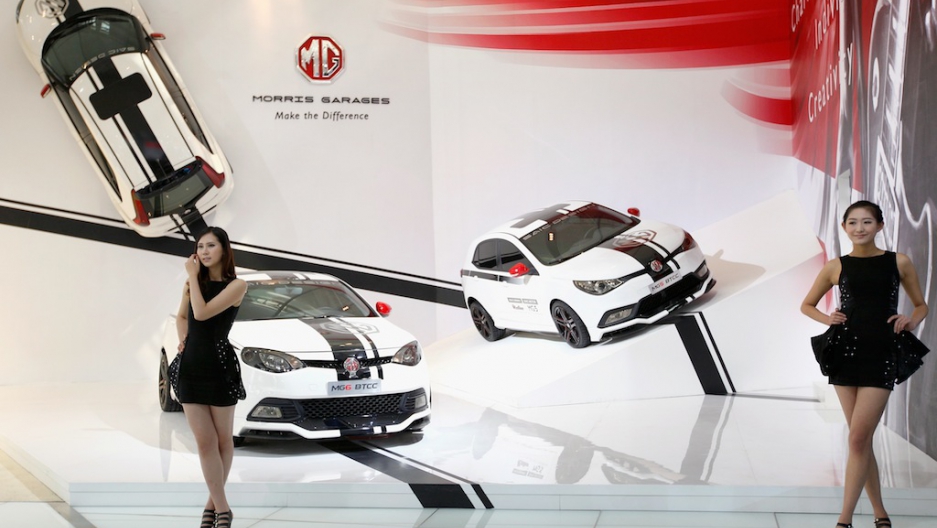 Models stands beside a MG6 Btcc car during the 2012 Beijing International Automotive Exhibition. China's capitalism may be cut-throat like America's, but it's played under an entirely different set of rules, says Andrew Hubert, publisher of ChinaSolved.com.
Credit: Lintao Zhang
Share

HONG KONG — Next to America, China may well be the most ruthlessly capitalistic economy on Earth.

But that doesn’t mean the rules for success are the same. Some of the world’s strongest companies have gone boldly into China and stumbled out with their tails between their legs. (We’re looking at you, Google.)

At the same time, many ordinary American entrepreneurs have managed to build great businesses in the Middle Kingdom with seeming ease. GlobalPost has profiled three such American success stories in clean energy, technology and consulting.

So what’s the difference between a China coup and debacle? We spoke with Andrew Hupert, publisher of ChinaSolved.com and author of "The Fragile Bridge — Managing Business Conflict in China" for a guide to the traps and tactics of doing business in China.

This interview has been edited and condensed by GlobalPost.

What, in your view, are the biggest mistakes US companies and entrepreneurs make when coming to China?

My specialty is negotiation, so I tend to see business through that lens. US companies make three big mistakes when they come to China: 1) bad or inappropriate goals, 2) the wrong partners or a poorly structured partnership, and 3) no exit strategy.

When it comes to goal-setting, many Americans are still following the traditional recipe for disaster — ready, fire, aim.  Americans are still making decisions without sufficient business intelligence about conditions on the ground. They are relying on their counter-parties, service providers and partners to supply them with key strategic data, and using it to base their assumptions and operating plans.

The second big problem is partner selection. Americans have a bias toward operating independently — which is very difficult in China. US corporations tend to be very contract-based, and they allow lawyers in HQ a great deal of influence over how partnerships and key staff relationships are structured. The result is that Americans have a hard time building trust, and get mired in conflict often.

This leads to the third big problem, which is lack of exit strategy. Here I’m referring to individual negotiations, but the same concept applies to entire businesses and partnerships.

Because Americans approach risk management as a matter of contracts and legal protection, they are primarily focused on what happens in the event of loss and business failure. In China, however, your risks increase with the success of your business.

Once your business model is proven, your brand is well known and your process is proven, then it becomes worthwhile for your partners and counter-parties to go after your assets. Americans unwittingly structure deals in such a way that they increase the chances of a Chinese partner engaging in aggressive behavior once the business is a success.

Because Americans lock deal terms in place with contracts and rigid agreements, the Chinese side feels that they can do better on their own — rather than toiling away for the benefit of the Americans.

What are the "Dos" for a business that wants to be successful in China? What separates the companies that succeed from the ones that ultimately fail in their goals?

The biggest variable seems to be deal structure.

In America, you negotiate for a transaction, and if that goes well then you will eventually build a relationship.

In China, you negotiate for a relationship, and if that goes well then you will eventually do a transaction. Both sides want to end up in the same place, but they take opposite routes to get there.

How good is the business climate in China now, in your view? Do you feel that the opportunities are still ripe? How does it compare to the United States?

China is facing decelerating growth and an economic restructuring — so in some respects the picture is less attractive then it has been. But for American firms who aren’t in the Fortune 100, there is actually more opportunity than there has been since 2006.

American small and medium-sized enterprises and large firms who didn’t already have huge investments in place have found the reception in China pretty frosty since 2007. Policy has favored state-owned enterprises and American management techniques were out of favor. High-talent grads favored local companies over foreign names. The market was crowded and fragmented.

Now that China is becoming more competitive and value-oriented, many smaller operators who may have missed the boat in the 2000s have a second chance. Americans are accustomed to slower, consumer-oriented markets, whereas many Chinese firms — particularly the SOEs [state-owned enterprises] — have never faced a sustained downturn.

Beijing is moving against deep-pocketed multinational corporations, who were actually more of a competitive threat to American SMEs [small and medium-sized enterprises] than were Chinese firms. If you are a new entrant or are expanding from a relatively low base, then the China situation hasn’t been this attractive in years.  Joint ventures and partnerships are going to become popular again.

So for Americans who know how to negotiate this could be the start of a great time in China.

If a young American entrepreneur came to you asking for advice on how to get started in China, what would you say?

Develop good sources of business intelligence and find ways to enter the Chinese market that add value in a unique way.

It’s okay to leverage your American strengths and skills, but the days of getting respect, acceptance and credibility just for having a white face and Anglo-sounding name are well and truly behind us.

Take the time to find good partners, and then structure partnerships that are self-reinforcing and success-oriented.