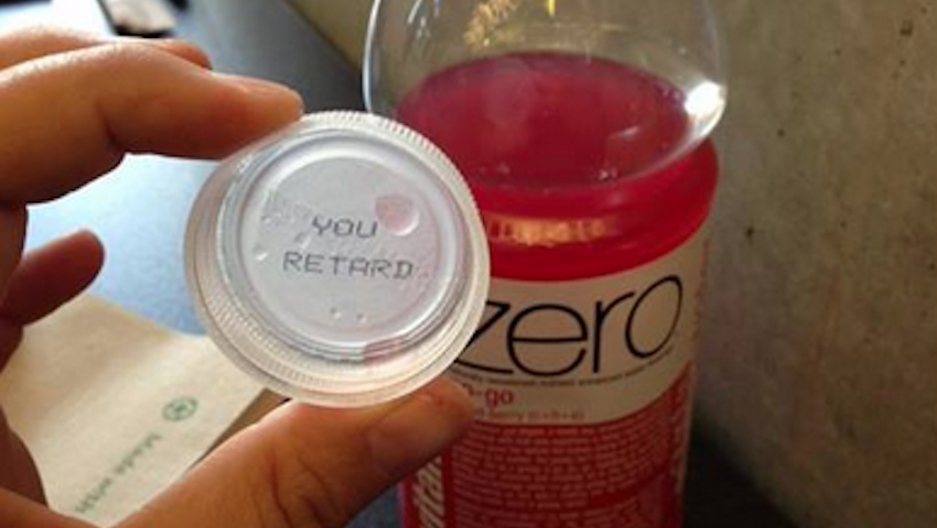 Edmonton woman Blake Loates shows the Vitamin Water bottle cap she received with the words "you retard" printed on it. Coca-Cola has since apologized for the mistake, which happened because of a promotion involving both English and French words. In French, "retard" means late or delayed.
Credit: Blake Loates
Share

Coca-Cola Canada has pulled a promotion that paired randomly generated English and French words under bottle caps after an Edmonton woman got one that said "you retard."

Blake Loates was shocked when she found the offensive words printed inside the cap of a Vitamin Water bottle while at dinner with her husband on Tuesday night.

"We immediately thought, 'You have got to be kidding me,'" she told the Huffington Post Alberta.

"We thought it might have been a disgruntled employee or someone in a (bottling) plant playing a joke."

The mistake was particularly upsetting since Loates's younger sister, Fiona, has cerebral palsy and autism.

"My dad had taught our family what an awful word the 'r-word' is. So he was really upset about this."

The girls' father, Dough, spent that night writing a letter to Coke.

Loates said her family was contacted by Coca-Cola on Wednesday to explain that Vitamin Water was part of a contest being held by the company that involved randomly printing one English word and one French word under the bottle caps. People were meant to collect the caps and combine the words they had to create funny sentences.

The problem was that the English and French word lists were approved separately and no one considered what they might say when put together.

"We did not mean to offend at all," said Shannon Denny, director of brand communications for Coca-Cola Refreshment Canada. "We are certainly very apologetic for this oversight."

She also explained that in French, "retard" simply means a delay.

The company has now cancelled the contest and will destroy all of the caps with words printed on them.

Coca-Cola got a similar complaint from another consumer who had the word "douche" printed on a bottle cap. In French, that's the word for shower.