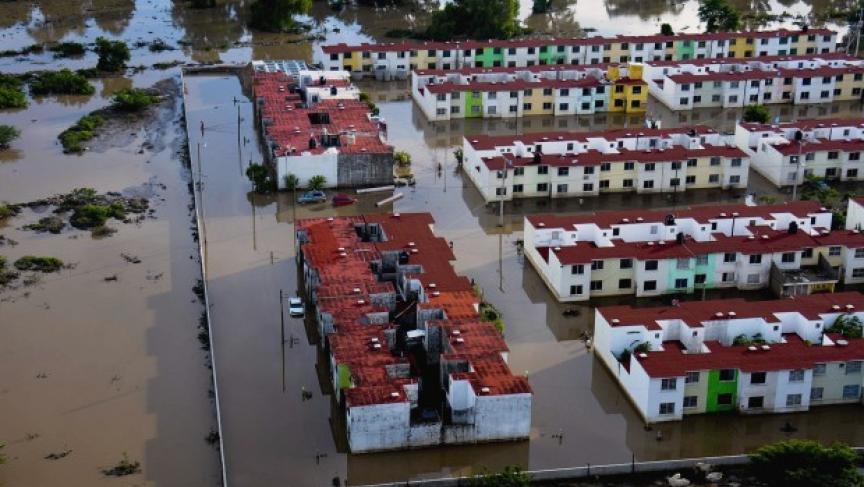 An aerial view of a flooded neighborhood in Acapulco September 17, 2013. Looting broke out in the flooded Mexican beach resort of Acapulco as the government struggled to reach tens of thousands of people cut off by flooding that had claimed at least 80 lives by Wednesday. Foodwaters wreaked havoc in the Pacific port that has experienced some of the worst storm damage to hit Mexico in years.

Dozens are dead and as much as two-thirds of the country has been affected as Mexico has been battered by a series of tropical storms this week. Host Aaron Schachter gets the latest from reporter Jennifer Collins in Mexico City.

Aaron Schachter: I’m Aaron Schachter, this is The World. The rains just won’t stop in Mexico this week. Today, the Mexican government said that 58 people are missing and presumed dead in a landslide that followed a deluge in the country’s southern mountains. They’re just the latest casualties in what the Mexican government is calling an historic one-two punch of tropical storms hitting the country simultaneously from both the Atlantic and the Pacific. Reporter Jennifer Collins has been monitoring the storms and their aftermath from Mexico City. Jennifer, I understand that authorities are now actually calling this a one-two-three punch, since the latest downpours are from the Pacific storm that made landfall earlier this week, and then went back out to sea, and then came back even stronger. Tell us the latest.

Jennifer Collins: Well, the biggest impact there has been from Manuel on the west coast. Several bridges collapsed and you’ve seen dozens of mudslides. There have been freeway closures, including a major route between Mexico City and Acapulco. Flooding has also closed the airport there, meaning Acapulco was completely cutoff, and there’s been a huge toll on the Atlantic side as well. A bus washed off the road, killing about a dozen people, and the government says two-thirds of the country has been affected in at least one way or another.

Schachter: And what’s been the government’s response to the crisis? Here in the US we have a massive disaster response system. In Mexico, how are things?

Collins: Well, states of emergency here have been declared on both coasts. The military has been called in to supply shelter, water, medical attention, and of course to stop looting. The government has also made the natural disaster fund available. That fund is stocked with around $500, but the cost of just one serious hurricane can easily stretch into the billions of dollars.

Schachter: Mexico, of course, is no stranger to big storms and in fact, while it’s unusual, I understand that this kind of simultaneous east-west hit has happened before, the last time back in 1958. What is it that’s so historic about this storm?

Collins: Well, Mexico was a very different place in 1958. The country had less than a third of the population it has now. It was much less developed. And also it just so happens that this storm tok place over Mexico’s Independence Day weekend, when a lot of folks go to the beach.

Schachter: Now, the obvious question when something like this happens is whether climate change has something to do with it. Is there any evidence that things are getting worse there in Mexico–more storms or at least worse storms?

Collins: Yeah, just yesterday the minister of environment and natural resources said these storms were undeniable evidence of climate change, and since President Enrique Pena Nieto took office in December, Mexico has been trying to reengineer its disaster response with an emphasis on preemptive action, but as you can see with the high death toll this weekend, they still seem to be behind the curve.

Schachter: Okay, Jennifer, quickly, what’s ahead in the next few days?

Collins: Well, Manuel has strengthened once again. It touched down in the northern state of Sinaloa this morning. Tens of thousands of people are without electricity. And then over on the east side there’s a good chance that a new tropical storm is forming, and if it does, it could make landfall next week. So unfortunately there’s no real relief in store here.

Schachter: Reporter Jennifer Collins in Mexico City, thank you for the update.