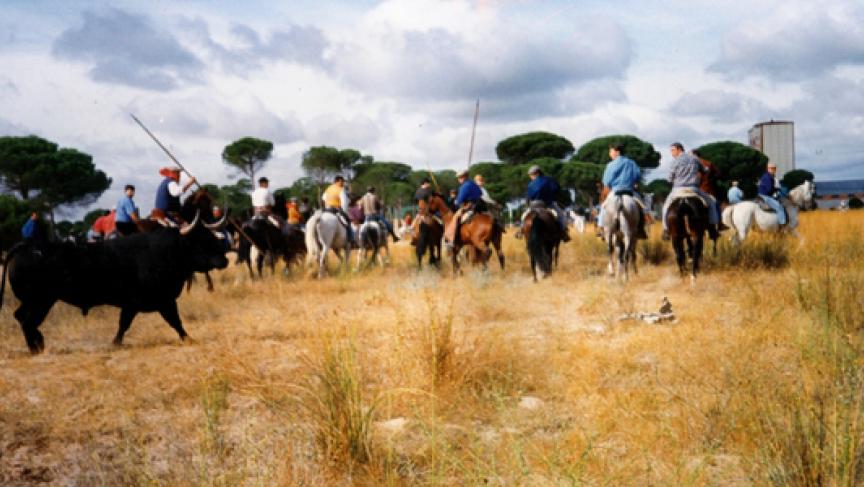 Actually, it's more like bull versus a whole bunch of men.

That's a tradition in the town we want you to name.

It's in Spain and every year there is a festival there called Toro de la Vega. It involves a bull chased by many men, some on horseback, others on feet, all armed with spears.

And yes, the animal is eventually speared to death.

Animal rights activists want to stop the practice, but the town's people are determined to keep their tradition going.

This town gave its name to the treaty signed by Spain and Portugal in 1494. It drew a line that divided the world for colonization purposes into Spanish and Portuguese halves.

That line helped create the modern map of South America.

Spanish town of Tordesillas is the answer.

It seems the entire town of Tordesillas comes out to witness this medieval tradition. Parents with kids, young men dressed in white and red, carrying long, steel-tipped spears and older folks like Angela San Pedro. She says El Toro de la Vega or the Bull from the Valley began some 500 years ago when a mad Spanish queen was imprisoned in the church tower.

"They locked her away up there," Pedro says. "But the queen said, I want a bull. I want to see it down below, in the valley and she got her way. She was able to watch the spectacle from the top of the tower."

That spectacle doesn't involve the usual lone bullfighter armed with nothing but a crimson cape.

Pedro says it's a bunch of guys with spears. Some on foot, some on horses. "You need a lot of courage. This is our tradition, and they want to end it," she says. "The people who are against it, but this belongs to the town. Every town has its traditions."

They just don't involve chasing down a lone bull, say animal rights activists, then stabbing it to death with lances.

About 250 activists face off against police and townsfolk before the spectacle begins, chanting More Culture, Less Torture.

One activist named Carmen says no living creature deserves to be tortured. "All creatures feel pain," she says. "People need to realize this, to open their hearts."

Soon the bull, a huge brown beast with exceptionally long horns, goes tearing past along a cordoned-off road and out into the pasture.

Assassins! Shout the activists. They sprint across neighboring farmland, hoping to disrupt the event before it's too late.

But the ritual is under way. Hundreds of men circle the bull and charge and stab the animal with their long spears. And then the bull reminds you how dangerous it is. A photographer gets too close. The bull charges, knocks him to the ground and gores him in the thigh.

Amid all the shouting, one man takes advantage of the bull's distraction and plunges a spear into its chest. This is the fatal blow.

He is led away by his cheering companions.

The animal rights folks are crestfallen and furious. This is when today's real confrontation begins.

The one between two cultures, two worldviews. Modernity versus tradition. It is one of those moments when you realize how divided Spain is. It ends with both sides hurling insults and townsfolk tossing stones. One activist gets hit in the head and needs stitches.

Another activist, who didn't wish to be named, says they failed to save the bull, but they never expected to.

"Our intention was to get word out to reach other Spaniards who don't realize what's going on," she says.

They hope all the attention pressures Tordesillas to end the bull-kill once and for all. Two regions of Spain have already banned traditional bullfighting.

But spectator Maria Jose Casquedo says she doubts that day is coming anytime soon in Tordesillas.

"It's like soccer," she says. "If you don't like it, don't watch it. They may think the festival's days are numbered, but I hope those of us who love bullfighting will fight to the end to defend it," she says, waving her hand in a stabbing motion.