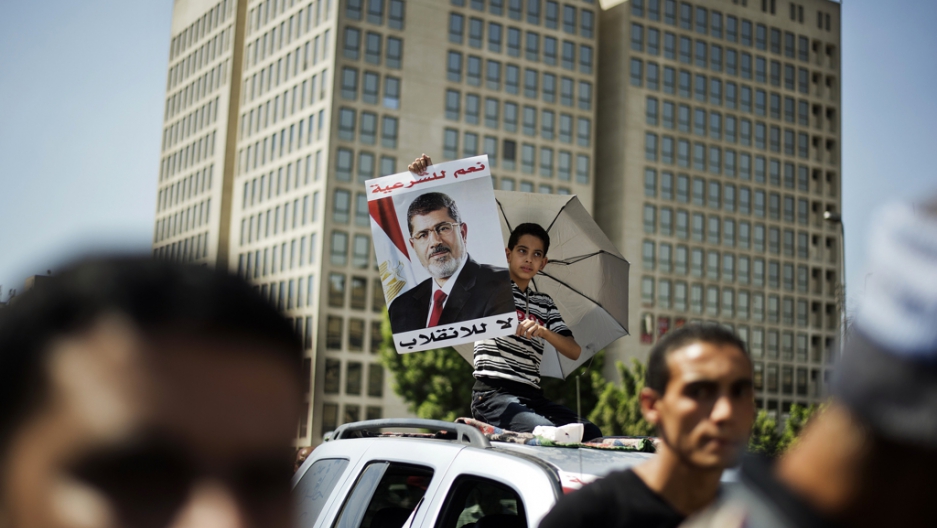 An Egyptian child carries a portrait of ousted president Mohamed Morsi during a demonstration in support of Morsi in Cairo, on August 9, 2013.
Credit: GIANLUIGI GUERCIA/AFP/Getty Images
Share

ABU ZAABAL, Egypt — On the outskirts of Cairo in the hot August sun, families waited for hours outside the Abu Zaabal prison. “I think my son is inside,” said the mother of 15-year-old Mohamed.

He was arrested with his father at an anti-government protest in central Cairo on Aug. 16 — and now faces charges of murder and heavy weapons possession, she said. “But no one will tell me anything.”

When defense lawyer Islam Shahban emerges from the prison hours later, he has no news for her. He was denied access to Mohamed’s hearing, he said.

According to families, lawyers and human rights groups, more than 90 minors have been arrested nationwide since the July 3 military takeover that dismissed Muslim Brotherhood leader and former President Mohamed Morsi from power.

Detained as part of a far-reaching clampdown on thousands of rebellious Morsi supporters, many of the teenagers and children face seemingly fabricated charges — like carrying weapons or instigating violence. They have also been denied due process and are being held in adult prisons, rights groups contend.

Most of the nearly 100 minors were arrested following the forced dispersal of two pro-Morsi sit-ins in Cairo Aug. 14, and following a demonstration two days later in the city’s central Ramses Square.

Security forces have arrested more than 1,500 people in Cairo and Alexandria, Egypt’s second-largest city, since mid-August, according to the Front for the Defense of Egyptian Protesters, a coalition of NGOs and activists that regularly provides legal support for the detainees.

The sheer volume of arrests has overwhelmed the Egyptian prosecution system. Many detainees have attended pre-trial hearings in prisons and riot police camps — like Abu Zaabal — often without access to lawyers.

“We’ve spoken to a lot of lawyers who are representing the accused, and my sense is that these are ‘copy and paste’ charges,” said Diana Eltahawy, Egypt researcher for Amnesty International, a London-based rights advocacy group.

“We’re worried that people are there not because they have committed recognizable criminal offenses,” she said. “But because this is a politically motivated crackdown on anyone who supports the movement, regardless of whether they individually bear criminal responsibility.”

After winning Egypt’s first free and fair presidential elections in 2012, Morsi and his Brotherhood movement botched their first year in power, failing to revive a stalled economy and presiding over a rise in sectarian rhetoric and civil strife.

When perhaps millions joined protests across the country against his rule on June 30, Egypt’s powerful military moved to seize power. Since then, the army-backed government and its supporters, including in the media, have portrayed Morsi and his Islamist supporters as terrorists.

Hafza Ahmed Abas, 17, is one of the minors caught up in the dragnet.

Her family said she was detained, like Mohamed, while walking home from the same pro-Morsi protest on Aug.16, when thousands turned out to demonstrate after security forces killed hundreds at the Cairo sit-ins two days earlier.

Abas is being charged with incitement to murder, vandalizing property, terrorizing the public and possession of a rocket-propelled grenade (RPG).

“My sister doesn’t even know what an RPG is,” said Abas’ brother, Tarek. Now, she “is in a small cell with no light and a single toilet. Only our mother is allowed to see her.”

She is being held inside Tora prison, which has housed high-profile detainees like former President Hosni Mubarak and now Morsi.

Under Egyptian law, minors should be judged in front of a special court for minors and detained in a juvenile facility. According to Egypt’s Child Law, officials who detain children in adult facilities can be imprisoned for a minimum of 3 months.

Three other families described similar experiences to GlobalPost, but would not speak on the record for fear of reprisals from security forces.

The mishandling of child detainees is not a new phenomenon. Hundreds of minors arrested in the aftermath of protests marking the second anniversary of Egypt's January 2011 uprising.

At the time, rights activists pointed to the severe institutional abuse of children in the judicial and prison systems.

“Children have even been tried in front of military courts,” she said. “This situation is not unique to this particular political or human rights crisis.”

In practice, the laws designed to protect Egypt’s some 30 million minor rarely do so.

Child labor is banned, but the government estimates that 1.6 million minors are working — and often in tough conditions.

Officials at the justice and interior ministries did not respond to requests for comment on the detention of minors.