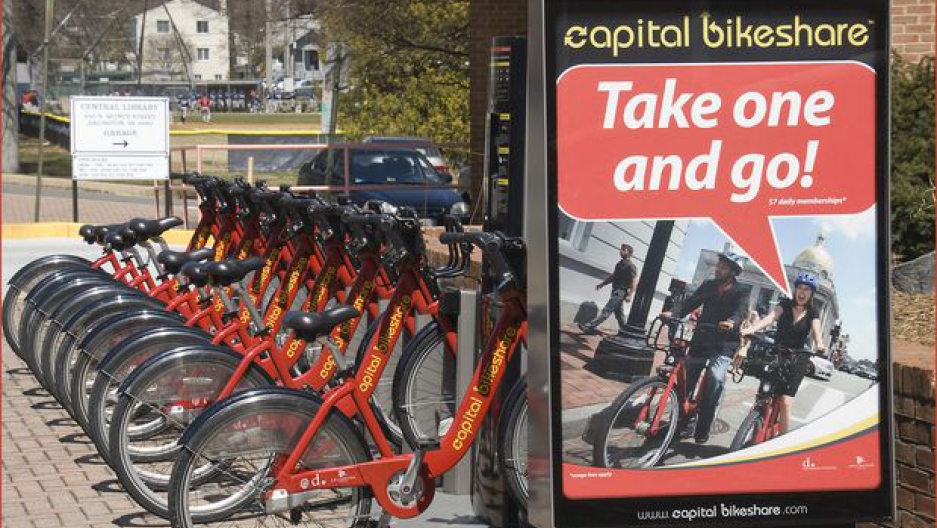 The Central Library in Arlington County, Va., had Capital Bikeshare bicycles in April 2013.

While ambitious in its cultural and social leap, it was modest in scale, featuring just 120 bicycles docked in 10 automated rental locations.

But people liked it.

By 2010, the program was replaced by something much bigger and more ambitious, Capital Bikeshare, which now boasts nearly 200,000 riders and 2.3 million trips per year. In the years since its expansion, the pioneering program has been replicated many times over from San Francisco to New York City, Miami and other places.

Gabe Klein, the visionary man behind D.C.’s Capital Bikeshare program, is now the transportation commissioner for another enormous American city that has rolled out a bike share program: Chicago.

Klein says biking is changing the face of public transportation in order to keep up with changes in urban America.

"The economy is changing, cities are changing, we are reurbanizing in America's cities and you have a whole new generation of people and new technologies that are basically changing the way we live, work, and play in cities," he said.

Bikeshare programs attempt to fill in the gaps for travelers who are insufficiently serviced by other public transportation options, like trains and buses. Bikes offer flexibility to match the diverse needs of urban dwellers, Klein said.

"People need different modes of transport for different times of the day, for different uses depending on the size of their family and it is often that last mile that's challenging people," Klein said.

"From a business standpoint, from the government's standpoint, the ability to literally drop a station in 20-30 minutes, no construction, no wiring it to the power grid and then being able to expand it on the fly was like nothing else out there in transportation," Klein said. "And so I knew that it could be hugely successful in Washington D.C."

The original plans for Capital Bikeshare were inspired by successful programs in other countries, like France and Canada, Klein said. Montreal's Bixi program, which implemented new software to be able to track all of its bikes, was especially influential and impressive to Klein.

Chicago's Divvy bike-share service launched on June 28 and by mid-August had surpassed 150,000 rides. The city is slowly introducing more Divvy bicycles to different locations around the city and plans to eventually have some 4,000 bikes in service.