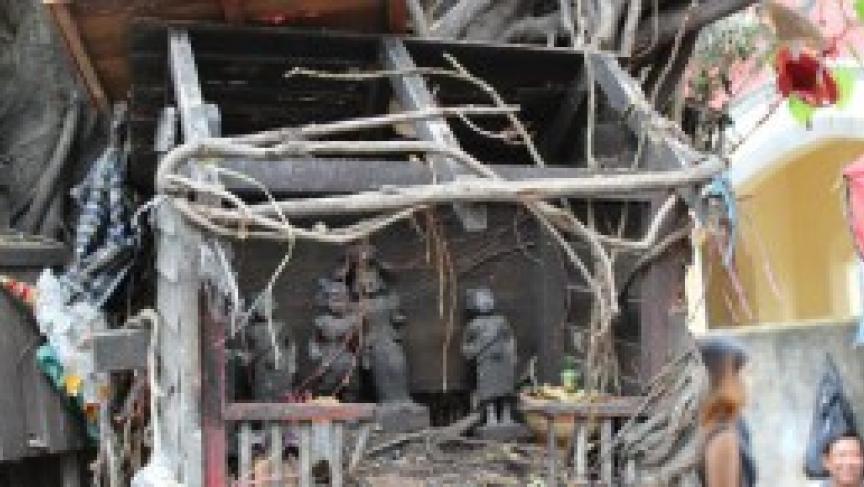 Figures in the shrines represent a multitude of personages from the Burmese pantheon, mixing figures of the Buddha with nat and weikza figures from traditional spirit worship.

Stumble onto the morning markets with their chorus of hawkers calling out from behind bins of shrimp and sacks piled with rice. Appreciate the peculiar mix of titles for sale at side-alley book stalls–homebound volumes about civil management, religious esoterica, English-language pulp thrillers, and, of course, Orwell's "Burmese Days." You'll also want to spend a lot of time at the ubiquitous curbside tea and noodle shops you will have no doubt read about.

And don't forget to look in the trees. Last fall, on my first trip there, I was staying downtown a little east of Sule Pagoda. I'd spent my first day following parades of religious devotees around, and on my way back to my hotel I noticed a tree loaded down with what from a distance looked like elaborate bird houses. I walked across the street and, at close range, discovered wooden platforms displaying small Buddhas and at least one figure I recognized as a nat.

Nats are this diverse universe of spirits worshiped in Myanmar. They predate Buddhism's arrival in the country, and today are intertwined with Buddhist belief. Nat spirits are connected to objects like water and trees, but also take on human form. Figures of a higher level of spirits, named weikza, often commingle with traditional Buddhist iconography in these street shrines. Weikza are thought to have power to intervene in human life, and offerings are often made to them in hopes of achieving particular goals.

Once I started noticing the street shrines, I saw them everywhere. My pictures are all from downtown Yangon, but these shrines are all over Myanmar–along roadsides and in most towns and villages.

Nat shrines are also important elements of many houses (although always placed lower than Buddhist icons). Juliane Schober, a professor at Arizona State University who studies Buddhism in Myanmar, lived in a house in Mandalay for two years, and told me about the negotiations required with the nat shrine in the house when she first moved in.

"The family called in the grandmother and a spirit medium," Schober said. "In that session they negotiated the fact that I was going to be living there now too, and what it would take for me to be allowed to live there and tolerated by the spirit. They made some offerings for that purpose. And I also received some instructions of what I was to do and not do in the presence of those things. It was a way of normalizing my presence in that household, and insuring that the family and everybody in the compound would not have offended spirit by bringing me in."

There are also major annual festivals honoring nats. Check out Becky Palmstrom's story about the increasing role that LGBT people have as spirit mediums in these festivals. Nats, weikza, and Buddhism coexist in really intricate ways that I'm only beginning to understand. As Thomas Patton, who studies Myanmar spirit worship, says, "Their religious lives are much more eclectic, dynamic and innovative than what one often reads about Buddhism."