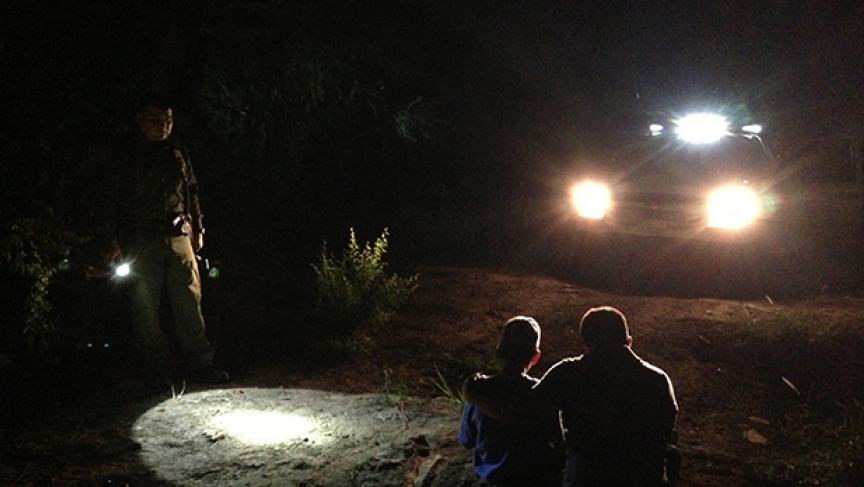 A grandson hugs his grandfather after both were apprehended by Border Patrol in Hidalgo, Texas.

Night falls in the Rio Grande Valley outside Mission, Texas. The river glistens under a full moon, deceivingly peaceful. Suddenly, through a pair of night vision goggles, a US Border Patrol agent spots movement. He picks up his radio and calls in, "Eh, 402 Can you tell what's on the raft?"

A mother and her two infant boys are floating across on a raft. They will make it to US soil, but their taste of success is brief. They are apprehended and put in the backseat of a Border Patrol SUV.

The family is from Guatemala, on their way to reunite with the woman's husband in the US. Now, their fate will be a detention center and likely deportation. While apprehensions across the southern border are declining, South Texas is the one spot where the numbers are rising again. So far this year, Border Patrol agents have detained nearly 200,000 people in this part of Texas.

"We could apprehend anywhere between 100 and 200 a shift," says Mark Foster, a Border Patrol supervisor.

In response, the Border Patrol is shifting resources and 600 more agents to South Texas. But the terrain out here does not help. The Rio Grande River swerves and curls downstream like a string of yarn. Access is limited by gravel pits, cliffs and delicate wildlife refuges. There's also private homes and farmland, where locals can make a pretty profit cooperating with smugglers.

Daniel Pérez is a newly minted Border Patrol agent from Arizona. "It's a big change," he says, referring to his time in Arizona. "Here, you got the river, and then they come into this jungle gym of a brush that we've got here and hiding spaces everywhere."

Historically, heavier enforcement has pushed immigrants out of urban centers to the deadly Arizona desert and now rural Texas, which has its own dangers.

Metal poles clank onto the back of Eddie Canales' pickup. He is 70 miles north of the border in Brooks County, Texas. These poles will be topped with a giant blue flag. "Blue means water," Canales explains. He works with a network of human rights groups. The blue flag is for a water station he's fixing to put in at a nearby ranch that's frequently traversed by immigrants. Three years ago, Brooks County recovered the bodies of 20 dead immigrants. Last year, the number of dead shot up to 129.

"We save lives out here every week," says Lavoyger Durham, who manages 13,000 acres on El Tule Ranch, west of the county seat of Falfurrias. It's rough country here: oppressive heat, thorny thickets, insects and snakes. "You know, people have given up. And they're crawling to my house and knocking on my door and, 'Please, give me water and please give me food.'"

The immigrants come through Durham's land to avoid the Border Patrol checkpoint south of town, on US Highway 281. In the last two decades, Durham has found his share of bodies. A telltale sign, he says, is a circle of buzzards.

"Actually you're pretty lucky when you find a dead one because of the coyotes and the vultures and the javelinas. They eat them up," Durham says, referring to deceased migrants he has found on his land.

The majority of the immigrants crossing the border now are from Central America: Honduras, mostly, then El Salvador, Guatemala, Nicaragua. Many say violence back home makes life impossible, so they flee.

Benny Martínez is the chief deputy in the Sheriff's Department for the County of Brooks. He says last year, the county spent nearly $200,000 burying the unidentified remains of border crossers in the local cemetery. There are also smugglers who operate here, he says. Recently, sheriff deputies stopped a U-Haul trailer stuffed with 70 immigrants.

"They are on US soil and this is where we need to step up and start doing something more proactive to where we can avoid these deaths out here," says Martínez.

This year the body count is already at 70. At this pace Martínez believes Brooks County could end up with more dead than last year.

Ortiz Uribe's story came to us from Fronteras, a public radio collaboration in the southwest that focuses on the border and changing demographics.