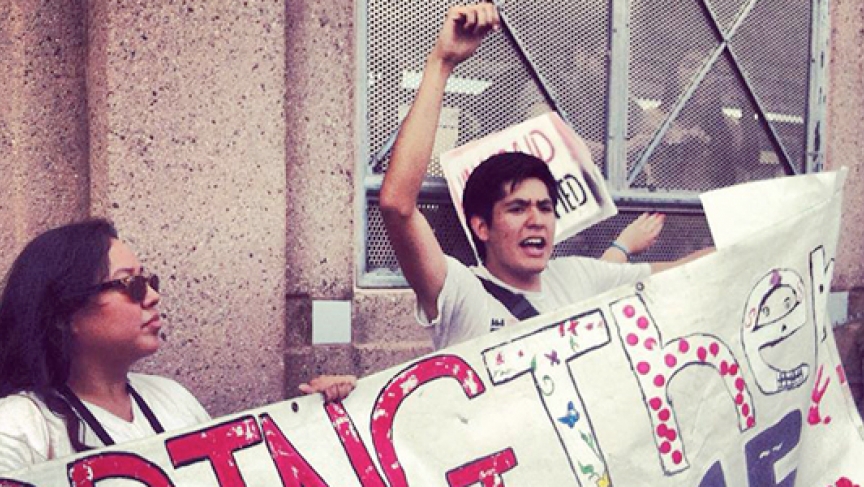 Luis Nolasco was nine when his parents brought him to California from Mexico. He now protests the rising number of immigrants held in U.S. detention centers, while also arranging for volunteers to visit immigrants in the facilities. (Photo courtesy of Lui

It’s looking unlikely that Congress will take up immigration reform this fall. But the push is still on to put deportations and immigrant detention centers under the microscope. And some of those leading this effort are immigrants themselves—who’ve spent time in detention centers—and are organizing to support those still inside.

Luis Nolasco was nine when his parents brought him to California from Mexico.

Back then, his family’s “undocumented” status meant little to him, but that changed his senior year of high school.

Without papers, Nolasco missed out on college funding. But he found a way to study, graduated, and joined others like him to push for immigrants’ rights.

“It’s not until after I became comfortable in my undocumented identity,” Nolasco says, “that I started learning more about the way that detention centers work, and where we are pretty much right now.”

Where are we now? On any given day, some 34,000 immigrants sit behind bars in US detention centers for reasons related to their status—that’s up about five-fold from 20 years ago, as enforcement has tightened.

Nolasco protested this mass detention of immigrants, most of them held on civil – not criminal – charges.

Then he went a step further, and turned himself over to Border Patrol.

“I turned 22 inside detention, which is really fun,” Nolasco says with a laugh. “Party of one.”

Nolasco saw how immigrants could feel lost in the system. In one month, he was shuttled between three detention facilities in three states. He never had a visitor. Friends and family couldn’t keep track of where he was.

Eventually, Nolasco was released, and he’s trying to legalize his status.

He’s also determined to support immigrants still in detention. In Southern California, he joined a coalition of undocumented youths and met an activist, Victoria Mena.

“And she’s like, ‘Actually, I’ve been working on setting up a visitation-type program up here in the detention center we have in Adelanto,” Nolasco says.

“’Would you be interested?’ And [I said,] ‘Yeah, definitely.’ So I was able to get connected to the Friends of Adelanto Detainees.”

Friends of Adelanto Detainees, in Southern California, is part of a nationwide network called Community Initiatives for Visiting Immigrants in Confinement—or CIVIC. It supports programs sending volunteers to visit detained immigrants—and watch the facilities holding them.

Prisoner visitation programs have long existed, but for immigrant detainees, the need is especially great, advocates say. Detained immigrants usually lack lawyers, and often lack English language skills. And many are alone in the US.

So Nolasco helped launch the Adelanto program in July. It started strong. Some volunteers drove hours to visit the desert facility. Immigration and Customs Enforcement, or ICE, had approved the program.

And then it stopped.

“We got about a week in,” Nolasco says, “and then ICE emailed us saying that our visitation program is canceled until further notice, without any explanation whatsoever… why, reasoning, nope, nothing.”

Other visitation programs in California were also canceled without explanation.

“So we started a campaign to get the program reinstated,” Nolasco says.

A congressman complained to ICE. The ACLU wrote a letter. So did volunteers.

Then CIVIC–the national visitation network—reported that, over the phone, ICE complained about Adelanto Friends Facebook posts and website comments related to visitation. Though they said the main culprit was a Huffington Post blog by CIVIC’s co-founder criticizing the treatment of detained transgender immigrants.

ICE declined interview requests for this story but stated in an email that they had suspended the visits to protect detainees’ privacy.

Nolasco says his visitation program has strict privacy guidelines, with visitors instructed not to talk about detainees. Finally, almost a month after the suspension, ICE said it would reinstate the visitation program at Adelanto.

But there was no champagne. The Friends of Adelanto Detainees told ICE, “No thanks.”

“We’re choosing not to be reinstated,” Nolasco says, describing his group’s response to ICE’s offer. “We don’t need [ICE] any more. We already made some friends inside who can help us spread the word out. Because what if we do something just slightly, just publish something, and they take away our program again?”

So the visitation program hasn’t stopped. It’s just happening informally now, with volunteers visiting detainees as if they were regular friends and family. And the program is growing, exceeding 100 detainees requesting visits, and 70 trained volunteers.