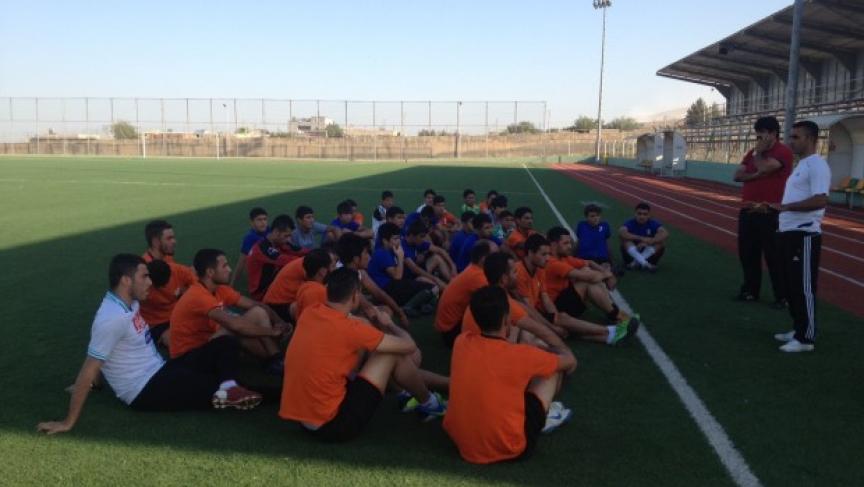 Mohamed is nervous. The 23-year-old was a pro soccer player in Syria's main league before the war. Now he hopes to join a club here in Turkey.

The local Turkish coach flicks through pictures of his potential new recruit, and invites him for a tryout.

Mohamed came to Turkey with his family last week. His brother needs treatment at the hospital. And he wants to play soccer.

The family is from the Northern city of Raqqa. Located about 120 miles east of Aleppo, Raqqa is the only main city fully controlled by the armed opposition today in Syria.
I ask him how's the situation there. Good, he says, except for the regime's airplanes dropping their payload on civilians.

Then, a while later, he brings up a trickier subject.

Dawlat al-Islamiyya is in charge of the city now. The al-Qaeda brigade is also known as the Islamic State of Iraq and Syria.

Mohamed says even a stroll in the park can get you in trouble these days.

"Now in Raqqa," Mohamed says, "you walk with girls…" He whistles. "I saw once in the park two couples; and the Islamic men come and ask them: 'why you walk with girls? Give me card.' And he took them away."

Mohamed laughs nervously when I ask what happened to the men. He knows this isn't a joke.

His uncle left Syria two months ago. For him, it was a matter of life and death.
Abu Mossaab was a civil engineer working in Raqqa. He says he was kidnapped by one radical Islamist group shortly after they took over the city last Spring. Abu Mossaab says his captors didn't accuse him of anything. Money is all they wanted.

"I don't know any reason why they took me. I asked them for one reason, asked them if I stole something, if I killed someone, if they thought I was a spy. And they said to me, 'we just need money from you if you want to get out of here.'"

It took a month and a half for his family to raise the ransom payment, 5 million Syrian pounds, about $40,000.

A few weeks after his release, Abu Mossaab was kidnapped, again. He says by the same group. But this time he managed to escape, and fled the country. He says his brother was killed on a street in Raqqa that very same day.

Abu Mossaab's wife hovers around anxiously. As the interview goes on, she gets more agitated and begs her husband to stop.

For Mohamed, their nephew, this fear of speaking up has an air of deja vu.

"Before, people say 'you don't talk about Bashar (al Assad). Oh my god! No, don't speak!' And now it's same. Don't speak (because of the) Islamists. It's not freedom, it's the same as before."

Following a playbook well tested in Iraq, al-Qaeda has ramped up its scare tactics in Raqqa. Last month, a car bomb rocked the train station that served as headquarters for the mainstream rebel group, the Free Syrian Army, or FSA.

Abu Milla, another refugee, lived on that street.

The attack killed two FSA commanders, and drove the group out of the city. Abu Milla says the FSA was good to people. But Dawlat al-Islamiyya is worse than the regime. He says what they really want is to carve out a Sharia-ruled territory inside Syria, rather than free Syrians from Bashar al-Assad.

Abu Milla supports a US intervention because he hopes air strikes would help the Free Syrian Army and precipitate the fall of the regime.

Abu Mossaab, the twice-kidnapped engineer now in Turkey, goes further. He says Americans should consider killing two birds at once.

"They should make it even," he says… "Bomb the regime, and bomb the Islamist groups."
Abu Mossab says he won't go back to Raqqa as long as they're ruling his hometown.