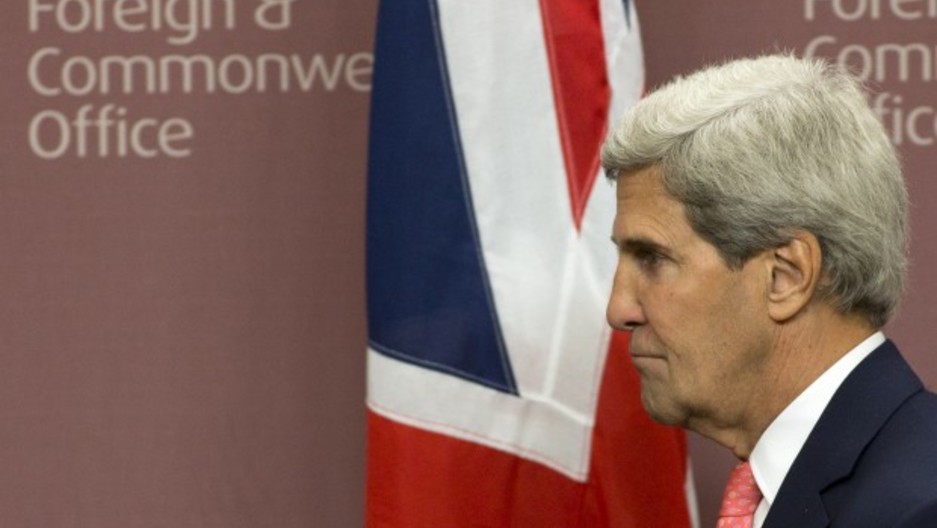 U.S. Secretary of State John Kerry leaves the podium after his joint news conference with Britain's Foreign Secretary William Hague at the Foreign and Commonwealth Office in London September 9, 2013. Kerry said on Monday Syrian President Bashar al-Assad could avoid a military strike by turning over all his chemical weapons within a week but immediately made clear he was sure that would never happen. REUTERS/Alastair Grant/pool (BRITAIN - Tags: POLITICS CONFLICT) - RTX13E25

Share
Syria welcomed the idea of giving up its chemical weapons for destruction under the auspices of international observers. The proposal came from the Russians. But it appears to have originated with US Secretary of State John Kerry. Asked on Monday about how the Syrian president, Bashar al-Assad could avert US military strikes, Kerry offered this suggestion during a news conference in London. "He could turn over every single bit of his chemical weapons to the international community in the next week, turn it over, all of it, and without delay and allow a full and total accounting for that." If he was aware of having just let loose an off-the-cuff gaff, Kerry very quickly seemed to try to walk it back. He said Assad, "isn't about to do it. And it can't be done, obviously." But hours later, Russian Foreign Minister Sergey Lavrov said Moscow would work with Damascus to relinquish its chemical weapons stockpiles, "if the establishment of international control over chemical weapons in the country will prevent attacks." The United Nations soon responded positively to the idea as well. UN Secretary General Ban Ki-moon said he is, "considering urging the Security Council to demand the immediate transfer of Syria's chemical weapons and chemical precursor stocks to places inside Syria where they can be safely stored and destroyed." Syria's Foreign Minister Walid Al-Moualem said his government, "welcomes the Russian initiative, motivated by the Syrian leadership's concern for the lives of our citizens and the security of our country." Moualem credited the Russian government for, "attempting to prevent American aggression against our people." The Obama administration said it wants "to take a hard look at the proposal" from Russia. "Of course, we would welcome a decision – and action – by Syria to give up its chemical weapons," said Deputy National Security Adviser Tony Blinken at a White House news conference Monday. "The whole point of what we're doing is to stop Syria from using these weapons again." At the same time, White House officials are quick to point out that the Syrian government has long refused to join the 189 other nations on earth that have signed the international treaty banning chemical weapons. And just last week, Blinken added that "President Assad wouldn't even say whether he had chemical weapons, despite overwhelming evidence he's actually used them." Blinken went on to say that the Russians have blocked attempts at the United Nations Security Council to hold the Assad government accountable for using chemical weapons. Administration officials were also quick to give Barack Obama the credit for making any diplomatic breakthrough with Syria possible. This dynamic, said White House spokesman Jay Carney, "is because of the intense pressure being placed on Assad by the prospect of the United States engaging in military force." "And that is why it is so important to continue to put that pressure on Assad."