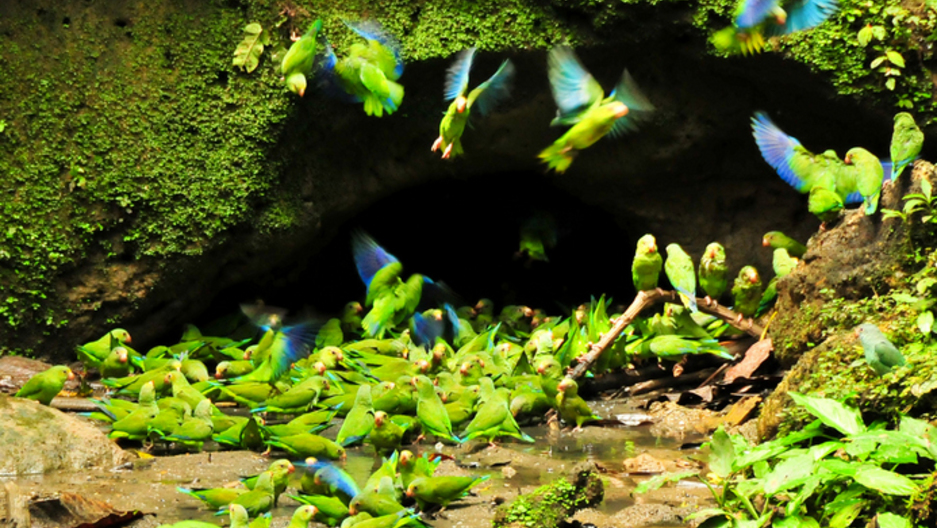 The small area of Yasuni National Park has more species of birds than all of North America. (photo: Joshua Bousel)

Yasuni National Park in Ecuador is home to more species of plants and animals than all of the United States and Canada combined, but it's being threatened because it sits on top of billions of gallons of oil.

In 2007, Ecuadorian President Rafael Correa offered to keep the oil in the ground if the international community compensated Ecuador for some of the money it could have made from oil concessions -- something like a Kickstarter for conservation.

The first-of-its-kind plan was promising but didn't work out as many hoped, said Kelly Swing, director of the Tiputini Biodiversity Station.

"I think the big reason that the world didn't support this idea has to do with credibility. Latin American countries in general have a poor reputation as far as governmental stability's concerned," Swing said. "Ecuador is certainly at a period of instability."

The park is now back in Correa's crosshairs. The president announced the country would begin oil exploration operations in August.

Swing says the forest is a frontier of undiscovered insects and plants adding that up to 80 percent of the world's insects have yet to be described by science.

"I can go out in Yasuni and find something I've never seen before in two or three or four minutes, and it just goes on and on and on even after all these years," Swing said.

Discoveries large and small still await scientists within the forest. Several years ago, a zoologist discovered not only a new species of plant, but an entirely new genus.

And these discoveries are more than just scientific curiosities.

"There's a tremendous amount of biodiversity that need to be catalogued and may actually represent very important values for science and maybe for pharmaceutical products and cures for cancer or AIDS or those kinds of things," Swing said.

Correa counters those resources are less important than ending poverty in Ecudador, which is what he says he plans to do with the oil money.

The park's best chance for preservation is with the Ecuadorian people, who have the power to petition to halt the government's decision.

"At that point, you know, if it comes to a vote, we don't know which way it would go," Swing said. "I have a feeling that the government will do some pretty serious campaigning, and Ecuador's government is excellent at very polished propaganda."