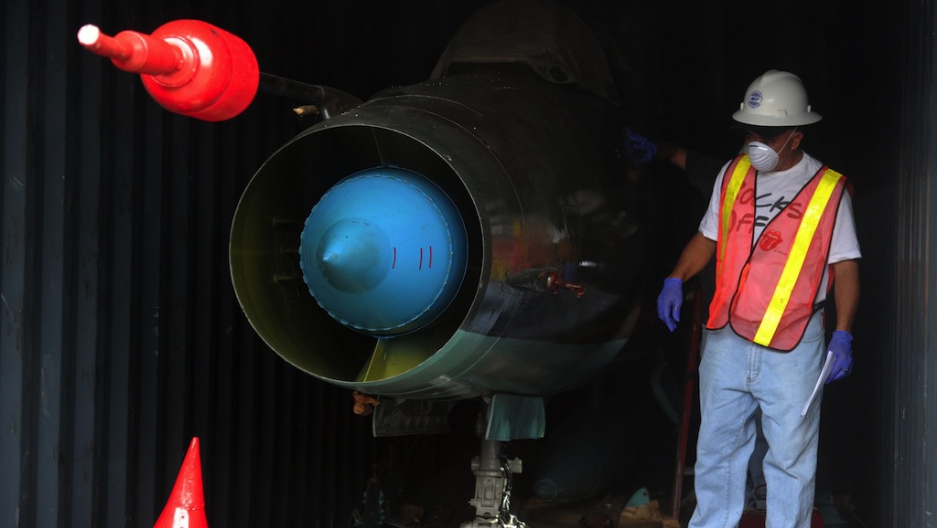 A MIG-21 jet inside the North Korean vessel where an alleged Soviet-built radar control system for surface-to-air missiles was found, in Panama on July 21, 2013. A Japanese newspaper reports that another weapon-laden North Korean ship was seized by Turkey en route to Syria this April.
Credit: Rodrigo Arangua
Share

SEOUL, South Korea — The Obama administration’s push for a military strike against Syria is in full swing, highlighting not only the use of chemical weapons but the regimes that support Assad.

Aside from Russia (Syria’s most powerful ally) and Iran (its neighbor and the regime’s Shiite brother-in-arms), President Bashar al-Assad has quietly relied on a distant backer: North Korea.

Syria and North Korea have been “cooperating on a number of fronts,” including possible chemical weapons exchanges, Pentagon spokesman George Little told reporters on Thursday.

The announcement came a week after the Sankei Shimbun, a Japanese newspaper known for its North Korea coverage, reported that in April, Turkey had seized a shipment of arms, ammunition and gas masks en route from North Korea.

The Turkish government has not commented on the alleged confiscation. If true, the discovery suggests the military may have foreseen using chemical weapons, and sought protective gear for its own troops.

The Obama administration contends that an Aug. 21 sarin nerve gas attack killed more than 1,400 civilians in the Damascus suburbs, including at least 400 children.

Such a shipment of equipment from North Korea to Syria would be the latest example of close military cooperation between two of the four nations with known chemical weapons stockpiles (the others being Russia and the US, both of which are in the process of destroying their arsenals).

For five decades, Damascus and Pyongyang have maintained close ties. North Korea has sided with Syria because of their mutual enemy: the United States. Additionally, as Leonid Petrov, a North Korea researcher at the Australian National University points out, “Both states are the hereditary dynasties of dictators.”

American spy agencies say the two nations also ran a joint nuclear program in the mid-2000s, and others believe they continued with apparent exchanges since then.

Fears over the Syria-North Korea relationship peaked in 2007 when Israel launched an air strike in eastern Syria called Operation Orchard. The Israeli air force destroyed a facility that the International Atomic Energy Agency later indicated appeared to have been an undeclared nuclear reactor.

American and Israeli intelligence officials insisted it was built by North Korea and funded by Iran, while the Japanese broadcaster NHK reported that 10 North Korean technicians were killed in the attack.

American intelligence officials were initially tight-lipped, but eventually brought forward evidence of the connection. For one, the Syrian reactor bore resemblance to North Korea’s own facility in Yongbyon, which was capable of making the plutonium used in nuclear weapons.

Yet despite the occasional flare-up, little is truly known about this secretive relationship, Petrov told GlobalPost.

Today, Syria is the only Mediterranean nation to maintain diplomatic relations with North Korea without formally recognizing the South.

Experts believe that North Korea has used Syria as a base for covert operations in the Middle East, sending weapons and advisers to now-defunct revolutionary groups in the region. North Korea’s motives abroad have been shifting. In the past, the Kim dynasty was eager to spread its ideology of national self-reliance, aiding developing nations that opposed American dominance. Since the late 1970s, Pyongyang has taken a more pragmatic turn, peddling weapons and equipment around the world to raise much-needed hard currency.

An early sign of the Syria-North Korea alliance emerged in 1973, when Pyongyang sent advisers and equipment for Syria’s sneak attack against Israel during the Yom Kippur War. After Syria and Egypt lost, North Korea sent its artisans to build a commemorative museum in Cairo.

Since then, Pyongyang is known to have sent advisers and a variety of materiel to its friends in Damascus. The operations have even advanced the career of one former elite hardliner, Gen. Kim Kyok-sik, who was a right-hand man of Kim Jong Un and his father, Kim Jong Il. (Late last month, however, the Supreme Leader may have fired the general for reasons unclear.)

The espionage and mystique have raised questions among some watchers over whether the Mossad, the Israeli spy agency, was connected to a massive North Korean train explosion in 2004 — which flattened part of the surrounding city and, the Sankei Shinbum has claimed, killed several Syrian technicians.

In opaque North Korea, the allegations have never been proven; instead the government, along with South Korean intelligence officials, suggested a chemical leak ignited the blast.

As with anything related to the world’s most secretive state, a shroud covers the North Korea-Syria relationship too.

Although diplomacy is hardly Pyongyang’s strong point, its state mouthpiece has announced its opposition to what it calls the “imperialists” intervening.

Meanwhile, North Korea, as usual, will be watching carefully as its ally comes under possible attack from abroad.