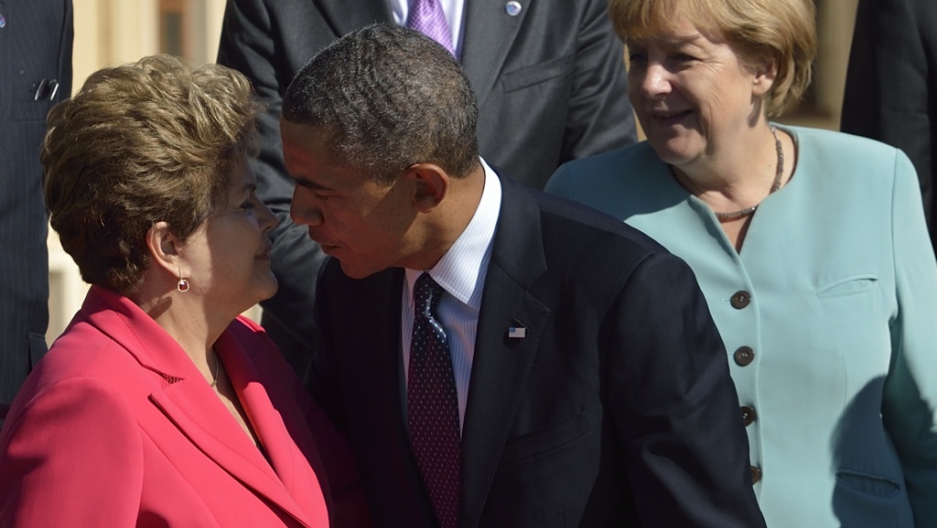 LIMA, Peru — Just when it seemed the G20 meeting in St. Petersburg, Russia, couldn't get more awkward for Barack Obama, the US president has been served a large portion of humble pie from an unlikely quarter — his Brazilian counterpart Dilma Rousseff.

She has been angered by the recent National Security Agency revelations from uber-leaker Edward Snowden, that US spies eavesdropped on her emails and phone calls, along with those of Mexican President Enrique Pena Nieto.

Obama and Rousseff held an impromptu one-on-one meeting Thursday to discuss the embarrassing allegations, arriving late for the formal dinner with the other heads of state.

But that may be the least of it.

Today, she threatened Obama with the humiliation of canceling her scheduled visit to Washington next month if the United States failed to respond satisfactorily to her concerns.

In a statement, Rousseff claimed that Obama had promised to clear up the matter directly with her by next Wednesday, adding that the alleged spying was “incompatible” with an amicable bilateral relationship.

"Given my skepticism due to the lack of results from the meeting between [Brazilian] Justice Minister Jose Eduardo Cardozo, and Vice President [Joseph] Biden … President Obama reiterated to me that he took personal and direct responsibility for both the investigation of the complaints and to provide measures that the Brazilian government considered appropriate," Rousseff said.

And to show she is not messing around, the Brazilian president has already called off a trip to the US by her personal aides to prepare for her own visit.

Mexico's president also said, in an interview with the BBC, that Obama promised "a full investigation" into the spying allegations and "if they turn out to be true to impose corresponding sanctions."

In response, Obama today made some conciliatory sounds, but also offered a note of dissimulation that may sit ill with Rousseff and other critics of the NSA spying.

“What we do is similar to what countries around the world do with their intelligence services,” Obama said in televised remarks. “But what is true is that, you know, we are bigger. We have greater capabilities. Just because we can get information doesn’t necessarily always mean that we should.”

If Rousseff’s own visit falls through, it would represent a serious humiliation for Obama.

Hers was the only full state visit to the White House scheduled this year, and the first from a Brazilian president in nearly two decades. Calling it off would be no less of a slap in the face than Obama’s recent canceling of a bilateral summit with Russian President Vladimir Putin over the latter’s offering asylum to Snowden.

A falling out with Brazil is the last thing Obama needs right now as he struggles to round up an international quorum for airstrikes on Syria. Just 11 of the Group of 20 economic powers participating in the summit signed a statement condemning the Aug. 21 chemical weapons attacks in Syria, but which fell short of calling for military action.

It would also show once again how badly the NSA scandal has undermined Washington’s global standing.

Brazil has, after the US, the Western Hemisphere’s second-largest economy and population, and wields considerable influence, particularly in Latin America and the developing world.

Although a leftist, Rousseff is a pragmatic moderate and has maintained friendly, albeit cool, relations with Washington that are a far cry from the open hostility of more populist South American governments such of those of Venezuela or Ecuador.

Indeed, when Snowden recently applied to Brazil for asylum, Rousseff’s administration said the application did not even merit a response.

Nevertheless, she's under pressure at home after a wave of national protests against government corruption and poor public services, while Brazilians share the sensitivities of many Latin Americans fostered by a history of the US’ often heavy-handed interventions in the region.