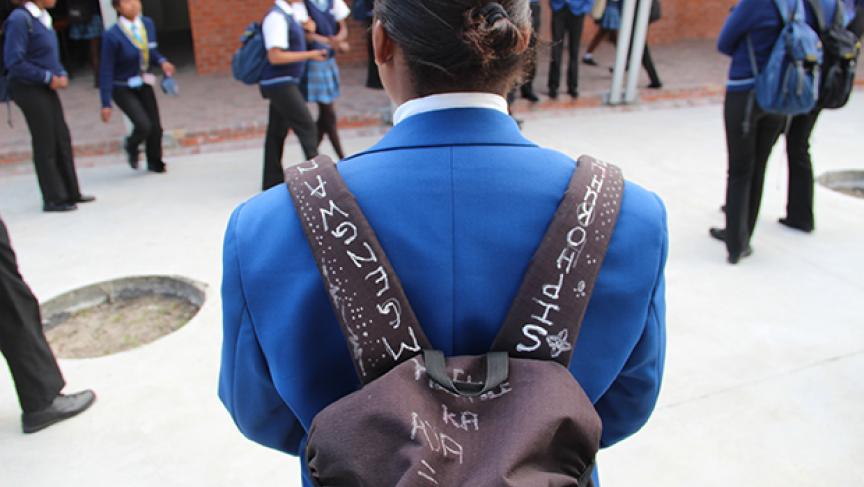 At the Centre of Science and Technology (COSAT), a high school in the low-income township of Khayelitsha, a group of girls recently gathered in the school courtyard. They wore matching blue sweaters and plaid skirts – the usual COSAT uniform. Each girl also had a backpack, with a message painted on in whiteout. Zandile, a senior, had written on the back and straps: “Sorry boys/girls education comes first.” Twelfth-grader Zandile says the message on her bag helps her stay focused on her studies. (Photo: Anders Kelto)

Zandile said she gets a lot of attention from boys at school. She has a boyfriend, but said she always tries to follow the philosophy on her bag – education first.

“I do my homework, I read my books, I do everything that involves my academics,” she said. “Then I can hang out with him and go out and have some fun.”

Behind the school, Sxolele, an eighth-grader, was sharing a small bag of potato chips with a friend. She also had something painted on her bag: “Life was never meant to be easy.”

“I wrote it because sometimes in life you face difficult challenges,” Sxolele said. “So I decided that, maybe that’s how it is in life. It was never meant to be easy at all.”

She said she sometimes feels that way about her own life – especially when she’s alone, and feels like she doesn’t have friends. She also recently lost her grandmother, who was helping raise her, and she said that inspired her to write the message. 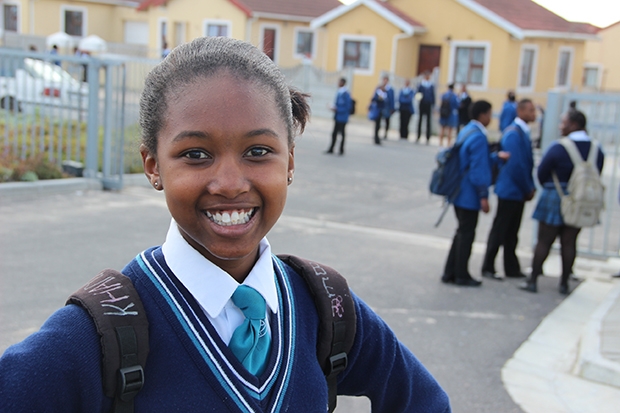 None of the students knew when this tradition of painting backpack messages began. Teachers said it’s been around for years. It seems to be mostly girls who do it, and the messages are, in general, positive reminders.

By the school entrance, ninth-grader Khanyisile – who also goes by Princess – said this was the first year she had written on her bag. She said her family is very poor, and lives in a small shack not far from school. She wrote this message on her backpack: “Yes I am poor but I am going somewhere.”

“I’m going to far places, bright future,” Khanyisile said. “I would like to go to America when I’m old, when I’ve got [money] and all of that.”

Khanyisile said she reads the message on her bag every day before she walks to school, because it reminds her that life is getting better.