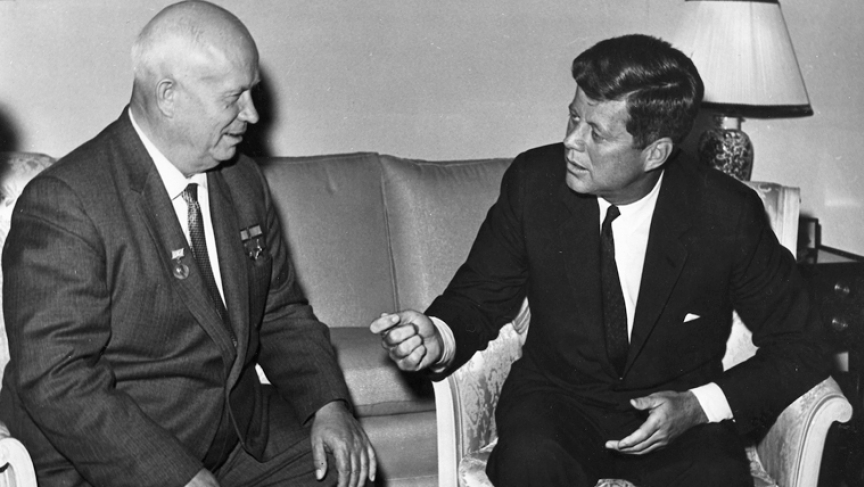 President Kennedy meets with Chairman Khrushchev at the US Embassy residence, Vienna.

US Dept. of State photograph in the John Fitzgerald Kennedy Library, Boston.

The famous 'hotline' between the White House and Kremlin turns 50 this summer.

It was in 1963 when President Kennedy and his Russian counterpart, Soviet leader Nikita Khrushchev decided they needed direct contact to deal with times of crisis and emergency between the two super powers.

But the image often depicted in films and novels of a red telephone was not reality. It was actually a tele-typewriter equipped for written messages not voice calls.

"It was a data line from the very beginning and still is," says former US Ambassador to the USSR Jack Matlock. "It was calculated to be that because the idea being is that if you put something in writing it tends to take some of the emotion out of it and in a crisis situation you didn't necessarily want a situation where tempers might flare."

It was the 1962 Cuban missile crisis which brought the world to the brink of nuclear war which originally prompted the setting up of the hotline.

Jack Matlock says the process of getting messages between the two leaders before it was installed could be a hugely tedious process. He remembers: "To translate the entire message could take around two hours and of course we had to check everything. But then it had to go on a telegraph form and that go to our code room which in turn would be rekeyed and then transmitted. President Kennedy was upset it took so long. So, it was thought we needed something more instantaneous to get a message between the leaders."

So, the Russians agreed with Kennedy and the Hotline was installed on August 30, 1963.

Matlock adds: "The link was really there in case there was a sudden emergency like an accidental launch of a nuclear missile and you've got let the other side know in seconds. It's available for that."

But the line wasn't used seriously until 1967 by President Lyndon Johnson during the Six Day War between Israel and its neighbors.

"The message came in at about 7:35 in the morning saying the war had broken out sometime in the middle of the night our time," says Dr Hal Saunders, one of the Middle East experts advising the President at the time.

"That message was answered within an hour. So within a period of a couple of hours you could have a message and a response."

A response within an hour seems slow by today's standards, but this was a ground-breaking development in communications and Dr Saunders thinks having the line in 1967 did prevent a potential clash between the two super powers: "We always worry in the Middle East that any conflict which we become engaged in could escalate into a nuclear exchange between our two countries. So, the hotline ran its gamut from the very first messages in which we both said, 'Let's stay out of this right down to the end.'"

You'd think in these days of much improved mass communication there would be little need for the hotline but new technology isn't always reliable and a direct–no interference–link between the two leaders is still considered necessary.

"Given the fact that we're still the two largest nuclear powers and because we both keep missiles on alert to have the ability to communicate instantly is extraordinarily important," says former ambassador Jack Matlock.

Tensions exist between the US and Russia to this day, but it's not known whether the hotline is being used during the current stand-off around Syria.

Experts believe though that it has been crucial in maintaining the peace between the two countries over the past five decades.