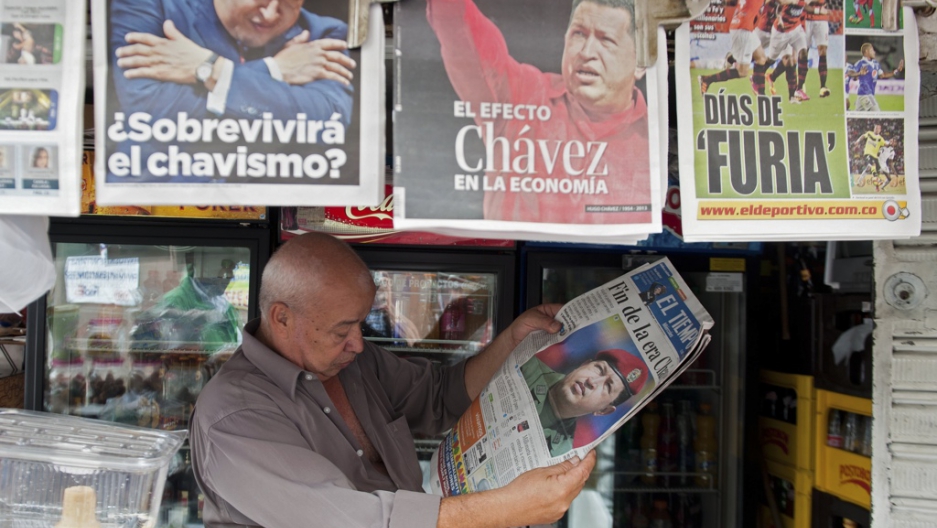 Will all the news that's fit to print cease to be printed in Venezuela?
Credit: Luis Robayo
Share

CARACAS, Venezuela — While the American press decries plunging print readership and advertising revenue, newspaper editors in Venezuela are struggling with a much more fundamental problem: The country is running out of newsprint.

Thanks to the South American nation’s currency controls and short supply of US dollars, editors and importers are unable to obtain the hard currency required to pay for newsprint manufactured abroad.

“I only have enough paper for around 25 days,” said Juan Carlos Escare, the editor-in-chief of Mundo Oriental, a newspaper in the central state of Anzoategui. “We’re in crisis.”

His newspaper covers a small population of about 400,000 people. “If my paper doesn’t go out, those people don’t have information,” he added. “Also, we employ around 85 people. If we can’t get paper, we can’t publish and we can’t pay their wages.”

More than half the country’s local press is within weeks of going out of print, with at least five newspapers already having gone under, according to numerous editors and industry leaders across the country who spoke to GlobalPost. It's the latest sign Venezuela's private businesses are still struggling with former President Hugo Chavez's economic policies six months after his death.

“Some newspapers have had to cut their print runs, others only have a few weeks left of paper,” said Carlos Correa, president of Open Space, a Caracas-based organization that focuses on human rights and freedom of speech.

Rogelio Diaz, head of the Regional Press Organization, pointed to a downward trend. “Provincial newspapers are going out of print,” he said. “Papers that used to contain 32 pages now have 24. Those that used to have 24 pages, now have 16.”

Smartphones, tablets and web access are not as ubiquitous as they are in the more developed world, so few newspapers are making a serious jump to the internet or mobile.

Chavez introduced currency controls in 2003 in order to stem capital flight. The government would make dollars available to those who wanted to travel outside the country as well as importers at the official rate. Dollars sell on the black market for six times their “official” value.

However, analysts say, the methods used have proved to be far from sufficient in meeting demand, leading to shortages of everything from chicken to toilet paper.

Importers of newsprint — and other items not produced in Venezuela — must first obtain a certificate of non-domestic production from the Ministry for Commerce. These certificates, according to editors and importers, are being denied.

“The certificates aren’t being delivered and therefore the media is in crisis, because of the lack of paper,” Diaz added. “If they don’t have certificates, they don’t get paper.”

These certificates, which show that the importer requires dollars in order to bring in a product not produced in Venezuela, must then be given to the government’s Commission for the Administration of Currency Exchange (CADIVI), infamous for its bureaucracy and alleged corruption.

CADIVI will then finally provide the hard currency.

CADIVI organizes the distribution of dollars to people and companies in Venezuela. Venezuelan authorities have tested other mechanisms for exchange, offering dollars at a slightly lower rate than the official one, but those have failed to satiate the thirst here for dollars.

That’s despite the country’s access to the world’s largest oil reserves, according to the oil exports group OPEC.

“We don’t have dollars but the oil price is more than $100!” exclaimed Tinedo Guia, president of the National College of Journalists. “Venezuela clearly is not administering its resources well.”

Economists are not hopeful. Neither are Venezuelans, who have seen prices rise a staggering 42.6 percent in the 12 months leading to July, one of the world’s highest inflation figures.

“Unfortunately, we do not see any inclination that the authorities are ready to embrace conventional policies to deal with a highly inflexible and utterly unsustainable foreign exchange regime, which is leading to growing levels of shortages, scarcity and inflationary recurrent devaluations,” Alberto Ramos, an analyst at Goldman Sachs in New York, said.

When it comes to shortages, “things are going to get worse,” added Angel Garcia Banchs, director of Caracas-based consulting firm Econometrica.

Venezuelans saw another example of the government's inability to provide the basics on Tuesday when 70 percent of the country lost power for the afternoon. Unlike the more regular outages, which affect mainly rural areas, Tuesday's problems hit the capital city Caracas itself.

Maduro later appeared on television blaming the "extreme right" for "sabotage," but provided no evidence to support the claim.

“The official intention is to control the independent press,” Diaz said.

But it’s not only newsprint that is lacking here. Venezuela has long suffered shortages of basic goods — including chicken, cooking oil and, most infamous, toilet paper.

Carlos Ortiz is a graphic designer based in Caracas. He needs paper for his business just as much as the press.

“It’s the backbone of our business, having paper. Not having paper is not having a job,” Ortiz said. “Some of our competitors have shut down their businesses.”

“This is the worst we’ve had it,” said Adrian Corral, who runs Grialca, one of the country’s major newsprint importers. “Maybe I need to look into another business.”