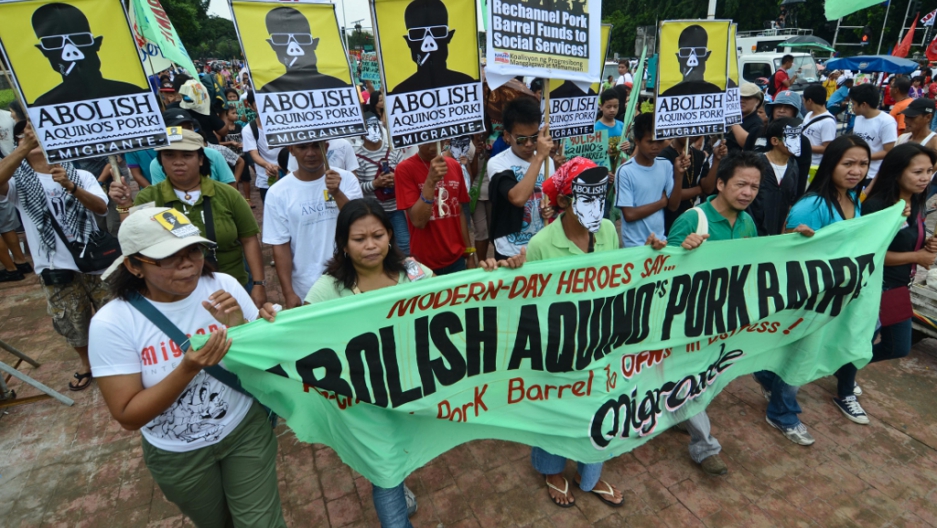 BANGKOK, Thailand — Before her family was blamed for epic corruption, 23-year-old Jeane Napoles was virtually unknown outside Philippine high society.

Her Instagram and Tumblr accounts documented glitzy shopping sprees and run-ins with two of the world’s most-famous Justins: Bieber and Timberlake. She gushed about her Grammy Awards invite and her “Porschey.” She even identified her own address within a posh Los Angeles zip code — which suggests she never could have imagined herself as a focal point for mass outrage.

Today, most of her social media accounts are deactivated and the aspiring fashion designer has gone silent. Her mother, Janet Lim-Napoles, has surrendered herself to authorities. And the Philippines is roiling over allegations that their family grew extremely rich from one of the biggest government embezzlement schemes in the nation’s history.

The Philippines’ top TV network has even referred to the young woman as “Imeldific,” slang for over-the-top flashiness reminiscent of Imelda Marcos, the former Philippine dictator’s wife infamous for owning more than 1,000 pairs of shoes.

Filipinos are hardened to corruption. Politicians are assumed to be on the take and the rich are assumed to be nearly untouchable. But an alleged 10-year embezzlement scam worth $224 million — a whopping figure even by Philippine standards — has stunned the nation and caused a top cardinal to publicly sob.

“It’s like your heart is broken into pieces ... can one really do this to one’s neighbor?” said Manila’s Archbishop Luis Antonio Tagle in an August press conference. “Can one really stomach inflicting this kind of damage on the country?”

The Philippine Daily Inquirer, which first exposed the allegations, has struggled to convey the enormity of $224 million in a nation where the average family pulls in less than $400 per month. According to the paper, that sum is worth 25,000 schools. Or six f/A fighter jets. Or 76.9 million Big Mac value meals at McDonald’s.

All that cash was meant to benefit a largely impoverished public. But whistleblowers cooperating with the National Bureau of Investigation — the Philippines’ answer to the FBI — insist it was swallowed up by a network of politicians and their conspirators. An affidavit claims government funds were poured into “ghost projects”: sham pork barrel programs run by private business owners colluding with elected officials to secretly hoard the money.

The original whistleblower is a former personal assistant to Lim-Napoles, owner of a business called the JLN Group of Companies. According to its Web site, the company’s mission is to “sustain growth, economic strength and otherwise... to the marginal and peasant sectors of society.” The organization claims to operate in an uncommon jumble of industries: agricultural science, biometrics and theft detection.

Philippine investigators are now exploring the whistleblowers' claims that Lim-Napoles masterminded the embezzlement network. She has denied the claims but her attorneys, according to The Inquirer, have retaliated by calling her main accuser a “habitual user of the illegal drug ecstasy,” as well as a man struggling with “gender confusion and sexual indiscretions.” The embezzlement investigation is ongoing; Her confinement is actually owed to charges she helped kidnap the former assistant to hold him captive at a priest’s home.

Though the scandal has produced plenty of soap opera-worthy theater, it has also given rise to a feisty anti-corruption movement.

“Pork Barrel Protests” — named for the government program from which cash was allegedly drained — amassed roughly 100,000 people in a Manila park on Aug. 26. They have vowed to return if leaders don’t kill off programs perceived as corrupt. The movement remains vibrant on Twitter under the hashtag #scrappork. The watchdog group Transparency International, which puts Philippine corruption on par with that of Mexico, has proclaimed that the public regards the case as “revolting, shocking, atrocious, appalling, shameless.”

Courts have yet to convict Lim-Napoles of embezzlement — she hasn’t even been formally charged with the crime — and yet, in the court of public opinion, she is the face of this scandal. As investigators gather evidence, so do internet sleuths who portray her daughter Jeane’s social media exploits as proof of the family’s unusually exorbitant wealth.

Jeane Napoles’ varied posts depict a young woman with a haute couture obession and plenty of cash to pursue her hobby. On Instagram, she wrote: “Mom, sissy and I wiped out the Celine store,” an elite LA handbag shop owned by the Louis Vuitton Moet Hennessy consortium. On Tumblr, beneath a photo of her riding in a chauffeured luxury car bound for the Grammy Awards: “what i wore. Baby Pink Herve Leger Dress, Chanel Pumps, Black Chanel Clutch :)”

A prominent lawyer and blogger, Berteni Causing, accused the young woman of “using people’s blood for her own happiness” and called for her wardrobe's confiscation. A reporter for the Manila-based online site Rappler investigated her property holdings in Los Angeles. Both have been sued for libel by the Napoles family. The libel complaint, according to the Philippines’ Center for Media and Responsibility, claims the articles caused Jeane Napoles so much anxiety that she was hospitalized.

When pressed about her outrageous wealth in the early 1990s, Imelda Marcos ascribed her riches to a secret stash of World War II-era gold looted by the Japanese. Lim-Napoles has insisted that her family grew rich off coal, not corruption. After repeatedly refusing to investigate the so-called “pork barrel” scandal, lawmakers finally conceded in late August that the case has merit and agreed to probe the claims.

Meanwhile, Tagle, a cardinal believed by many Filipinos to have a shot at the pope’s throne, is urging any lawmaker guilty of the alleged crimes to visit Philippine slums and behold the plight of the poor.

“Maybe you could walk around at night. And when you reach the alleys where the poor live, you can see... families who open their carts to sleep there,” Tagle said in a speech. “Hold their hands. I hope it will move your hearts.”