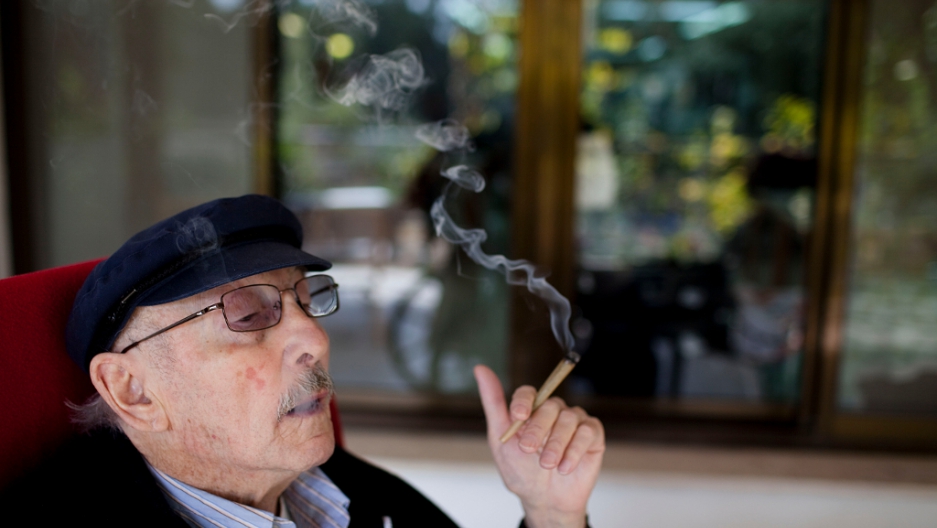 Israel has been on the forefront of medical marijuana use for decades.
Credit: Uriel Sinai
Share

KIBBUTZ NAAN, Israel — It may come as a surprise that the THC — the active element in cannabis — that has been used for investigations by the National Institutes of Health in Washington, DC, was imported from Israel at a time when no American scientist could hope to receive funding for research involving marijuana.

In a 2010 book, Israeli scientist Raphael Mechoulam, who first synthesized THC, recalls how it all began: In the mid 1960s, after a US senator inquired about the safety of his son's pot habit, Dr. Dan Efron, the National Institute of Mental Health’s head of pharmacology, flew to Israel and "took with him the ‘world’ supply of tetrahydrocannabinol [THC] … Much of the early work in the United States in the cannabis field was done with the material that Efron presumably smuggled out of Israel into the United States."

For serendipitous reasons — such as premier research facilities and leniency toward scientists — Israel has long been at the forefront of cannabis research.

For the last 30 years, it has also been on the leading edge of countries that legally dispense medical cannabis.

The diagnosis of an array of medical miseries such as Crohn's disease, multiple sclerosis and chronic pain grants any citizen the right to buy and use medical cannabis. (Tourists, take note: Recreational marijuana is illegal in Israel. You will not find pot cafés lining the pretty boulevards of Tel Aviv.)

Out of a population of 8 million, slightly over 11,000 Israelis hold prescriptions. Since the early 1990s cannabis has been grown in regulated farms and distributed via registered dispensaries, where each patient can choose among capsules, cookies, extracts, meticulously weighed dried leaves or pellets to be vaporized.

Inbal Sikorin has become one of the unlikeliest advocates for medical cannabis. For many years the head nurse at Hadarim, a nursing home that houses mostly catastrophic cases at Kibbutz Naan, an hour from Tel Aviv, she is famous here for successfully using cannabis to treat geriatric patients.

Sikorin, 44, is a chain smoker who sports a short, spiky head of jet-black hair. For many years, she never thought of medicating her patients with cannabis. In fact, the idea troubled her. She was raised in a home where marijuana was "something other people did — misfits, homeless people. It was nothing I ever had anything to do with, or wanted to," she says.

Then she encountered a severely disabled patient, tethered to a feeding tube. The woman screamed constantly in pain and was unresponsive to people or medications. Science’s arsenal of medicines — antipsychotics, L-Dopa drugs and analgesics — had no effect.

The patient's family asked Sikorin to investigate whether cannabis could help, and drew her attention to "Prescribed Grass," a documentary on the medical uses of the drug, by Tel Aviv University researcher Zach Klein.

Today, the patient is quiet and serene. Seated in a wheelchair in front of a TV, she turns when she hears her name, then looks back at the screen.

She is fed with a spoon.

One of the most remarkable facts about Hadarim is that not a single one of its acute care patients is on a feeding tube, a situation almost unheard of in any acute care facility.

Nineteen of its 36 patients are prescribed some form of cannabis.

"I feel like this is a God-given drug that we can give these people," Sikorin says, "but people hearing the word cannabis still react as if it were something from Satan. We face real opposition."

Even with liberal policies and internationally recognized research, Israel's conservative medical establishment remains skeptical and often places obstacles before professionals in the field.

Dr. Boaz Lev, the associate director general of the Ministry of Health, is a skeptic.

"Despite the fact that many patients say cannabis helped them, it is hard to prove anything," Lev says. "It is hard to conduct double-blind experiments. Most of this involves giving out smoking cannabis or oil extraction so it is kind of difficult. At this point, despite the fact that there are a lot of subjective reports of the benefits, the medical establishment does not accept cannabis as a mainstream treatment."

Asked about a patient like Sikorin's, Lev impatiently interrupts. "Yeah, yeah, I get it. They gave her cannabis and after a month she is dancing. So? This is not science."

Not everyone agrees. Avinoam Reches, a professor of neurology at Jerusalem's Hadassah Medical Center and the chairperson of the ethics committee of the Israel Medical Association, says "the proof is in the pudding. If a Parkinson's patient suffers from muscle rigidity that impedes his sleep and by smoking half a cannabis cigarette, gets muscle relaxation and calmness and is able to sleep well — and says thank you! — what scientific investigation do we need?”

Sikorin has teamed up with Klein, of Tel Aviv University, to conduct further research.

Numerous studies show that medical cannabis has a beneficial effect on Alzheimer's patients. In one of the most extensive studies conducted so far, Sikorin and Klein followed the progress of 60 dementia patients over three years.

The results have been astonishing. All the subjects of the study saw improvements. And, crucially, none — zero — suffered adverse side effects from the prescribed cannabis.

Sikorin and Klein have yet to publish their results but word has gotten out. Montel Williams, who has multiple sclerosis, recently filmed an episode of his show at Hadarim.

"You know the biggest difference since we started using cannabis at Hadarim?" Sikorin asks, opening her arms to the main lounge. "It is this quiet. You never see something like this in an acute geriatric ward. People wail. They have spasms. They cry out. That's the norm. That's what it was like here, until this heaven-sent drug."