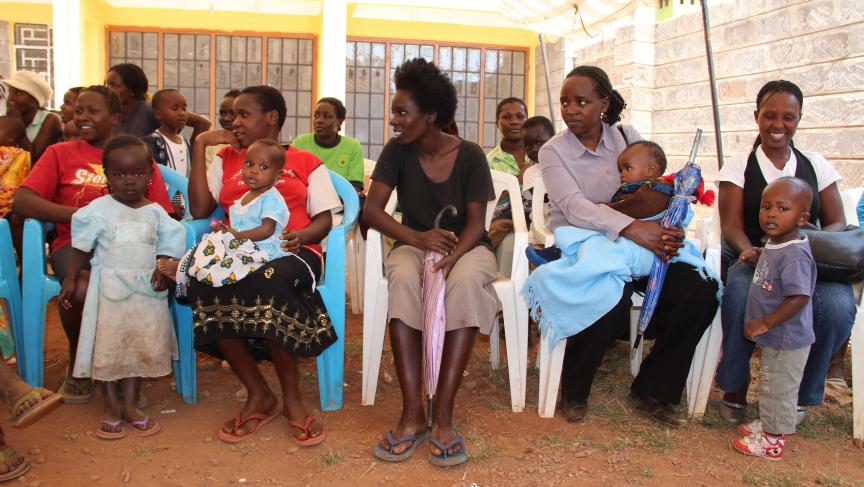 Women wait at a health clinic in Nairobi. (Photo by Anders Kelto.)

At a health clinic set up outside an old stone church in Nairobi, Kenya, women wait in line under a large tent while children run across the grass. I ask one woman, standing with a young child in her arms, why she is here. She says she would prefer to talk in private, so we step inside the church.

The mother gives her name only as Josephine. She has two kids – ages one-and-a-half and seven. She says that's enough children for her.

"[My husband] wants two more children," Josephine says, "but he doesn't make very much money, and he doesn't pay for anything. Even when the kids are sick, he doesn't give me money for the doctor."

Josephine came to the clinic today to get on birth control. Her husband doesn't know she is here. She is scared that if he finds out she is using contraception, he will leave her – or become violent.

"Most of the time, it is a secret," says Joan Ondiro, a community health worker who helped organize today's clinic.

Ondiro says Kenyan men often want a lot of children, even if they can't provide for them. That's because children are a status symbol and a source of pride. And, she says, even when men don't want a lot of kids, they rarely talk about family size with their wives.

"Around here, men think that family planning is a woman's issue," Ondiro says.

As Ondiro talks, I look around the clinic and notice something: there are almost no men here. I ask her where I can find them, and then I go there.

Inside a local bar, six men at a low-set table pour bottles of cold beer into plastic cups. One of the men, named David, is in his mid-40s. I ask how many kids he thinks a man should have. He says a lot – assuming he can afford them.

"As long as you have money, what's the problem?" he says.

I ask what he would do if his wife didn't want a lot of kids.

"I'd just have to get another one," he says, laughing.

Several other men agree with David – that it's okay to leave your wife if she doesn't want a lot of children. Others tell me they are opposed to contraception because it is against their religion.

Harun, 30, has a different reason for opposing birth control. He says women who use it can't be trusted.

"They will just go out and have sex," he says, "because they know that they cannot give birth."

Health organizations say this is a common belief. And there are other misconceptions – for instance, that birth control causes women to lose their sex drive, and that vasectomies leave men impotent.

One organization that is trying to change men's attitudes about family planning is called Tupange. It organizes events – like bike races and soccer tournaments – that attract men, and it hires male health educators to go to workplaces and community centers to talk to men about contraception and family size.

Peter Kagwe, a project manager for Tupange in western Kenya, says when it comes to these issues, it's important that men talk to other men.

"Basically, we've seen that has more impact," Kagwe says. "[Men] want to see one of their own."

Kagwe says the male health workers talk personally about the benefits of having fewer children. For example, a health worker who has just two kids might explain that keeping his family small leaves his wife more time to take care of him, while also enhancing the couple's intimacy and standard of living.

Kagwe says the workers are careful to appeal to a man's sense of pride and his need to feel like he is in charge of the household. They encourage men to take control over how many kids the family has, by using contraception or getting a vasectomy.

Back in Nairobi, near the health clinic at the church, a team from Tupange recruits clients to take advantage of its family planning services. Mark Mwangi, a male health worker, says more and more men are showing up.

"Especially the young ones accompany their wives or their partners," Mwangi says.

Mwangi says he has noticed a generational shift – younger men are more willing to talk about birth control, and to use it themselves. As he tells me this, a young man walks up and asks where he can get a vasectomy.