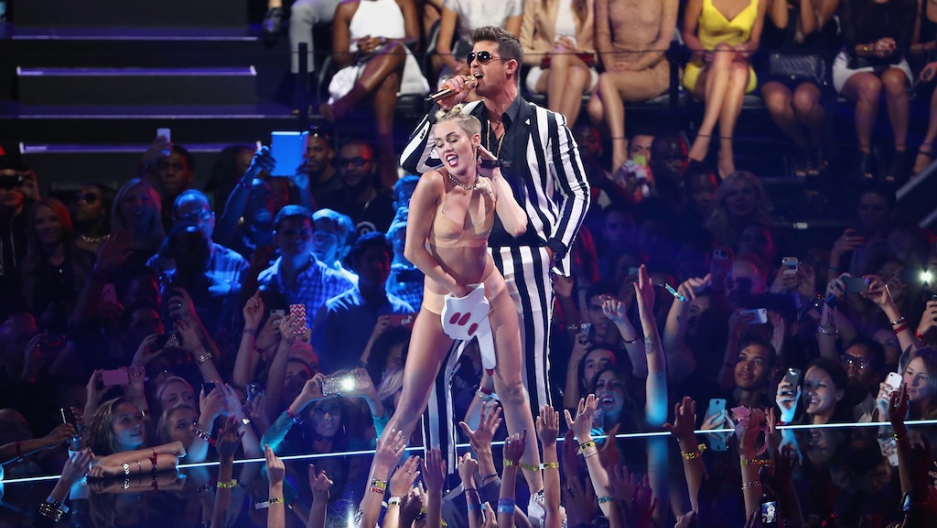 Viewers of the MTV Video Music Awards on Sunday night got an eye full of pop star Miley Cyrus when she shimmied onstage for a raunchy performance of her hit song "We Can't Stop".

Celebs in the audience were caught averting their eyes as Miley strutted around in a skimpy leotard twerking with dancers dressed as giant teddy bears.

She later rubbed her face in a dancer's behind and had enough crotch grabs to make Michael Jackson blush.

But it was Robin Thicke who found himself on the receiving end of Miley's... um, assets during the rauncy performance.

Miley stripped off her leotard down to a nude bikini to twerk her way through Thicke's mega-hit "Blurred Lines".

She spent a good amount of the song rubbing Thicke's crotch with a giant foam finger.

"Miley better go get a pregnancy test after all that grinding," comedian Kevin Hart joked after the performance.

Thicke's mother was not impressed with the 20-year-old pop star's proximity to her son's nether bits.

Gloria Loring told OMG! Insider, "I don't understand what Miley Cyrus is trying to do. I think she's misbegotten in this attempt of hers. And I think it was not beneficial."

She added, "I didn't get what her point was. It was so over the top as to almost be a parody of itself."

"Miley was the one star in the room who truly understood what the MTV Video Music Awards are all about — waggling your tongue, grabbing your crotch, rocking a foam finger, going to third with the Care Bears, twerking and shrieking and acting out America's goriest pop-psycho nightmares."

Miley told MTV before the show that she was planning a stunt to top Madonna and Britney Spears' iconic kiss from a decade ago.

Those poor teddy bears didn't even see it coming.