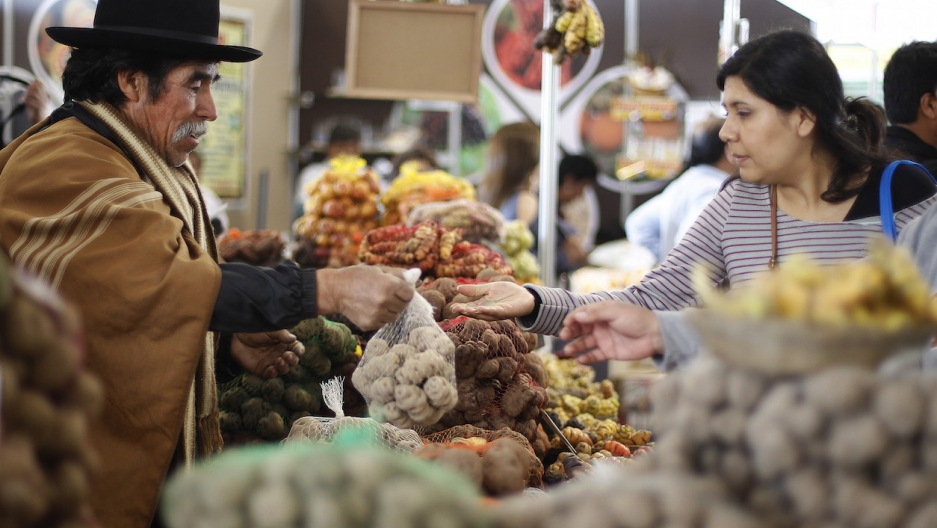 LIMA, Peru — Peru’s spectacular cuisine has long been its best-kept secret. But word is finally beginning to spread about the highly varied, original and just downright yummy cooking here.

The melting pot, so to speak, of culinary influences includes Spanish, French, Italian, Chinese, Japanese, African, and, of course, indigenous, providing collisions of taste and texture that are often surprising and always delicious.

But Peru’s stunning natural pantry, stocked with exotic ingredients from the Amazon, Andes, coastal plain, and the Pacific, is also unrivaled.

“Many of the ingredients are unique. You simply can’t find them anywhere else,” says Ericka la Madrid, who runs gourmet travel company Delectable Peru. She should know, having lived 12 years in Florida, where she missed them every day.

Peru has many chili species, known here as “aji” (pronounced ah-HEE). This one, the tiny aji charapita, is the diameter of a fingernail, ferociously spicy, and grows in the rainforest. It is a mainstay of Peru’s Amazonian cooking, and is often served diced as a freshly made hot sauce to accompany meat dishes.

With a sweet, creamy white flesh, a little reminiscent in taste of natural yogurt, the chirimoya (pronounced chee-ree-MOY-uh) typically grows in the cloud forests where the eastern Andes overlap with the western Amazon, the same lush, rugged terrain as that around the breathtaking ancient Inca city of Machu Picchu. The best way to eat this is fresh, with a spoon. Now cultivated from Hawaii to the Middle East, Mark Twain once described the chirimoya as “the most delicious fruit known to men.”

Sometimes known in English as “eggfruit,” lucuma (pronounced LU-ku-mah) is a Peruvian classic if ever there was one. Grown in the Amazon and with a soft, floury, orange flesh, it’s used in desserts, something of an obsession for sweet-toothed Peruvians. Lucuma ice cream is as common here as scoops of chocolate or vanilla. But the most traditional Peruvian lucuma recipe is an addictive mousse.

Like Mexico, Peru has numerous local species of corn, or “maiz,” most of which are a long way from the sweet corn you’ll find at Safeway. Colors and sizes vary, as do uses, which include “chicha morada,” a refreshing, sweet drink made from purple corn; “canchita,” dried ears of corn with a sprinkling of vegetable oil and salt served as an appetizer, a little like peanuts; and “choclo,” huge ears of corn served boiled along with many dishes, including ceviche, the marinated seafood salad that many regard as Peru’s national dish.

So, we’re guessing you probably have heard of the potato before. But not all 3,000-plus varieties grown in the Peruvian Andes, the cradle of origin of this world-conquering tuber. They come in a bewildering variety of shapes, colors and sizes, and the more obscure are often referred to in Peru as “papa nativa,” meaning “native potato.” This one is called the “Huayro macho” (pronounced WAI-roh MA-cho) and has trademark internal red markings. Grown in southern Peru, it’s slow to ripen and can be boiled, pureed, fried or, just about anything else you might want to do with a potato.

Succulent and bittersweet, this small fruit was once a favorite of the Inca aristocracy. Growing in bushes in the lower Andes, it’s now mainly used to make preserves. There are few better ways to start the day than with a crusty Peruvian bread roll with aguaymanto (ag-wai-MAN-toh) jam and a cup of Peru’s premium organic java.

Similar in appearance to its cousin, the potato, olluco (pronounced oh-YU-koh) can be grown for its spinach-like leaves. But in Peru, it is primarily grown, high in the Andes, for the tuber. It has a crisp texture, a little like an onion but without the layers, and is used in the hearty classic “olluco con charqui,” thin strips of olluco stewed together with charqui, a local form of jerky, and usually served with rice.

OK, so you’ve probably already heard of watermelon before. But not like this. Sandia bebe (san-DI-ah be-BE), literally “baby” watermelon, are the size of large olives and served here as a highly original garnish in salads. Like cucumber, they can be eaten with or without the skin.

A personal favorite, granadilla (pronounced gra-nah-DEE-yah) is native to the Andes but now grown from Australia to South Africa. Beneath its hard husk is a sweet flesh full of crunchy black seeds, similar in appearance to the inside of pomegranate. One way to eat this is by punching a hole in the outer layer and sucking the insides out. Granadilla also makes a delicious juice.

Another mainstay of Peruvian cooking that is largely unheard of elsewhere, huacatay (wa-ka-TIE), sometimes known in English as “black mint,” is an Andean herb often ground into a paste to flavor food. Check out “ocopa,” a starter of thick slices of steamed Peruvian yellow potatoes smothered in a creamy sauce heavily flavored with huacatay.