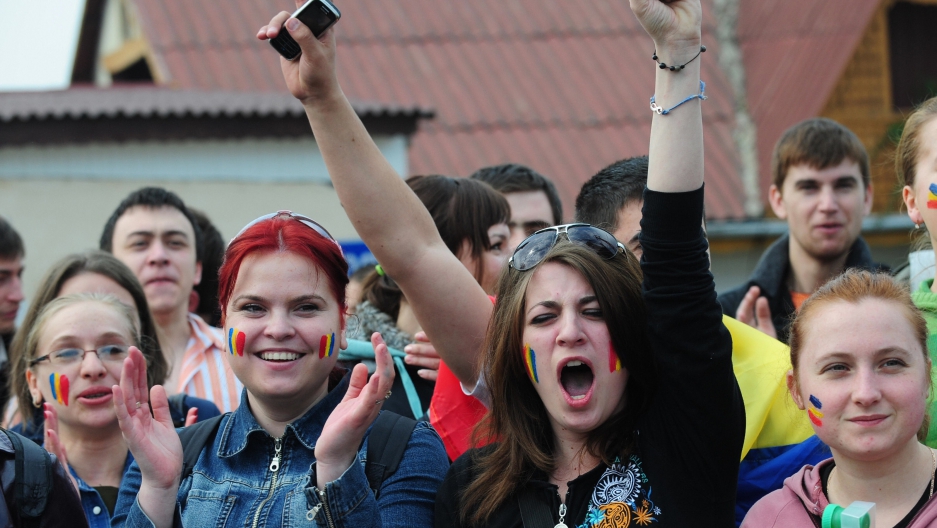 CHISINAU, Moldova — Dumitru Condrea has big plans, but an even bigger problem.

After six years working in civil society, the affable 25-year-old activist says his hope for change has eroded.

He says he loves his country, but has run out of options.

“If you want to change something, you need money. And I can’t make money here in Moldova.”

Like countless other young Moldovans, Condrea has set his sights on emigrating. He doesn’t know exactly when, where and for how long — only that it’s necessary.

The same logic has driven numerous waves of emigration from this post-Soviet nation of about 3.5 million — Europe’s poorest — since the communist collapse in 1991. Faced with some of the lowest pay in Europe — the average monthly wage is around $300 — and few opportunities for upward mobility, hundreds of thousands of Moldovans have looked beyond their borders for a brighter future.

Moldova’s news isn’t all bad. After a decade of post-Soviet decline, the country began patching together its broken economy and inching closer toward Europe in the mid-2000s. Hopes briefly rose in 2009, when a disputed election victory by the long-ruling Party of Communists prompted protests known as the “Twitter revolution,” a fresh vote and a change of regime.

But blocks away, impoverished retirees hawk homegrown fruit on dusty, unkempt street corners. The going rate, depending on which sunken-eyed babushka you ask, is around a mere 50 cents a pound.

Experts believe that a quarter of the working-age population has fled abroad to such destinations as Russia, Italy and Turkey.

Nearly 40 percent of the migrants are between 18 and 30 years old, according to the International Organization for Migration (IOM).

“These are the young, productive people who, if they had stayed in Moldova, would be involved in the labor market, delivering productive activities, marrying, having kids, sending them to school and so forth,” says Ghenadie Cretu of the IOM’s mission to Moldova.

Their absence is helping perpetuate a cycle of economic weakness. What’s more, Cretu adds, younger migrants tend to stay abroad longer. “That affects the demographic stability of the country in the long run,” he says.

Only 12 percent of the 34 percent of migrants with university degrees find work in their fields, according to Victor Lutenco, a former adviser to the prime minister on social issues. A mere 3 percent of the 26 percent of highly qualified workers tend to match their level of expertise, he adds.

That creates additional problems for the economy if and when those migrants return home.

“With time, the brain drain actually deepens into a brain waste because those people are working at a lower level and during that time they lose their qualifications,” he says.

The authorities have begun trying to combat the negative effects of migration by reconnecting with migrants with assistance from organizations such as the IOM.

Lutenco now heads the newly created Bureau for Diaspora Relations, formed late last year to “ensure a nexus,” he says, between the government and its citizens abroad.

Hoping to entice at least some of them to return home, the bureau plans to implement a range of economic incentives that would make it easier for migrants to reintegrate into Moldovan society.

Cretu, of the IOM, hopes the positive aspects of youth migration — such as the exchange of valuable ideas and experiences — may increase with government support.

But although economic trouble is the biggest “push factor” for young Moldovans to flock abroad, it may not be the only one.

Despite its progress, Moldova remains on the ideological and socio-economic cusp between Europe and the former Soviet Union.

The government plans to initial key agreements with the EU as part of the union’s Eastern Partnership program in November. But it has come under consistent criticism for failing to combat corruption and implement strong reform.

Sexual minorities also still face persecution from a conservative population heavily influenced by the Orthodox Church, and the Communists remain powerful in politics.

Such contradictions are discouraging 24-year-old Irina Baltag, a waste management professional, from remaining in her home country.

Born and raised in Moldova but educated in the EU, she laments — often with close friends — about what she says is the gap between official support for European values and their implementation on the ground.

The crooked education system, where some buy their way into university, first encouraged her to pursue a university degree in Lithuania. Next month, she plans to move to Germany.

She says Moldovans must learn that being European means more than simply being able to roam the continent visa-free. "That's really lacking here," she says. "The awareness of what it really means to integrate with Europe."