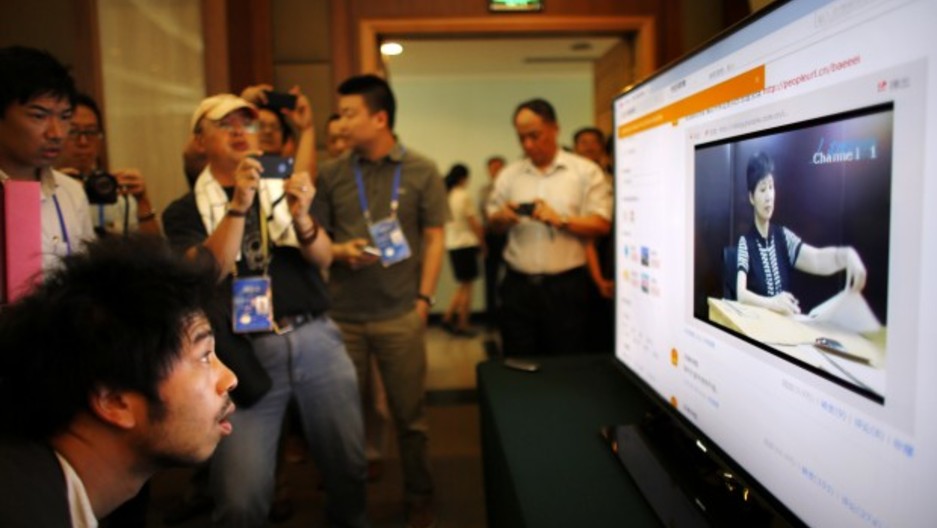 Journalists watch and take pictures of a screen displaying a court's microblog page showing a video of Gu Kailai, wife of ousted Chinese Communist Party Politburo member Bo Xilai at a media room near the court where Bo's trial is being held in Jinan, Shandong province August 23, 2013. Fallen politician Bo Xilai put up a feisty defence on Thursday as he faced China's most political trial in decades, saying he was framed in bribery charges against him and had admitted to them under psychological pressure during interrogation. REUTERS/Carlos Barria (CHINA - Tags: POLITICS MEDIA CRIME LAW) - RTX12TVT

Share
Contrast that with today, and the explosion of opinion in China about the trial of someone who could have risen to the heights of party Chair, Bo Xilai. The second day of the trial of former Communist Party leader Bo Xilai wrapped today. Foreign journalists are still barred from the courtroom but the government continued to post transcripts of the proceedings in real time. And the account has taken on a life of its own online. Rachel Lu is co-editor of the online news site, Tea Leaf Nation that analyzes Chinese social media.