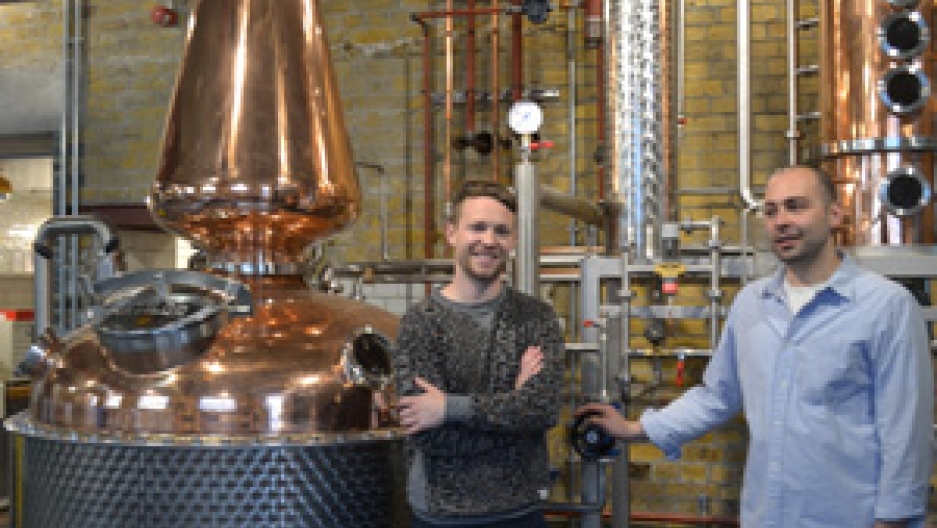 Testbed One sits in a quiet corner of south west London. It's a converted Victorian factory, a lofty brick space, just footsteps away from the river Thames. Inside lives an Arabian art gallery, a cocktail bar, an events space, and Christina and Matilda–two glistening, copper pot stills.

They're the pride and joy of the London Distillery Company. Christina is already producing London gin, and in the next few months, Matilda will be fired up to produce the first whiskey in the city for over a century.

The white tiled "gin room" is a bit like a mad scientist's laboratory. In fact, everything about this place is an experiment.

The gin is produced through a unique combination of traditional and vacuum distilling, and because they're not bound by the rules governing Scottish Whisky–spelled without the "e"–they don't have to use oak casks to age their spirit.

Founder Darren Rook says he's looking to the past for inspiration about barleys, yeasts and cask materials.

"Suddenly you've got this little catalogue of potentially historical spirits made on modern, innovative equipment".

The big question then, of course, is what will London whiskey taste like?

"We do expect something a little bit lighter and a bit more floral and fruity", says MacLeod-Smith.

But is he turning his back on his Scottish roots?

"I'm a massive [Scottish] whisky fan–there are so many distilleries up there doing a fantastic thing. Down here, because we're on a much more manageable scale, Darren and I are actually physically controling absolutely everything from the grain that comes in, all the way through the process to what goes into the cask at the end of the day. And it's part of the romance of craft distilling."

So, what do Scotch producers make of this London potential upstart?

Campbell Evans is with the Scotch Whisky Association, which represents nearly all of Scotland's distilleries. He says they're not quaking in their boots just yet.

"We've competed with whiskeys made all over the world very successfully. Scotch Whisky is by far the biggest internationally traded spirit. We welcome that competition, we're delighted that people are talking about Scotch Whisky and I look forward to finding out how London whiskey develops in the years ahead."

Back at Testbed One, they still have to clear through some bureaucracy before they can start production, but the team is hoping to bring Matilda to life in the autumn, producing around 60 casks of whiskey a year.

"It's gonna be an incredible moment to actually have London's first whiskey for over 110 years and to be the only people in London able to do that as well", says Rook. "I think our first cask we'll plan to lay down for quite a while".

If they can get things moving, the London Distillery Company's whiskey–still without a name–will be available in 2016. For those who can't wait, Dodd's Gin is on sale in the UK now and should be available on the East Coast this fall.