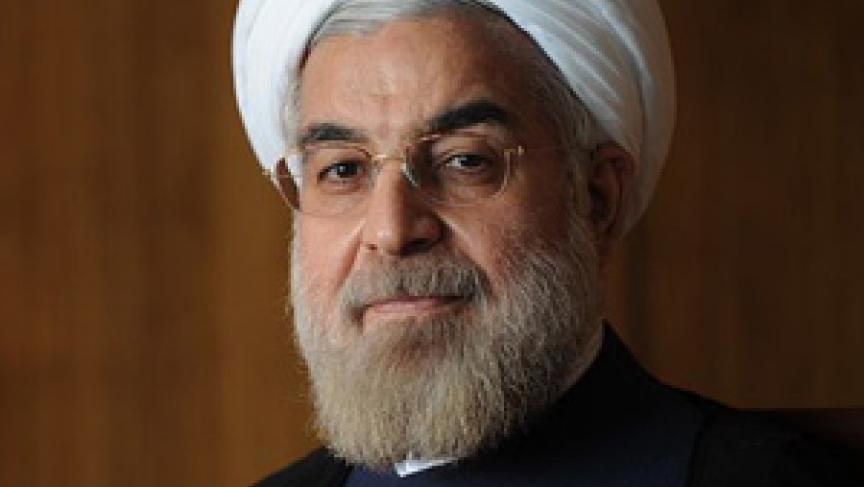 With Woodrow Wilson even the mustache disappeared.

It’s different in Iran: the state of a President’s facial hair can be of major political significance there, even today.

The new President Rouhani’s neatly groomed beard is seen as an indicator of his reformist credentials.

The BBC’s Rana Rahimpour is here to help us comb through the thickly matted politics of facial hair in Iran.

Marco Werman: Quickly now, last American president with a beard. That’d be Benjamin Harrison, 23rd president serving after Grover Cleveland in 1889. If the beard got him any popularity, it didn’t help. He lost to Cleveland, who served another term. Now, in Iran the state of a presidentâ€™s facial hair can be of major political significance. The new President Rouhaniâ€™s closely shaven look is seen as an indicator of his reformist credentials. Rana Rahimpour with the BBC’s Persian Service is here to help us comb through the thickly matted politics of facial hair in Iran. Sorry about all those metaphors there. Can you tell us what President Rouhani’s beard looks like, Rana, and how the voters reacted to it?

Rana Rahimpour: Mr. Rouhani’s beard is a typical clerical beard. It’s a bit long and it’s trimmed. It’s of course longer than President Khatami’s beard, which was shorter and he trimmed it a bit more, which probably means he was more of a reformist. But let me go through different types of beards in Iran. It might be very difficult for non-Iranians to see the difference, but if you grow up in Iran you realize that there’s a difference. We have intelligence officer’s type of beard, which is a not freshly shaved beard, so they leave it for two or three days. They shave it on Thursday or Wednesday, so by the time they go to work there is a bit of a beard. It’s a bit green but it’s not a full beard.

Werman: And is there a significance to shaving on Wednesday or Thursday?

Rahimpour: Yes, they, because among people who work for government organizations it’s better not to have a freshly shaved face.

Rahimpour: But then we have basiji or militia type of beard, which is a bit longer than the intelligence officer. Sorry if it’s too complicated.

Rahimpour: It’s about two or three weeks old beard, which is quite similar to what President Ahmadinejad had. SO it’s not long, and it’s not trimmed. Certainly not trimmed, because you’re not supposed to look after your appearance as such.

Werman: Right, so you’re talking intelligence officers, basiji beards. What about just the average Iranian man as you see him walking down the street. Can you tell anything about his politics by the kind of beard he wears?

Rahimpour: Yes, generally you wouldn’t see as many bearded men as you expect. So many people still shave, even those who work for the government, if they just have an office job, they do shave.

Werman: Say I’m a professional climber in Iran. Would I have problems getting a government job without some kind of facial hair?

Rahimpour: They prefer you not to shave. It’s just a sign of being religious. A part of the religion of Islam is for men not to shave, and if you really want to get a job in a government organization, you better leave your beard grow at least for a few days before having your first job interview.

Werman: I’ll take that into consideration. So you work and live in London, as I said, Rana. Do you see any of these cultural codes kind of coming over to London when it comes to facial hair? Like if an Iranian man ever gets to London, do they then immediately shave as a sort of political message?

Rahimpour: Not immediately, but among my colleagues I can’t name anyone who has a beard, and when they do decide not to shave, others usually joke about it and they say, oh, are you now working for the Iranian government.

Rahimpour: Yes. So we do joke about it, and say, is the Iranian government giving you any vouchers, or is there a reason, a political reason why you haven’t shaved.

Werman: Right, the right to kiss your man’s cheek.

Werman: Well, we’ve gone from facial hair to facial manscaping now. Rana, and what about your personal preferences? Beard or no beard?

Rahimpour: Well, it really depends on the face of the person.

Rahimpour: It suits some people and it doesn’t suit some others. It definitely suits George Clooney.

Werman: What about President Rouhani?

Werman: Very good, Rana. We’ll leave it there. Rana Rahimpour with the BBC’s Persian Service. Thanks very much.

Rahimpour: Thank you so much.