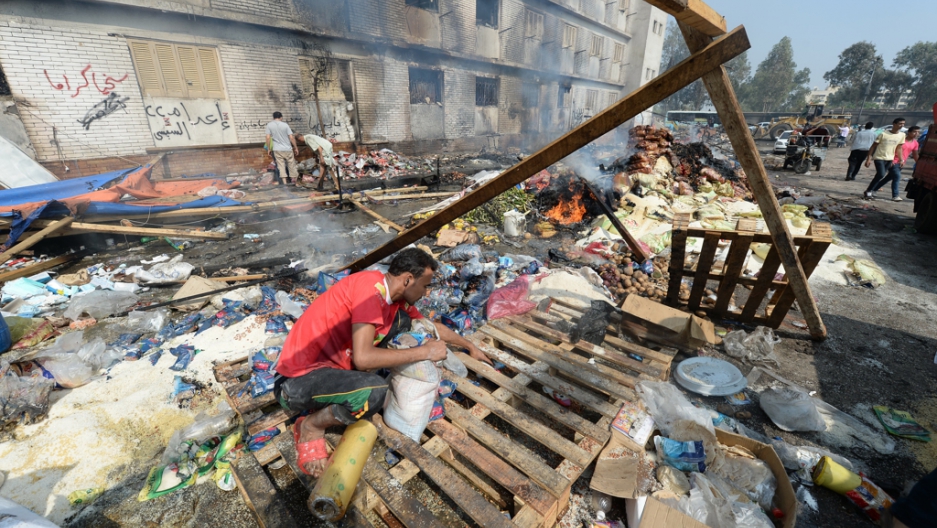 BEIRUT, Lebanon — Already in crisis, Egypt’s economy has been further damaged by a stunning intensification of violence as the country’s military-backed government moves to crush a protest movement to reinstate ousted President Mohamed Morsi.

Major multinational companies, banks and the stock exchange shut down this week. Western governments are advising their citizens to stay away.

General Motors, Toyota, Royal Dutch Shell and Electrolux are among the businesses that have stopped operations in the country, the firms announced Thursday. Many more multinationals said they are experiencing disruptions, including security lockdowns and shorter hours.

The UK-based Thomas Cook travel agency cancelled all its bookings for trips from Germany to Egypt Friday, after German’s foreign ministry issued a fresh advisory for its citizens to halt all travel to the country.

Shock at the brutality in which police and military forces are crushing a protest movement to reinstate ousted President Mohamed Morsi, and in which more than 600 Egyptians have been killed since Wednesday, hurt the markets.

The cost to insure the country's debt against default rose to the highest level since July 4, while yields on Egypt’s benchmark bonds rose to a five week high. The stock exchange fell 1.7 percent before its closure and analysts expect further sell-offs when the stock market reopens. It is currently scheduled to reopen on Sunday.

But heavy clashes between pro-Morsi demonstrators, security forces and armed civilians today, witnesses say. At least 17 people have already been killed and further unrest is being reported through the country.

The few foreign investors left are moving to withdrawal but currency controls are making it difficult to convert Egyptian pounds to dollars.

“I’d say it was $200 million to $300 million [in foreign holdings] waiting to come out Egypt a couple of weeks back, but this could easily be half a billion now that the lethal force against the Muslim Brotherhood has been sanctioned,” said Emad Mostaque, a strategist at Noah Capital Markets in London.

Right now, the country is spending its foreign currency at a rate of $1.5 billion a month, and already struggles to pay for more than $4 billion in monthly imports. As the value of Egypt's pound has fallen, pressure on the currency has grown as imports become more costly and public demand grows.

In July, foreign currency reserves stood at about $18.8 billion, or half of what they were in December 2010.

The question for many international donors now is how long the billions of dollars of support from the Gulf will support Egypt, according to a European diplomat in the country but who did not want to be named because he is not authorized to speak to the media.

None of these Gulf nations had maintained good relations with the Muslim Brotherhood movement from which Morsi hails.

“Unless corrective measures on the fiscal situation are taken and additional budget support comes forward, we will find the economy in an even more precarious state,” the European diplomat said.

But there are doubts that the Gulf will keep funding Egypt’s ballooning deficit, and the carnage has prompted some donors to cut funding.

Denmark this week announced it is suspending aid that goes through Egyptian government institutions, citing the “bloody events and the very regrettable turn the development of democracy has taken.” Germany has halted 25 million euros in funds for environmental and climate projects.

But later in the day, the EU's top diplomat Catherine Ashton said she had asked the 28-nation bloc to debate and coordinate "appropriate measures" in response to escalating violence in Egypt, AFP reported.

Lenders are instead looking to the US, and whether it decides to cut the $1.3 billion in military aid to Egypt, said Raza Agha, chief economist at VTB Capital Economics, a Moscow-based investment business with offices in the region.

“For multilateral agencies [such as the International Monetary Fund], the stance of the US will be key, as it retains the largest voting power at these institutions,” Agha said. But “if the US cuts aid, it will only facilitate similar actions by multilateral lending agencies,” he said.

But as the turmoil intensified Friday, more resignations — following the departure of former vice president and Nobel laureate Mohamed ElBaradei, who stepped down after Wednesday’s initial crackdown — grew more likely.

Tourism revenues, one of Egypt’s major foreign currency earners prior to the 2011 uprising that marked the beginning of the economic downturn, will also be hit. The World Tourism Organization says that 3 years ago, Egypt's $13 billion tourism industry accounted for 11 percent of the GDP.

Revenues had made a modest recovery in the last few months prior to the coup as the political situation eased. The first three-quarters of the fiscal year saw a rise in tourism revenue—up 14 percent from the previous year.

But all that is likely to be reversed.

Farah Halime is a business journalist and runs the blog Rebel Economy, which focuses on Middle East economies after the Arab Spring.