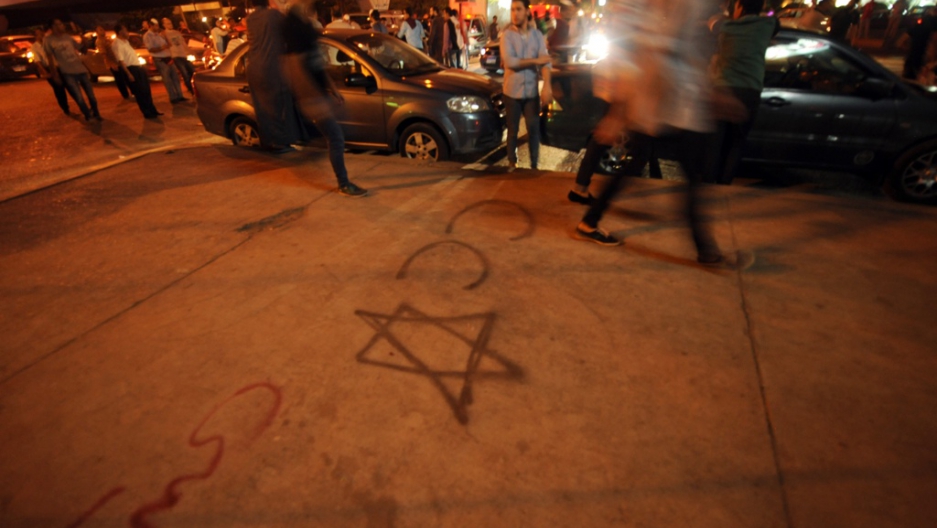 Egyptian supporters of the deposed president Mohamed Morsi walk past an anti-Israel slogan on the ground during a demonstration against the government in Cairo on July 31, 2013.
Credit: Fayez Nureldine
Share

JERUSALEM— The Israeli government maintained a vigilant, some say shocked, silence as news of the massacre in Cairo trickled in on Wednesday and Thursday.

Israel does not usually comment on internal developments in neighboring nations.

A senior Israeli official speaking with GlobalPost on the condition of anonymity, however, said silence is Israel’s best strategy.

"In Egypt as in other Arab countries, the rival parties accuse each other of colluding with Israel because collaboration with Zionists remains the classic mark of shame that Arabs use against each other to this day. We have witnessed this in Libya, Tunisia, Syria and, of course, Egypt,” the official said. “Now, if there is one thing Israel does not want to do, it is to interfere. We are in no position to tell anyone there what to do and quite humbly we should know our place. Any public statements can and will be used against us in the court of public opinion in Egypt. So the only option we have is to refrain from making any statement."

Israeli Prime Minister Benjamin Netanyahu's spokesperson, Mark Regev, put it more simply: "That is our decision. We often don't comment on internal events in other countries."

However, Israeli observers and pundits are actively analyzing the potential implications for their own country of the violence that is tearing Egypt apart. The military and supporters of ousted Egyptian President Mohamed Morsi, a leader of the Muslim Brotherhood, continue to battle right on Israel's southern border.

After several months of relative quiet following the end of Israel's military action in Gaza at the end of last year, in the past week Israel has faced growing threats and rocket fire from the Sinai desert — the huge land mass that is a buffer between Egypt and Israel — and from the Gaza strip, where the extremist Islamic group Hamas rules.

Some analysts fear that growing anarchy in Egypt, and in particular in the Sinai, which borders Gaza, could cause such instability as to virtually nullify the effects of the peace treaty signed by Israel and Egypt in 1979.

But other military experts see the possibility that the Egyptian army's current clampdown may, on the contrary, succeed in imposing order on the volatile region. Speaking on Israel Army Radio, the former deputy head of the Israeli security services, Israel Hasson, who is now a lawmaker, said he believed the Egyptian army "is absolutely determined to completely shatter the organization known as the Muslim Brotherhood."

The Brotherhood, founded in Egypt in 1928, was banned and repressed for all of Egypt's modern history. It first participated in elections only last year, when Morsi was elected. Egypt's powerful military, seeing itself as the guardian of the integrity of the Egyptian state, has always been antagonistic to the Brotherhood and under various regimes kept its leaders jailed for most of the past 50 years.

Asked how the situation may affect the region, Hasson said, "It's very simple. Egypt will not permit the existence of an armed branch of the Muslim Brotherhood with 20,000 men carrying weapons to operate on its northern border."

Regarding Hamas, which many view as a subsidiary of the Brotherhood, Hasson added, "And that means that Hamas is also on borrowed time."

"While Morsi was in power, the order was to not attack Israel. But since he was removed, the Muslim Brotherhood has reversed the order," said Maj. Eli Avidar, of the Israeli army intelligence reserves, referring to the Egyptian president who was overthrown on July 3.

Avidar said he believed the Brotherhood’s principal interest is to drag Israel into military engagement in the Sinai Peninsula, turning the conflict from a war among Egyptians to a war between Egypt and Israel.

“It is Israel's principal interest to avoid that,” he said. “Were Israel to attack in the Sinai, it would only benefit the Muslim Brotherhood."

"The former Israeli generals calling for us to hit hard in Sinai are idiots," he added. "For the first time, Israel is not an issue here."

Avidar said that instead Israel should cooperate more closely with the Egyptian military, and invest more in its intelligence capabilities and hardware.

From the other side of the border, an Egyptian analyst reporting from Cairo for Israel Army Radio, Munir Mahmoud, described Egypt as being in a “war of attrition” with the Muslim Brotherhood.

"The Muslim Brotherhood will not conquer the Egyptian people, or the army or the police," he said, asking that, "Israelis, and the world, understand us and not believe the Brotherhood propaganda."

Mahmoud said he hoped the consciousness of the Egyptian people will eventually stop the violence. “They know the Brotherhood's true colors," he said, describing the looting and ravaging of government offices by Brotherhood activists in his central neighborhood.

Despite the heartbreaking images emerging from Cairo, Avidar said, "this is far from a collapse of the army's coalition. We are nowhere near that."