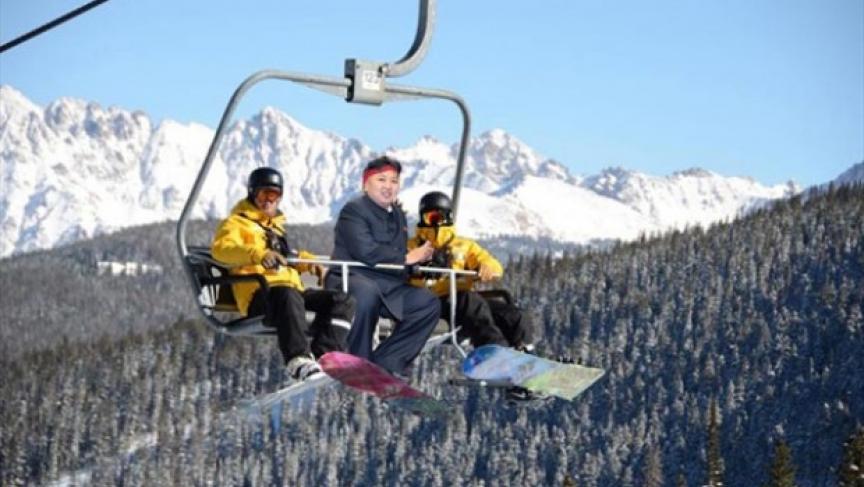 The mountains of Kangwon Province in North Korea get heavy snowfall during the winter months. All the snow may have inspired North Korean leader Kim Jong-un to build a ski resort there.

And THERE is our Geo Quiz: Where is North Korea planning its first "world class" ski resort? Would you go?

The North Korean leader himself might someday pay a visit to the groomed slopes. South Korea based reporter Jason Strothers say Kim may have got hooked on skiing when he studied abroad in Switzerland: "As one of the most elite North Koreans, he would have had the money and ability to go skiing so it is possible he had some experience while living in Europe."

So can you name the ski resort North Korea hopes to have ready by the end of the year?

It's named after a mountain pass in Kangwan Province.

"Why would I go skiing in N. Korea? I don't want to support Kim Jong Un's regime." Marnen in Albany, NY

"Totally. Nothing like skiing under the watchful eye of the Supreme Leader. I hear they have top notch health care over there too." Michael in Provo, UT

"Trick question. There is no good skiing in NK. And no, I would not go, based on the real fear that if I did, I wouldn't come back." Jack in Lambs Grove, MA

"Yes I would go, but not to ski, just to see it and hang out in my cool ski gear!" Faith in Boston, MA

"Best place to ski is the Bay of Nampho. I'm from (Florida) we water ski, silly! Yes I would definitely go." Eric in Pensacola, FL

"No, no skiing in a country with horrific human rights abuses. Why reward a cruel dictatorship with my hard-earned money?" Elizabeth in Modesto, CA

As it turns out, North Korea is moving forward with its plan to build a "world class" ski resort at Masikryeong in Kangwon Province.

But the plan has hit a snag as heavy summer rains have wreaked havoc with construction sites. A Seoul-based news website, Daily NK, says "the plan to develop a world-class ski resort at Masikryeong in North Korea's east has run into major problems, with heavy rains causing landslides and the collapse of part of the building site."