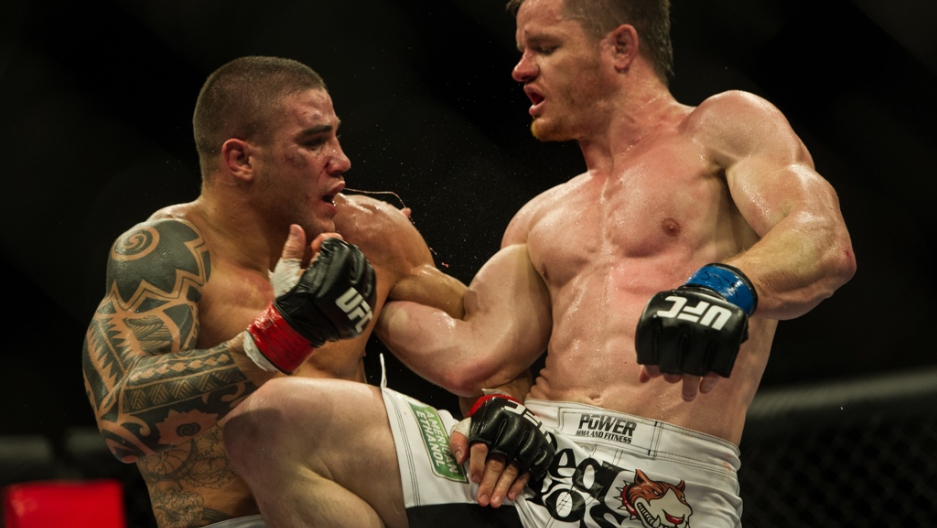 RIO DE JANEIRO, Brazil — The roundhouse kicks reverberate around the gym like artillery shells exploding down the block.

For 30 minutes, the fighter glides across the ring, flicking out rat-a-tat-tat combinations of seamless jabs, straight rights and those brutal kicks, crashing his lower shins into the pads held head-high by his trainer.

Just a couple miles away, locals and tourists are sunning themselves at Copacabana beach. But here in Rio’s Flamengo district, at the Nova Uniao team’s training center, the name of the game is unarmed, full-contact, hand-to-hand violence.

Brazil might be the nation of samba, string bikinis and caipirinha cocktails, but it’s also the epicenter of the world’s fastest growing sport: mixed martial arts (MMA), or “cagefighting.”

And right now no gym on the planet is better at producing champions than Nova Uniao. It’s home to Jose Aldo and Renan Barao, the featherweight and interim bantamweight champions, respectively, of the Ultimate Fighting Championship (UFC), the world’s premier MMA franchise.

Then there's the fighter I'm watching work up a sweat in the ring, Eduardo Dantas, the current 135-pound champion of Bellator, the No. 2 MMA tournament.

His power and technique are just plain scary. Watching him and his Nova Uniao teammates work out, it comes as no surprise that roughly one in five of the hundreds of fighters on the UFC roster is Brazilian.

Only US collegiate wrestling rivals the South American country’s hardscrabble favelas, or slums, as production lines for world-class MMA competitors.

But a gulf of money, opportunity and class separate the two.

“Americans fight because they choose to be fighters. Brazilians fight because they have no choice. We fall in love with the sport but we start fighting for the money,” says Nova Uniao’s Claudia Gadelha, 24, a top contender in Invicta, the leading competition in the rapidly evolving world of female MMA.

Yet grinding poverty alone doesn’t explain Brazil’s ultimate fighting success. After all, there are plenty of other corners of the world awash with desperate want and senseless violence.

Decades before the first UFC tournament was staged in 1993, crazy Brazilians were duking it out in “vale tudo,” or “anything goes” contests.

“Brazil is where it all begins,” says Dennis Asche, a former MMA pro from California who has settled here. He’s the founder of Connection Rio, a travel agency for foreigners, both pros and enthusiasts, looking to improve their combat skills at the city’s numerous elite martial arts academies. “Brazilians had a huge jump on the rest of us.”

Despite the name, vale tudo, first documented in the 1920s, does have rules — biting and eye gouging are not permitted — but not many. Throughout its history, two disciplines have dominated vale tudo: Brazilian jiujitsu (BJJ) and luta livre.

Jujitsu is all about the "submission." A highly technical form of anatomical chess, it uses a myriad of complex chokes and limb locks to incapacitate — or "submit" — opponents.

Jiujitsu practitioners struggle for a hold. Courtesy of Connection Rio.

The South American variant of the ancient Japanese art famously allows practitioners to win fights against physically dominant opponents — in other words, while their adversary is lying on top of them pounding them into oblivion — through highly technical moves that take years to learn. While earning a black belt in karate, judo or taekwondo may take a committed practitioner as little as three or four years, in jiujitsu it usually takes a decade.

BJJ exploded onto the world stage when Royce Gracie, scion of the legendary Brazilian clan that developed the discipline, won three of the first four UFCs, routinely taking on fighters who weighed as much as 70 pounds more than him.

Luta livre is Brazilian submission wrestling. Although many moves are similar to BJJ, it’s regarded as more athletic and less technical.

Andre Pederneiras, the fifth-degree BJJ black belt who runs Nova Uniao, tells me that the first thing he looks for in wannabe fighters is a strong ground-game.

“A great kickboxer or boxer will need a long time to learn submissions,” he says. “A jiujitsu black belt can learn basic striking much more quickly, and become a complete fighter.”

Pederneiras, who permits no drinking or partying among his proteges — other than right after a victory — then adds that a fighter has to have “heart,” that intangible competitive drive that can manifest in many ways, including a through-the-roof pain threshold that allows a combatant to fight back from hellish beatings.

I will learn this lesson the hard way.

The following week, I'm watching the Nova Uniao pros go through their paces in muay thai — the full-contact martial art from Thailand that combines Western boxing with kicks, elbows and knees.

As they crash set combinations into each other, I felt frustration at missing out on a once-in-a-lifetime opportunity to train with them. And relief.

I dabble in muay thai and was supposed to have joined in the class — until I tore an intercostal muscle in my first ever BJJ class a couple of days earlier, while attempting to scramble out of an arm-bar. The pain comes and goes, but at its most intense feels like I am being stabbed in the ribs, and my movement is seriously impaired.

A couple of gentle finger-pokes is all it would take to TKO me.

Yet, incredibly, several fighters tell me they would train through the injury, at least if they had a big payday coming up. “Your family has to eat,” one of them says matter-of-factly.

Although Nova Uniao’s home to several household names plus one global megastar, Aldo, most of its team members earn a modest income and still live in the favelas where they grew up.

They rely on a small stipend, usually around 800 Brazilian reais ($400) a month from the gym. Anything they earn on top of that either comes from their fight purses or sponsorship.

In return, the team gets a cut, typically 10 percent, of the purse, and is able to attract paying customers — amateur weekend warriors like me — who sign up for jiujitsu or other combat classes.

That business model now functions at fight gyms from Long Beach to Helsinki. Yet many still view MMA as a barbaric throwback to the dark ages. In some places, notably the state of New York, MMA events are even banned.

“It is stupid. We are stereotyped by people who know nothing about us, or how technical this sport is,” says Gadelha, who is studying for a law degree in her spare time.

“They don’t know about our discipline, or that we have a philosophy, or that we train three or four times a day. We are not aggressive outside the gym.”

She’s not kidding about the fighters’ dedication.

As Dantas continues to warm up, the room slowly fills with more athletes, burly, tattooed modern-day gladiators with lean, chiseled features and more than the odd cauliflower ear. Many faces are familiar to me from the long hours I've frittered away watching UFC undercards.

They josh among themselves as they stretch and wrap their hands ahead of the marathon sparring session.

Nova Uniao is famous as a small fighter’s gym, with most of its members competing at lightweight, 155 pounds, or welterweight, 170 pounds. But several of these men are huge, and appear more like light-heavyweights.

One Danilo Pereira — his nickname Moto Serra, or “chainsaw,” tattooed across his back — tells me he weighs 215 pounds but will fight at the 180-pound middleweight limit in five weeks.

The last 8 or 10 pounds of that will be sweated off in the gym or sauna in the final 24 hours before the weigh-in. But the rest will be worked off the hard way, through extra sparring sessions and by whittling food down to the bare minimum.

Yet there’s no fat that I can see on Pereira, whose physique is reminiscent of a young Mike Tyson. He looks like he could run through a brick wall.

After some brief stretching, the sparring begins. Like in most real MMA bouts, the fighters start cautiously, feeling out their opponents, searching for openings, and testing their range and timing.

But the intensity quickly ramps up.

Soon I am surrounded by 50 of the world’s hardest men — and three of its hardest women — taking turns to go at it tooth and nail.

Once on the ground, the combatants wrestle for control of each other’s limbs, using chokes, arm-locks or leg-locks, combining the precision of an orthopedic surgeon with the crushing power of a boa constrictor.

At the other end of the gym, Gadelha is mixing it up with some of the male strawweights and featherweights.

One fighter is knocked out in the ring just a couple of feet behind me — a common occurrence here, apparently. His teammates apply an icepack to the back of his neck as the sparring continues.

Meanwhile, with a quiet, unassuming presence, Aldo — his UFC belt apparently forgotten at the door — joins in the sparring as though he were just another kid hungry for his first win.

More than most sports, outsize egos tend to land hard in MMA.

And if there were any doubt about the depth of talent at Nova Uniao, it’s quickly dispelled as Aldo, one of the best pound-for-pound fighters in the world, is tested by each of his training partners, with more than one backing him up against the wall.

After the session, Pederneiras tells me what must be a truism for any sport: The only path to success is to simulate competition conditions in training.

At Nova Uniao, that means three-hour sparring sessions every Tuesday and Thursday. On top of that, there are grueling, daily classes in submission wrestling, BJJ, muay thai and fitness training.

Fighters either thrive or drop out.

One new team member who looks like he’s doing the former is Torryn Heffelfinger, 26, an ex-wrestling captain at Indiana's Manchester College and a Michigan Golden Gloves semifinalist, one of just a handful of foreigners accepted at Nova Uniao.

“I wouldn’t want to be behind a desk eight hours a day,” he tells me as he nurses a cut under his right eye. “This is never easy, but it is the only time I feel I am doing what I am meant to be doing.”

Gadelha adds: “The fight is never as bad [as the training]. In training, you get hurt, you see a lot of blood. You have to train two months to fight 15 minutes. That is what makes you ready to do anything inside the cage.”