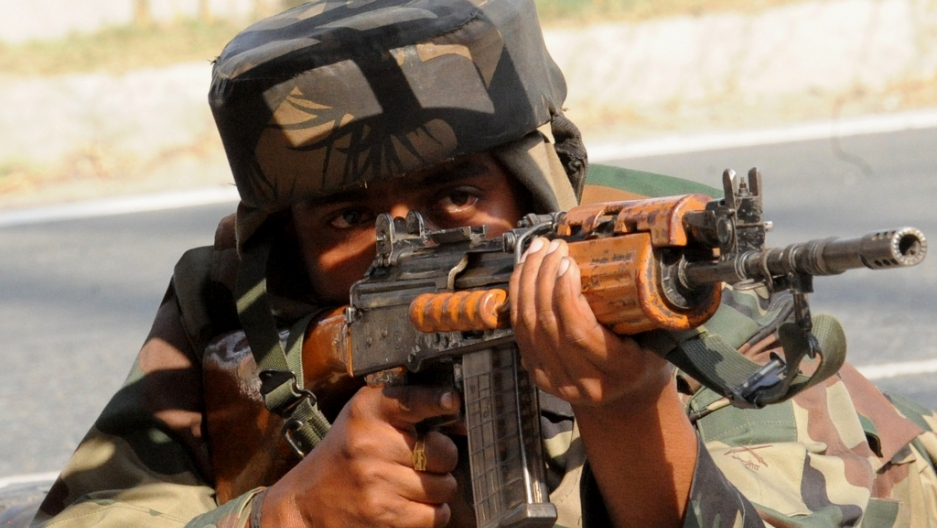 Violent border clashes between India and Pakistan in Kashmir are growing. Is it the sign of something larger?
Credit: Rouf Bhat
Share

But the real target of the violence may well be Pakistani Prime Minister Nawaz Sharif, as Pakistan's military and intelligence services try to thwart the newly elected leader's aspirations for peace with India.

“The intention here is to sabotage the peace process,” said Michael Kugelman, an expert on South Asia affiliated with the Woodrow Wilson Center.

“This is a sad reality of India-Pakistan relations — whenever things are looking up, a saboteur tries to send all progress up in smoke.”

The region has been on the boil since the five Indian soldiers were killed in an ambush in the Poonch sector of India-administered Kashmir last week. India said Pakistani soldiers were to blame, and Pakistan disavowed the attack.

More from GlobalPost: 7 graphs that prove America is overrated

The incident prompted a series of cross-border skirmishes that each country has accused the other of starting. It has all-but scuttled hopes that Sharif and his Indian counterpart, Manmohan Singh, will be able to resume peace negotiations anytime soon.

The so-called composite dialogue dates back to January 2004. It was called off following the November 2008 Mumbai terrorist attack, which India believes were perpetrated with the aid of Pakistan's Inter-Services Intelligence agency. Until this week, the formal talks had been set to resume this month. Now even an informal meeting between Singh and Sharif on the sidelines of the September UN General Assembly is at risk.

The situation is scary, experts say. Kashmir — a divided territory that both India and Pakistan claim as their own — was the cause of two of the three wars the two countries have fought since they attained independence from Britain in 1947. Now both New Delhi and Islamabad control numerous nukes; Pakistan has the world’s fastest growing arsenal.

As the tit-for-tat bombardment continues, the shelling already marks the heaviest exchange since the ceasefire began in 2003, raising fears that the repeated violations will result in a complete breakdown of the truce. Signaling their concern about further escalation, both Washington and the UN have appealed for calm.

But which side is responsible for starting the fire? What is the endgame? And how far will the flames spread before cooler heads prevail?

Indian analysts remain convinced that Pakistan uses such shelling to provide cover for jihadi militants crossing the border to attack installations in India-administered Kashmir. By India's tally, there have already been 42 such ceasefire violations in 2013, compared with 28 in 2012, according to India Today. Meanwhile, this year 40 members of India's security forces in the area have been killed, compared with 17 the year before.

For Indians looking to explain who broke the truce this time, that's a smoking gun.

“If you just take the common sensical point of view, India has no interest [in breaking the ceasefire], because we are not sending in infiltrators under cover of fire,” said former Indian foreign secretary Kanwal Sibal. “We have no reason to fire unilaterally because what do we then hope to achieve? We don't score any points either bilaterally or internationally.”

Pakistan-watchers, however, argue that its army no longer provides such support for jihadi groups, and hint that the ambush story may have been a ploy by India, or a local Indian commander, to trigger hostilities.

Admitting that Pakistani generals “may have” helped jihadis cross into India in the past, for instance, Pakistan-born Shuja Nawaz, director of the South Asia Center at the Atlantic Council, said that policy was ended under former president General Pervez Musharraf, and it would be “surprising if it is being activated again.”

Nawaz also questioned why India first called the alleged ambush an attack by “persons dressed in Pakistani uniforms” – only later referring to it as an army assault — and why top military officials allowed tempers to flare for two days before activating a hotline intended to defuse these situations.

“What is surprising is that the Director General Military Operations did not activate the hotline till two days [after the alleged ambush]. Why?” said Nawaz.

Experts agree it’s not likely that Sharif's civilian government officially sanctioned the alleged ambush of Indian soldiers. But it may well have had the active or tacit support of the military-intelligence combine, or “deep state,” that holds the real power in Pakistan. Moreover, though the ceasefire is expected to hold, the ambush and subsequent saber rattling in Pakistan certainly establishes that its new prime minister — for all his talk of peace — must overcome enormous obstacles in his own country before he can think of negotiating with India.

“Overarching all this is the fact that during the election campaign, [Sharif] spoke about his desire to improve relations with India, and there was an exchange of special envoys pretty quickly,” said India's Sibal.

“There was hope that he might be able to begin turning a new page. But under his watch all the wrong things are happening... Jihadi organizations [and] what they call the ‘deep state’ in Pakistan [i.e. the army and intelligence apparatus] seem to be at work.”

While Sharif has continued to preach peace since his June election, his army and spy agency don't seem to be listening. That's because both have vested interests in stoking fears of an Indian attack — lest they face a sustained drive to curtail their powers, or, worse, a deep cut to the defense budget.

Meanwhile, Islamabad allowed alleged terrorist Hafiz Saeed to lead Eid prayers before a massive throng at the Gaddafi stadium in Lahore on August 9. India and the US accuse him of leading of Lashkar-e-Taiba, and Indians accuse of masterminding the 2008 attacks on Mumbai; Washington DC has a $10 million bounty on his head. The Eid prayers were not a one-off. Saeed also led several thousand supporters in a Lahore parade on August 14, to mark Pakistan’s independence day.

And amidst the shelling this week, Pakistan's finance minister announced that a plan to grant India “most favored nation” status – once viewed an easily attained step that would be good for both countries – is now off the table.

“Neither side wants war nor does either profit from a conflict escalating beyond [Kashmir’s Line of Control]. Local commanders, especially newly posted ones to the region, flex their muscles. But this is a dangerous game,” said the Atlantic Council's Nawaz.

Worse still, the game is set to grow more perilous with the approach of 2014 – when the rules will change, according to the Woodrow Wilson Center's Kugelman. The US withdrawal from Afghanistan will leave India and Pakistan contending for influence there, while the exit of US troops will again make India and Kashmir the number one target for Pakistan-based terrorist groups like Lashkar-e-Taiba.

Meanwhile, in the face of continued provocations since the 2008 attacks on Mumbai, India's capacity for restraint may have reached its limits, Kugelman worries.  And the election slated for May 2014 will put added pressure on Singh's government to take a hard line.