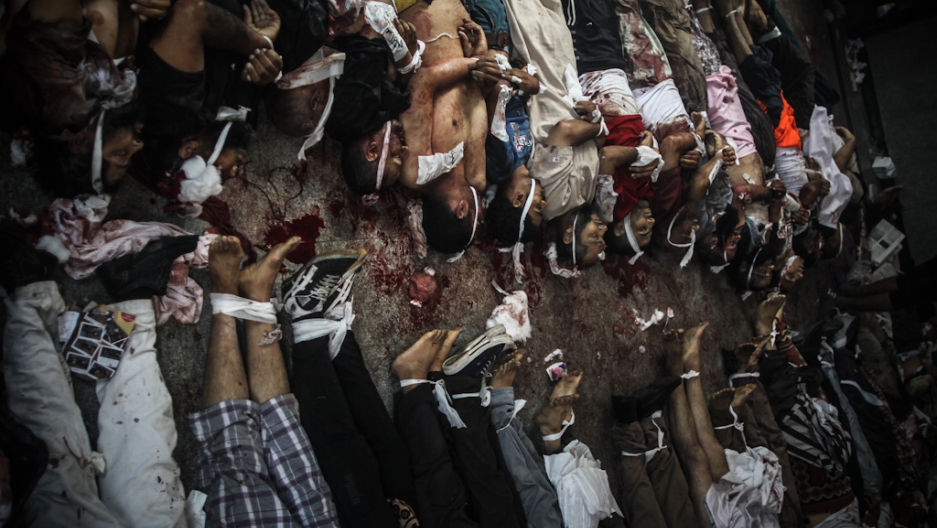 The bodies of pro-Morsi demonstrators are aligned on the floor of a makeshift morgue outside the Rabaa al-Adaweya mosque in Cairo, where supporters of the former president have staged a weeks-long sit-in. Security forces clamped down on the demonstration, and health officials say 149 people were killed in the ensuing violence.
Credit: Mosa'ab Elshamy
Share

CAIRO, Egypt — Egypt’s military-backed government imposed a month-long nighttime curfew in nearly half the country’s provinces Wednesday night, following a day of nationwide violence that was striking in its brutality and that marked one of the bloodiest episodes here in decades.

At least 700 people were killed across Egypt Wednesday after police — bolstered by armored bulldozers, helicopters and support from the country’s professional army — swooped in on two sit-ins in Cairo where thousands of supporters of deposed President Mohamed Morsi had been camped out for six weeks in protest of their leader’s ouster.

Morsi supporters responded by attacking and setting fire to roughly a dozen churches and Coptic Christian businesses. Deadly clashes broke out in several cities outside the capital, and an additional eight senior Muslim Brotherhood leaders were arrested.

US Secretary of State John Kerry called the violence “deplorable” in a statement he made from the State Department.

In Cairo, well-armed police commandoes surrounded the demonstrations and appeared to be shooting at protesters indiscriminately after sealing off rally exits at dawn Wednesday morning.

The makeshift field hospital at the larger sit-in outside Cairo’s Rabaa al-Adaweya mosque struggled to cope with the influx of the dead and wounded, stacking bodies in the mosque’s already cramped rooms.

The battles spilled over into the area’s side streets, where police also fired on journalists and spectators using birdshot, live ammunition and tear gas. Three journalists were killed in the violence, including Mick Deane of the UK-based Sky News channel, and countless others threatened, harassed or detained.

From the Rabaa encampment’s perimeter, a plume of black smoke could be seen billowing over the neighborhood and gunfire rang out constantly.

Security forces had blocked all passages out. And witnesses said even the alley from the protest to the field hospital was manned by snipers, who fired at demonstrators trying to access the wounded.

Anguished relatives of protesters trapped inside frantically tried to contact their loved ones. But mobile networks were jammed and most calls failed to connect.

"I left overnight so I could get some sleep," Mai Arafa, a young pharmacist said. She had spent the past week at the camp, which the Brotherhood movement had transformed into an informal city.

“I left my fiancé. He says he won’t leave,” Arafa said, her hands shaking as she tapped a plea for him to leave the protest into her iPhone. “I know I cannot desert him, and I will not desert this cause.”

Egypt’s military, backed by sweeping popular support, overthrew Morsi just days after the anniversary of his inauguration June 30. An Islamist and Brotherhood leader, Morsi was the country’s first elected and civilian president.

But he presided over a disastrous year in power, failing to boost the economy, rolling back civil and political rights and contributing to a rise in sectarianism in a country where the Coptic Christian minority already live in fear.

Widespread discontent with his rule culminated in massive street protests that paved the way for the army to take power. Morsi supporters settled into semi-permanent protest camps while the military intensified its own rhetoric against the Islamists, calling for the people to grant the army a “mandate” to fight terrorism.

The pro-Morsi protests were largely peaceful, but Amnesty International reported evidence of torture at the sit-ins and some demonstrators had weapons.

Standing on his balcony, an army colonel surveyed the chaos in the side streets outside Rabaa. His son had invited inside several reporters trapped on a sidestreet.

"This is necessary, it is the only way,” he said. At that point, the area looked like a war zone.

“They are terrorists and they have brought chaos with them,” he said. The interior ministry said 43 policemen were killed. “They say they are not armed, but they have guns."

The colonel’s son pointed to his father’s gun on the table nearby, vowing to fight the pro-Morsi demonstrators himself if they moved any closer to his home, which was just a few streets away from the battles.

Other local residents greeted the police move on Rabaa with cheers. A crowd gathered around the military cordon on one side-street, chanting, "the army and the people are one hand."

Inside Rabaa, it was pandemonium.

Hundreds of men, young and old, clambered atop the sandbag barricades built to stave off an attack, bearing their chests to military snipers stationed above and chanting, "we give our blood and our soul for Islam.”

When in the afternoon the makeshift morgues ran out of space, volunteer medical workers laid the bodies out in corridors and the mosque’s upper floors. The structure was also providing sanctuary to hundreds of terrified women and children.

Gesturing towards the field hospital, 44-year-old Ahmed Azazy said he had seen hundreds of injured protesters ferried toward the facility.

But by sundown, police forces had emptied the square, leaving hundreds dead and dismantling the charred protest tents to the light of the fires that still burned.

As the curfew took effect at 9pm, an eerie calm descended on Cairo, an otherwise vast energetic metropolis of 20 million people.

“They were striking at us like animals,” Azazy said.