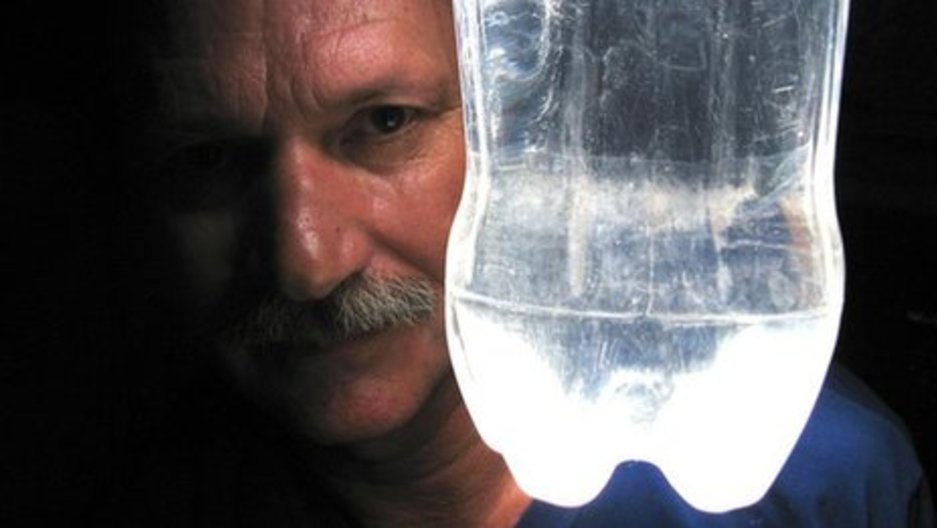 Think of a life-changing technology these days and the image that comes to mind might be an iPhone – something incredibly complex and sophisticated that expands your whole idea of what's possible. Okay, now keep that idea in mind, but instead of an iPhone, picture this: a clear plastic soda bottle, some water, and a teaspoon or two of bleach. Put them together and you get something that can be even more life-changing, for millions of people: a light, inside their homes. It's an incredibly simple idea. Cut a hole in your roof, stick one of those bottles through it, secure it with some sealant and you've got something roughly equivalent to a 60-watt light bulb. The idea was developed roughly a decade ago, but in the last few years it's taken off around the developing world. "Starting out in 2011 with one bottle and one beneficiary, right now we're 140,000 homes in the Philippines," Philippine social entrepreneur Illac Diaz told the BBC. Diaz builds low-cost houses using materials like bamboo, old tires and plastic bottles. Often the places he works have limited access to electricity and a cheap light can make a huge difference in people's lives, even if it's only available during the day. Each bottle-light works by refracting sunlight through the water and bringing it into the house. The bleach keeps the water clear by killing any algae. Alfredo Moser thought it up. He's a Brazilian mechanic who got the idea when a friend suggested he make a lens out of a bottle of water to start a fire during a blackout. The idea of capturing sunlight in a bottle stayed in his head. "The only places that had power were the industry, not people's houses, Moser says. "So people started to adopt this idea of the Moser bottle lamp… It's a divine light. God gave the sun to everyone." Moser never tried to make any money off his idea, and he never dreamed it would spread around the world. But Illac Diaz says he's already helped bring the bottle-light to roughly 360,000 homes in 15 countries and expects it to reach nearly a million people by the end of this year. Talk about catching "lightning in a bottle."