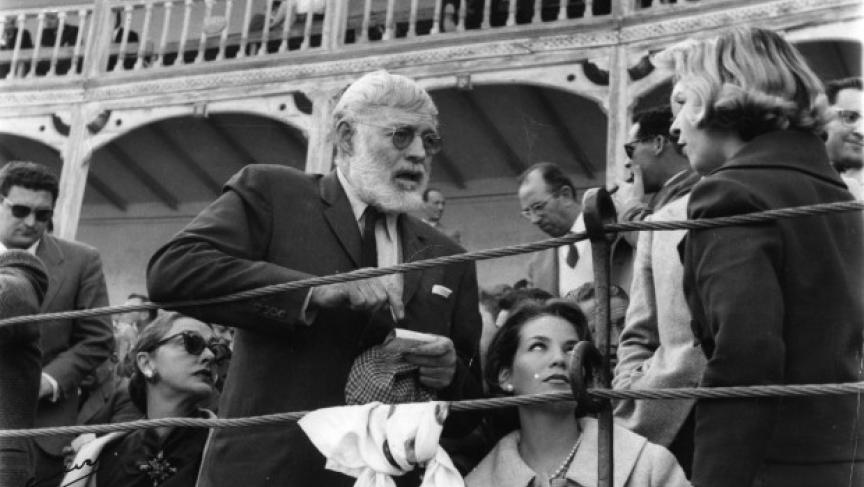 Ernest Hemingway signing an autograph at a bullfight in Aranjuez, Spain

There's this guy, Ernest Hemingway. I'm sure you've heard of him. He's famous. He fought in the Great War. He wrote about it. He partied in France. He wrote about it. He went to Cuba, met fishermen, and wrote about them, too. He changed American literature. One short sentence at a time. Sadness enveloped his final years. He lost his mind, and with it, his literary skill. But in 1959, just a few years before he shot himself in Idaho, he had the last, best summer of his life.

I know this because of archival librarian Megh Testerman who found herself in a new place with time on her hands. She reached out to the John F. Kennedy Library in Boston. She knew it housed the Hemingway Collection. (Itself a great story you should read.)

The JFK library said it had some work that needed doing. The work, as Testerman would soon discover, would be challenging. The JFK Library asked her to try and catalogue photographs of Ernest Hemingway from 1953 all the way to the summer he spent in Spain in 1959–known as "The Dangerous Summer."

Testerman was thrilled for the opportunity, but soon entered the challenge: How do you identify random people are seen partying with Hemingway in black and white photos from the 1950s? Afterall, there weren't Facebook tags back then. So, she formed a plan of sorts, a brilliant plan in retrospect, a plan that would take her right alongside Hemingway as he traveled across Spain. And it was a plan that would ultimately succeed in identifying most every person in the photographs, filling in important parts of Hemingway's history.

Sleuthing 101. Testerman says her first day was completely overwhelming. She walked into a temperature controlled room in the JFK Library. Inside the room were gray archive boxes. Inside the boxes were folders. And inside the folders were photos. Thousands of photos. The materials were basically organized chronologically and thematically.

"The photos are fantastic," she says. "I wanted to sit down and look at everything from beginning to end."

Hemingway appeared in picture after picture. His white beard contrasting with black hair of the bull fighters. But, who were these other faces? What were they doing with him?

Testerman started by reading biographies of Hemingway. The summer of 1959 is thankfully, a well documented summer. In fact, Hemingway even wrote an article about the summer for Life Magazine called, "A Dangerous Summer."

Hemingway also took hand written notes. They could be used for dates and places and people. She also studied the places Hemingway frequented for clues on the people who surrounded him.

"I can now identify bull rings in Spain by the structure and know if the ring is in Valencia or Madrid," she says. "Sometimes, I'd even look for the breed of the bull."

But that would only give her a location of the photo, not the date.

She searched through an old Spanish newspaper for "the cartel" or an advertisement that is basically a fight card, detailing the matadors fighting and the bulls they are scheduled to battle.

After several weeks, the cataloging process was going well. She had followed Hemingway as he drove his old pink Ford across Spain.

But then came the case of the American tourists. She says Hemingway had gone to Pamplona for the running of the bulls. It was in Pamplona where Hemingway, along famed bull fighter Antonio Ordonez, met a pretty young American girl. The girl introduced them to her roommate and a month later, they appeared at his birthday bash.

For Testerman, they were just two random girls in a photo. She went back to look at various biographies, looking for any mention of the girls.

Remember, this is the JFK Library, the authority on Hemingway. She had to be beyond sure the captions were correct.

So she went through a original copy of Life Magazine published in 1960 that featured, "A Dangerous Summer." And in that version was a picture of Hemingway in a swimming pool alongside a girl. The caption below read: Teddy Jo Paulson.

Later, she made a positive ID of Schoonmaker, too.

Truth be told, her plan wasn't really a plan. It's just one part of what archival librarian do. In this case, mending the breaks in historical record. Testerman says the project culminated in two distinct moments.

A hard charging college kid would have a hard time keeping pace with Hemingway on his birthday. The party started early in the day with swimming and went right on through to the next day. There were donkey rides, flamenco dancers, bull fighters, photographers, fireworks, a fire, firemen, and a famous moment captured in time of Hemingway shooting a lit cigarette off the lips of a bull fighter with a gun. It's a gem of a photo–one where any attempt at description would simply diminish its brilliance.

Legend has it that Hemingway used a .22 to perform the miracle. But Testerman debunked it. She says you need to look carefully at the weapon.

"The way the breach works, it folds in half. Some may have mistook it for a .22 but it's an air rifle."

2. The Land of Color

Testerman really wanted to catalogue every photo from 1953-1959. She wanted to finish the bull fighting series. Her last project had her catalogue Kodachrome color transparencies.

During her archival work, all the photos she'd been working with had been in black and white. All his adventures, the bull fighting, the parties, the American tourists, all lived in whites and grays and blacks.

The transparencies told a different story.

"They blew my mind," she says. "I didn't realize how colorful bull fighting was during all those fights in the summer. The bull fighters wore the most amazing outfits of lime green and egg plant, delicate pinks and bright pinks and gold, and you could see how bright and hot and how tan they all are."

She catalogued every transparency. And that was it. The end of the dangerous summer.

Testerman says archival work is bittersweet. You know how the story ends for each of the people in the photos. For Hemingway, the photos give almost zero indication of his ultimate fate. Testerman, though, puts it in perspective.

"That summer is such a fascinating summer. He drove around Spain in a pink ford and went to bull fights and partied with pretty young girls, his wife and his matador friends and that's what is cool about it. It was a good summer. The last, best summer of his life."