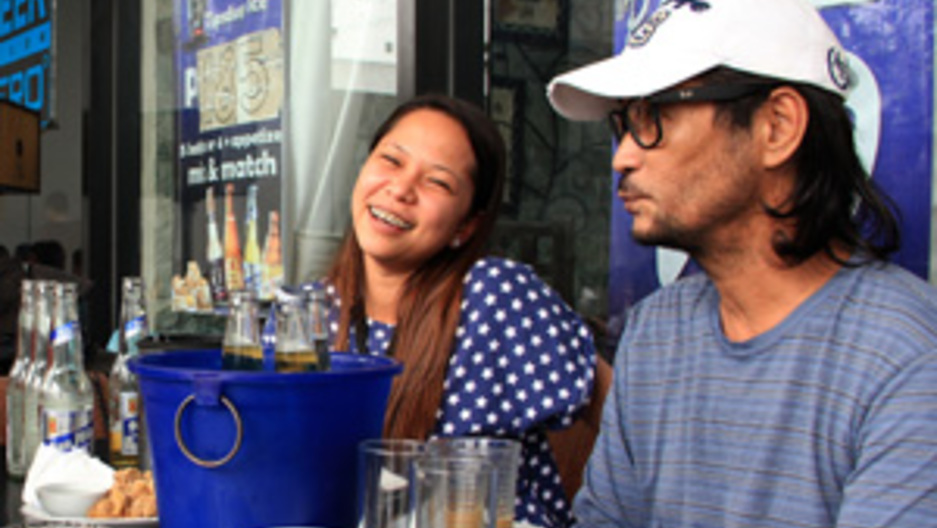 Call center workers have drinks after finishing up work. (Photo by Aurora Almendral.)

Halfway across the world, more than a half-million people live on American time. The Philippines is home to the largest call center industry in the world, and to man the phones during American business hours, many Filipinos adjust their lives to a global schedule.

When it's 6 p.m. on the East Coast, it's 6 a.m. in Manila. And for call center workers, it's time to get off work. Despite the morning sun, a lot of them head to 24-hour bars to unwind with a few drinks.

"Once you're a call center agent, your life turns 180 degrees," says Rene Reinoso. "First of all, you do not anymore like the rest of us. Or rather, the rest of them, [those] who wake up in the morning and sleep at night."

Reinoso sits with a few co-workers at an outdoor bar in the business park where they work. On the street, it's morning rush hour, and normal office workers are hurrying to their jobs. But Reinoso and his friends are at the bar, smoking cigarettes and stubbing them out in empty bottles of beer.

"Normal workers of the Philippines would enjoy the holidays. We have a lot of holidays in the Philippines. But for us, call center agents, we only enjoy US holidays, like July 4th, Labor Day, Memorial Day, and Christmas," says Reinoso.

And they're on American weather too. When a disaster hits, like flooding in New York and New Jersey, their company has all hands on deck to answer customer calls.

But when there's a typhoon and Manila is flooded, it's business as usual–in America.

In some ways, they're living in a different culture too. Call center workers can't have normal lives at a normal time, and their days off don't always fall on weekends. So it's hard to go to birthday parties, family dinners or get-togethers with college buddies. They mostly socialize with other call center workers.

It's isolating. But in a conservative Catholic country like the Philippines, it can also be liberating. The call center industry has a reputation for permissiveness. Besides all the drinking and smoking, Rene says some workers take advantage of employer-provided napping rooms to do more than just nap.

"There are a lot of incidents where they get caught in the sleeping quarters," he says. "It's part of the culture now. We call it the call center culture. It's part of it."

Ryan says that's not a bad thing. Most poor Filipinos don't have access to the internet. For call center workers, just being able to afford it, is one of the great things about the job. Working on American time gives them an entry into an American-style middle class life.

Minimum wage for office workers in the Philippines is about 10000 pesos a month. But the starting salaries for call center agents are around 18,000 pesos, about $400, with room to move up. It's enough for them to buy the beers and Starbucks lattes they drink every day, plus nice clothes and updated cell phones.

For Castro, the money and the lifestyle are the tradeoffs for the crazy hours, the occasional boredom, and the havoc on his family life,

"But I guess I'm lucky," he says. "It's important that I have work and I'm doing well with work, so it's a sacrifice that's OK to make."

By 11 a.m., Castro and his friends have gone through three buckets of beer. Castro had to leave to take his son to a doctor's appointment. The rest of them look bleary-eyed. It's almost lunchtime in the Philippines, but they'll be staggering home to bed–like office workers in New York.