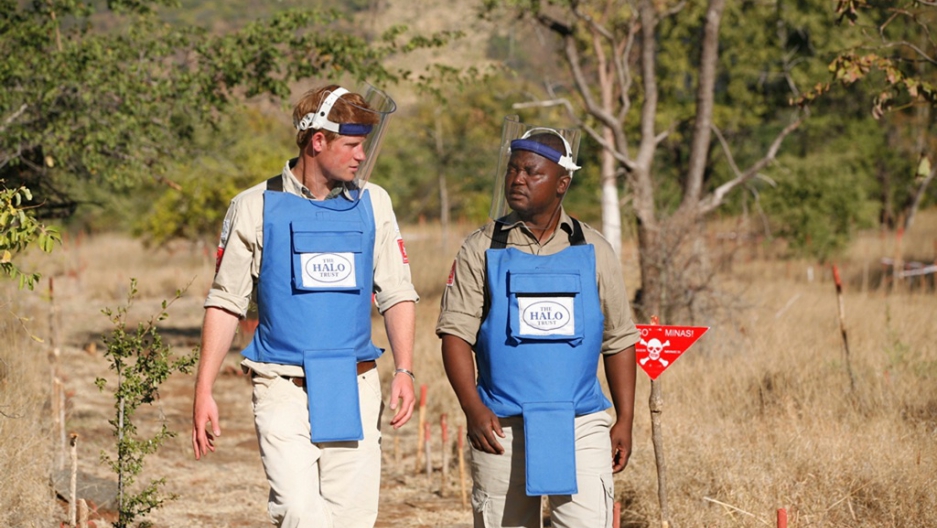 Prince Harry talks to a de-miner from the HALO Trust in Cahora Bassa, Mozambique, on June 21, 2010.
Credit: The HALO Trust
Share

It was one of the late Princess Diana’s most memorable photo-ops: In 1997, the British royal brought attention to the danger of landmines in Angola by observing mine-clearing efforts in Huambo and Cuito while wearing a protective helmet.

Her son, Prince Harry, is doing his part to keep the issue in the public consciousness. Britain’s fourth-in-line to the throne has arrived in Angola to visit minefields that were planted there during its 1975-2002 civil war.

"Prince Harry is visiting a number of de-mining teams across the region and will be touring minefields and meeting with beneficiaries of HALO's work," Guy Willoughby, chief executive of the landmine-clearing charity the HALO Trust, said.

Harry will travel to the southern Angolan town of Cuito Cuanavale, believed to be the most densely-mined town in Africa, according to HALO.

HALO workers have destroyed more than 21,300 anti-personnel and anti-tank mines in Angola since 1994, but there were at least 533 confirmed minefields still in need of clearance as of November 2012, HALO officials said.

Landmines have killed thousands of Angolans in the past decade and made it impossible to grow food, graze animals or build houses in much of the country.

Harry visited Mozambique, another heavily-mined country, with HALO in 2010.