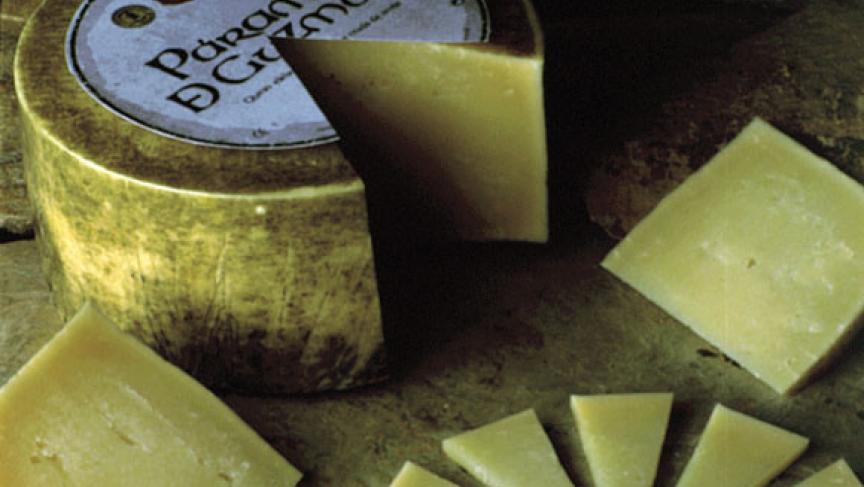 Need some quick calories? We have an edible Geo Quiz for you.

Many countries have their own signature cheeses.

But we want you to name an unusual cheese that's made in Spain.

It's a hard, sheep's milk cheese that's been made for centuries in the medieval Castilian village of Guzman.

That's in the northern province of Burgos.

This cheese is traditionally aged in the local caves there where legend has it– it takes on magical qualities.

It's rare to find in gourmet shops–but if you do find it–it goes for about $22 a pound.

Michael Paterniti wanted this cheese badly enough that he sought out the tiny village of Guzman–and describes what he found as the "world's greatest piece of cheese."

He's the author of the new book, "The Telling Room: A Tale of Love, Betrayal, Revenge, and the World's greatest Piece of Cheese."

But there are plenty of other great cheese out there in the world. Here's a sampling of recommendations from our Geo Quiz listeners / Geo Text game players:

"Tintern cheese from the country of Wales. Named after the monks who grew the shallots that were put into the cheese." Ericin Tacoma, WA

"I love Oaxaca cheese when it comes in a big stringy ball. Have never found good Oaxaca cheese outside of Oaxaca and Puebla, MX. Guess it doesn't travel well." Walpole, MA

"Cheese with loroco. Loroco is the flower of the fernaldia pandurata plant native of El Salvador and Guatemala." Miguel in Country Lakes, FL

"Cypress grove humboldt fog. From right here in humboldt county ca. I drive by the goats every day." Jonathan in McKinleyville, CA

"Norwegian gjetost- slightly and oddly fishy taste, oily, generally unpleasant to non-Norwegians, may be a nationally acquired taste like marmite and retsina." Teri in Cambridge, MA

"I ordered a cheese omelet while in Vietnam. When it came I opened up the omelet and inside was 2 cold triangles of laughing cow cheese. They don't have cows." Melissa in Vancouver, WA

"Cave cheese from France literally taste like the stale stagnant air that fills a cave. Interesting concept but not a cheese I plan on eating again!" Jewlee in Longmont, CO

"Queso fresco from San Juan Comalapa, Guatemala! Salty and soft and wrapped in a banana leaf! Delicious!" Rebecca in Portland, OR

"Long tendrils of twisted, brown, salty smoked cheese at a roadside market in Semirechye Kazakhstan, somewhere on the steppe between Almaty and Taldy Korg." Julia in Tampa, FL

"In Salvador, Bahia Brasil. The little kids selling/yelling 'Queijo' on the cobblestreets while swinging red hot coal canisters to grill the cheese on." Jonelle in Miami, FL

"Halloumi from the island of Cyprus… delicious!" Jack in Bellingham, WA

"Snofrisk, a soft goat and cow cheese from Norway, made by Tine." Tanayle in Seattle, WA

"White American, from the Subway in my building at work." Zuhair in Riverside,CA

"My all-time favorite is Stilton, from England. Not sure if it's from a particular region, though." Jill in San Jose, CA

"Brunost A brown cheese from Norway." Kristen in Greenwood, WA

"I love Asiago cheese, not sure but I think it comes from Italy." Elizabeth in Millvale, PA

"On a drive from Toledo to Alicante in Spain we stopped for gas at a truck stop outside of Albacete. The cashier convinced me to buy a round of Monchego." Tom in Flagstaff, AZ

"Drunken Goat from the Mercia region of Spain. Delicious!" Joanna in Tucson, AZ

"I don't remember the name. It was a French cheese similar to Brie and smelled like feet, but tasted delicious and creamy. We've nicknamed it foot cheese." Leigh in Artesia, CA