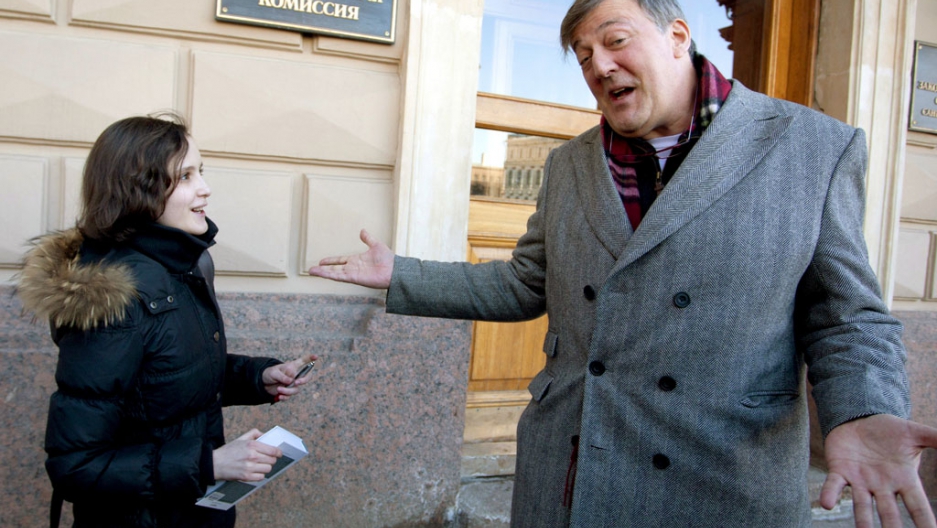 British actor Stephen Fry speaks to a fan outside Saint Petersburg city hall on March 14, 2013. Fry, who is openly gay, clashed with the Russian politician Vitaly Milonov as they talked about a controversial law activists see as violating the rights of gays.
Credit: AFP
Share

Actor, author and gay rights activist Stephen Fry is comparing Russian President Vladimir Putin to Adolph Hitler in a campaign to have Russia lose the 2014 Winter Olympics in Sochi over the country’s stance on homosexuality.

Fry published his thoughts on his website in a letter addressed to the International Olympic Committee and British Prime Minister David Cameron in hopes of upping the political pressure on Russia.

He urged the IOC to avoid repeating past mistakes when it “paid precisely no attention” to Hitler’s laws against Jews before the “notorious” 1936 Berlin Games.

“Putin is eerily repeating this insane crime, only this time against LGBT Russians,” Fry wrote. “Beatings, murders and humiliations are ignored by the police. Any defence or sane discussion of homosexuality is against the law.”

Russia has enacted laws limiting “homosexual propaganda,” meaning fines for anyone convicted of glorifying or portraying a same-sex lifestyle to children.

The laws worry most human rights campaigners because they’re regressive and worded so loosely they could subject gays to punitive treatment for almost anything.

Fry, known for popular roles in “Blackadder,” “V is for Vendetta” and the most recent Sherlock Holmes film, said the Olympics could be staged where there’s “real winter” without much fuss.

“An absolute ban on the Russian Winter Olympics of 2014 in Sochi is simply essential,” Fry writes. “Stage them elsewhere in Utah, Lillehammer, anywhere you like. At all costs, Putin cannot be seen to have the approval of the civilized world.”

"An alternative location would be a Montreal-Lake Placid-Quebec City games. All facilities open by Dec 15. Real Winter. We are ready" Wow!

He's not the only celebrity to push for action. George Takei, who played Mr. Sulu in the "Star Trek" franchise, is promoting a petition at Change.org to move the Games back to Vancouver.

The Canadian city hosted the last Winter Olympics in 2010.

"The IOC must do the right thing, protect its athletes and the fans, and move the 2014 Winter Olympics out of Russia," Takei writes.

According to The Guardian, reports of homophobia-related crimes have increased sharply in Russia since the laws passed earlier this year.

A representative from Cameron’s government said the UK has routinely broached the subject with Russian authorities.

“We remain greatly concerned about the growing restrictions on LGBT freedoms in Russia,” the government spokesperson said. “The prime minister outlined our concerns with President Putin during a meeting in Downing Street in June ahead of the G8 Summit.”

Boycotts are widely seen as ineffective, and there seems little appetite among politicians and the IOC to endure the first since 1984 in Los Angeles.

In an appearance on "The Tonight Show" with Jay Leno on Tuesday, US President Barack Obama said he had “no patience” for discrimination against homosexuals.

“Putin and Russia have a big stake in making sure the Olympics work,” Obama said, “and I think they understand that for most of the countries that participate in the Olympics, we wouldn't tolerate gays and lesbians being treated differently.”

More from GlobalPost: Will they or won’t they? Russia’s anti-gay laws and the 2014 Winter Games