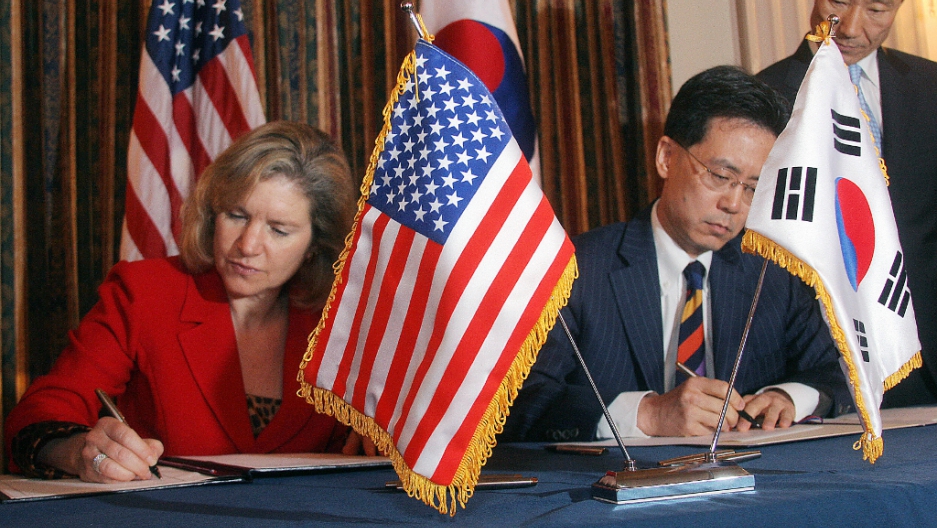 SEOUL, South Korea — Although the Korea-US Free Trade Agreement (KORUS FTA) has been in effect for little more than a year, it is already drawing vehement condemnation from both sides of the Pacific.

It wasn't supposed to be this way.

The Obama administration feted KORUS as a veritable job-creation machine, a remedy for the tepid post-crisis recovery. When the US Congress voted in favor of the deal in October 2011, the president called it “a major win for American workers and businesses.” Some proclaimed that KORUS was the most significant trade agreement since NAFTA in 1994.

The US forecast an additional 70,000 American jobs from exports alone. The International Trade Commission estimated the pact would kick-start some $10 billion in US exports to Korea, improving the trade balance by a net $4 billion or more, a boon to the economy.

But already, it’s not clear that the agreement is living up to its promise.

In the US, critics claim that KORUS, which went into force in April 2012, is costing American jobs.

A report published last month by the Economic Policy Institute (EPI), a left-leaning Washington think tank, puts the first-year US job-loss figure at up to 40,000.

“I expected it to turn out this way,” explains Robert E. Scott, the report’s author and director of trade and manufacturing policy research at EPI. “We were watching the monthly trade data, and were aware of this for some time.”

Scott argues that the government erred in its prediction of an export windfall as the driver of job creation. In the process, White House officials ignored the flip side: a spike in imports from South Korea, a burden that may have ignited American lay-offs.

Before the KORUS FTA, the US ran a substantial trade deficit with South Korea. In 2011, imports of goods to the US exceeded exports to Korea by $13 billion.

Autos accounted for much of this. Hyundai cars sold well in the US. But American icons like Ford and GM couldn’t surmount South Korea’s blistering tariffs and preferential treatment for local competitors.

The FTA leveled the playing field, eliminating almost 80 percent of tariffs on American exports, a number slated to rise to 95 percent in five years of implementation. In turn US automobile exports to South Korea have risen by 50 percent one year out. But that number only translates to a mere 1000 more American car sales in Korea, compared to the 1.3 million Korean cars sold in the US.

A year after ratification, the trade gap actually grew by $5.8 billion, or more than one-third, according to Scott.

Others aren’t sure about declaring KORUS a failure.

Some parts of it have yet to be put into force. Firms also need time to adjust to the new rules, and to set up sales networks in new countries where the distribution channels might not be entirely open yet, explain economists Ozlem Yaylaci and Serge Shikher.

“Most tariffs will be removed within 10 years,” says Yaylaci, a Massachusetts-based economist at IHS Global Insight, a research and consulting firm. “All in all, we need to wait a few more years before accurately evaluating the impact of KORUS,” she said.

Many Korean imports could actually benefit American businesses and, by proxy, their workers, she added. The chaebol, or conglomerates like Samsung, LG, and Hyundai, are global leaders in steel, petrochemicals, machinery and high-tech parts. American companies are their major customers for the components of cars and electronics.

Now American manufacturers, especially in the auto industry, can get them for less, potentially boosting profits and providing a competitive edge.

In a historically protectionist nation, opposition lawmakers contend the global hegemon is chipping away at Korean sovereignty and hurting its workforce. It is an issue that has long divided the electorate between pro-American and anti-free trade camps.

Case in point: even before the agreement, Korean farmers were vulnerable to obsolescence, threatened by old age and Chinese competition. The average Korean farmer is well over sixty. Young, productive workers are increasingly rare. South Korea is home to a lopsided development gap between its hyper-connected cities and countryside. Many farmers are relatively poor.

Yet farmers are bracing for an onslaught of US produce, farmed on huge fields with expensive equipment.

Washington compounds the problem by subsidizing its farmers, and promoting an annual food surplus. Some of the produce is exported around the world at low costs, putting local competitors out of business. In response, the South Korean government is offering subsidies to struggling farmers.

Since KORUS went into effect, agricultural exports to the US have actually grown, and imports fallen. But some experts attribute this to a bad harvest in the US, and not the long-term effects of free trade.

Korean objections to KORUS FTA are not new.

A day before it was approved in 2011, a left-wing parliamentarian suddenly opened a tear gas canister in protest, spewing chemicals and mayhem on the National Assembly floor.

Anti-free trade protests have swept the nation too. In 2008, when rules for American beef imports were relaxed, Koreans took to the streets enraged over perceived health hazards. The massive rallies destroyed the conservative president’s approval rating, and hurt his standing on the FTA for the years to come.

South Korean dictators also slapped heavy tariffs on foreign goods. It would have been impossible for their nascent tycoons to compete with Japanese and Western businesses, who had far more experience.

It is a legacy that hasn’t completely died, even as the government tries to loosen the market and foster opportunity in growing industries. For the Korean left, the threat of American economic dominance lives on.