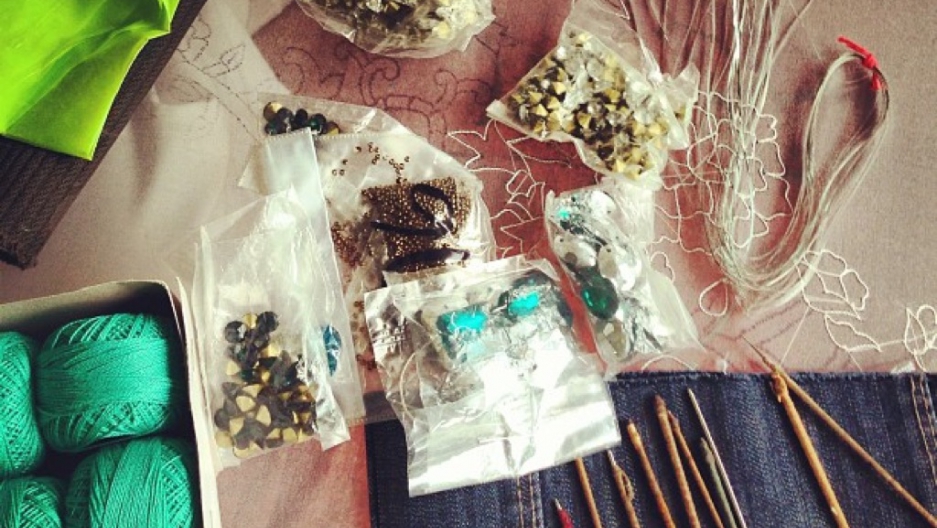 Embroiderers in Karachi's Shabbir Square market will incorporate all of these beads and baubles into one ornate outfit.
Credit: Mariya Karimjee
Share

KARACHI, Pakistan — There's a rhythm to Ramadan. The first few days usually involve a crippling sense of hunger. By the middle of the month, most people have set a routine that includes long afternoon naps and late night parties. But it's the last few days, marked by prolific shopping, that are the most fun.

And then, at long last, it's over.

As soon as the moon is sighted, Muslims in Pakistan fill the streets to celebrate Eid: a three- or four-day holiday of visiting family, exchanging presents and partaking in gluttony. It's one of the few times in Karachi when an overwhelmingly happy energy pervades the city. Everyone's wearing new clothes and new shoes, and lights have been strung up, Christmas-style, around mosques and homes.

For the city's tailors and embroidery craftsmen, those final days before Eid are usually the busiest time of the year. One of the city's embroidery districts — a collection of tiny storefronts lined with sewing machines manned by craftsmen — is a short walk from my house. As a child, I used to love watching the men in Shabbir Square stitch intricate designs into large pieces of thin cloth stretched out on wooden frames.

A tailor in Shabbir Square adds embroidery to a kurta, a long tunic worn in Pakistan, with the aid of a machine. It doesn't allow him the flexibilty to use multiple colors, but the result will be cheaper, he explains. (All images by Mariya Karimjee/ GlobalPost)

According to the tailors, adding these tiny beads is the hardest part of their job. One loose thread can unravel the entire piece.

In the last two years, Shabbir Square's marketplace has become a hotbed of violence. Three days after I moved home last year, the neighborhood chicken supplier refused to pay a political leader his requested extortion fee. The disagreement ended in a shootout, with three killed, including the chicken supplier. In the months since the shooting, Shabbir Square has held strikes to protest political killings, to which it has lost some key members of the community.

The embroiderers are still there, though, diligently adding beads and baubles to ornate outfits. But they say their business has taken a huge hit.

"No one comes here anymore," said one tailor last week, explaining that people are too scared to stand on the side of the road to negotiate prices and look over designs.

There was almost no one shopping or haggling over prices when I visited, which was unusual, and there were more shuttered businesses than I'd seen before. According to many of the tailors, those shops have closed down entirely.

Still, it's clear some people are braving the sidewalks for their Eid outfits. After all, the craftsmen are masters. Customers show up with a photograph or magazine clipping of an ornate outfit. They explain what the ideal piece would look like, and then the tailor gets down to business. He'll determine how many men and how many hours it'll take to complete the design, and if he's responsible for buying the thread and the cloth, he'll tack it on to the fee. Then the parties negotiate prices.

Mohammad, the master embroiderer, says he only buys locally made materials.

Most of the men have been working in the industry for years. They explain that it takes 10 years to move from being an apprentice to mastering the trade. Most wear cheaply made spectacles — the tiny details they're responsible for perfecting take a toll on their eyes.

I'm not one to wear ornate clothes. But most of my family will have their new clothes made here, and no doubt the designs will be beautiful — like this one:

All of these beads and baubles will be incorporated into one outfit.

In Shabbir Square, an embroiderer's apprentice works on a "velvet flower" design.

It'll take the men about 15 days to recreate the embroidery shown in this photograph.