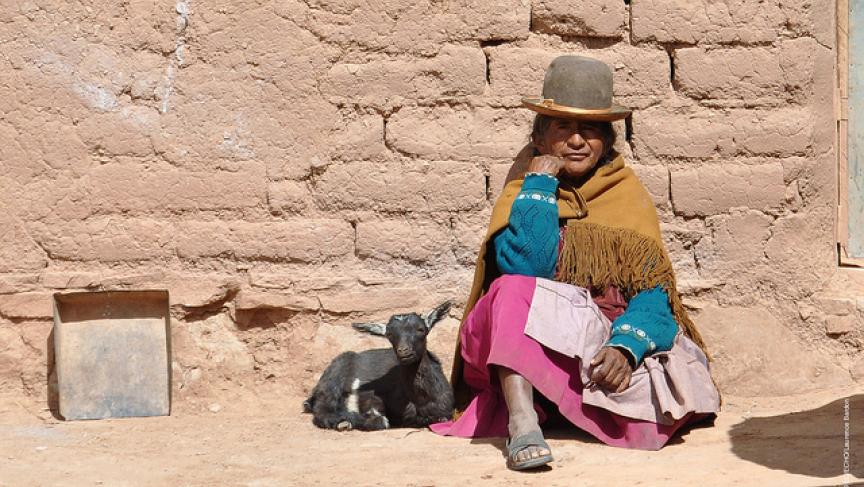 A Bolivian woman is affected by drought on August 22, 2011. (Photo courtesy of the European Commission.)

The effects of global warming are visible. The icecaps are melting and the sensitive equilibrium of Earth's ecosystems is being thrown out of balance.

But a recent study, published in the journal Science, found that humans are affected too, becoming more strongly disposed to aggression and violence as Earth's temperature rises.

A team of researchers from the University of California, Berkeley, discovered the correlation after conducting a meta-study that delved into more than 60 existing studies exploring the connections between violence and abnormal high temperatures.

Taking into account the generally agreed upon estimate of two degrees Celsius of expected temperature rise over the next 50 years, the report revealed shocking expectations of increased violence.

"Just to give you a sense of what the magnitudes are, the estimated average effect of two degrees Celsius warming in tropical Africa on the risk of civil war in Africa would be something on the order of 40 to 50 percent increase in the risk of civil war," said Edward Miguel, co-author of the study and economics professor at the University of California, Berkley.

Also, women are at a higher risk of domestic violence in regions experiencing abnormal heat according to one of the studies looked at by Miguel and his team.

The study found violent activity increasing at consistent levels in various parts of the world, surprising many experts with its reliability. American cities, for example, would expect a five or six percent increase in violence in the event of such a temperature increase.

Recent and impending global warming give extra weight to the study's findings. People could be noticing these effects within their lifetimes.

Despite the modern implications, the researchers discovered that this is an old issue that may have brought down entire civilizations — including the Mayans and several Chinese dynasties.

Researchers pointed to two explanations that explain the study's findings.

"One is a fundamental," Miguel said. "You could think of it as a physiological channel which is at a higher temperatures. People become more aggressive."

The second is that higher temperatures threaten the livelihood of the majority of people in low-income regions like South Asia, Latin America or Sub-Saharan Africa. These people are much more prone to political violence after drought ruins their crops.

It is unclear how governments will adapt to the human reaction to rising temperatures, Miguel said, but conceivably police could start recognizing the link or scientists could begin to develop drought-resistent crops.

"We find that there's typically been quite limited adaptation to climate changes," Miguel said. "So we very much think that further investments and policy changes around adaptation are a key priority, to make sure that we don't suffer all the violence that our paper predicts could occur with the temperature rise."