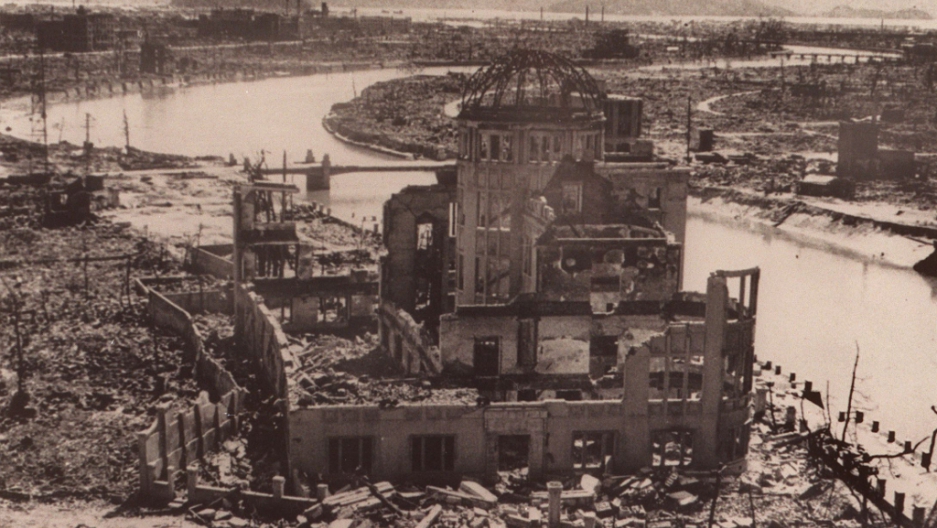 The bombing of Hiroshima left the city leveled and thousands dead, one in five were Korean.
Share

HIROSHIMA, Japan — Sixty-eight years ago today, the radioactive heat of the world’s first atomic bomb attack seared Jongkeun Lee’s skin and incinerated his hair. He was 17 years old when this city was destroyed around him.

“First, it was a yellow light like nothing I’ve ever seen,” Lee said. “Then, everything was black, dark.”

Almost naked, Lee walked home alone through the inferno. All he saw in the darkness were dead and dying people. Maimed and desiccated, those still alive all pleaded for water, he said. Many died before his eyes.

At home Lee surveyed the odorous pus oozing from his burned back, neck and face. Flies laid eggs in the dead skin.

“I would say to my mother ‘please, just kill me.’” Lee said. “She was crying when she was pulling the maggots from my back. I can still feel her tears dropping on my skin.”

Lee was among the more than 80,000 Koreans living in Hiroshima on Aug. 6, 1945. Most were compelled to leave Korea, a Japanese colony at the time, to work as forced laborers in Japan before and during World War II.

After the war, Hiroshima was rebuilt upon once-irradiated ashes, but those who survived the bombing would for the rest of their lives suffer its effects.

Chronic illness caused by the bomb's radiation prompted the Japanese government to create a program that entitled survivors to a lifetime of medical compensation. Certificates of eligibility were issued to any one living in Japan who could prove they survived the bombing.

However, circumstances often prevented the Koreans from claiming benefits.

Food and jobs were scarce in post-war Japan, worsening already-endemic xenophobia. Many survivors returned to Korea to escape destitution and discrimination in Japan.

That rendered them ineligible for compensation until 2003, when a lawsuit expanded the service.

Now Lee, who remained in Japan but has kept his Korean name, is rushing to motivate survivors of the bombing in South Korea to apply for compensation. They’re usually resistant to seek assistance, Lee said, because like him, they’ve experienced lives of illness and discrimination.

Lee was among the lucky few who managed to get Japanese government aid for his ongoing ailments.

Still, his life remained arduous, given his status as a bomb survivor and as a shunned Korean in Japan.

In Japan, survivors became known as “hibakusha,” or “bomb person.” Initially a pejorative term, hibakusha carried a stigma because many Japanese feared exposure to the bomb’s radiation had contagious and hereditary effects.

There was some truth to this. In addition to the burns, the bomb’s effects gave Lee radiation sickness, which caused chronic lethargy and diarrhea, acute symptoms that lasted for months. Lee, now 86, said he still feels the lethargy, and attributed recent organ troubles to the bomb’s effects.

Lee avoided employment discrimination because his family had its own business, making charcoal. Still, they had trouble getting loans. “Banks wouldn’t lend money to us,” Lee said. “It’s because we were Korean. They said ‘You’re all lazy.’”

Ironically, it was such racism that brought Lee to Hiroshima in the first place.

Years before the bombing, strangers harassed Lee in the streets. His offense: being Korean. “They would yell slurs and piss on me,” Lee said. “I was a child, alone, and they would walk up and piss on me.”

Rather than suffer more abuse, in the 1940s Lee’s family bought a home in an all-Korean Hiroshima neighborhood, where they thought they would be safer.

Then the bomb fell.

While Lee relied on his survivor’s certificate for free medical care, those living in Korea went decades without compensation. Then in 2003 a survivors’ group called the Association of Citizens for Supporting South Korean Atomic Bomb Victims helped a South Korean successfully sue the Japanese government for compensation.

The survivor was rewarded a yearly allowance and ¥1 million (almost $10,000).  The Japanese government had set a precedent, said Satoshi Mukaiyama, a lawyer who represents foreign survivors, said. Foreign survivors were thereafter eligible for certificates and entitled to similar rewards.

Now, Lee works with the association to secure certificates from the Japanese government, and encourages survivors to apply for them.

Eligibility is determined in several ways. Survivors who were in-utero or people who entered Hiroshima to help after the bombing are eligible, for example. It’s impossible to say how many South Koreans would have been treated if the Japanese government had granted them certificates sooner, said Namjoo Park, a survivor of the atomic bombing and member of the association.

“Survivors often have prostate, stomach and thyroid cancer,” said Park. “They can’t afford to treat these diseases without a certificate from the Japanese government.”

The association is racing to convince survivors to apply for certificates before it’s too late to prove their eligibility. “So many people who could testify for the survivors are dead,” she said.

Though more than 2,000 survivors have become certified since 2003, it’s impossible to say how many remain, because they fear discussing their experiences, Park said. But one place is altogether inaccessible.

“There are many in North Korea who have no help at all,” Park said.

Keisaburo Toyonaga, the association’s Hiroshima director, said only one North Korean survivor has received a certificate and that there are might be as many as 300 more yet to help.