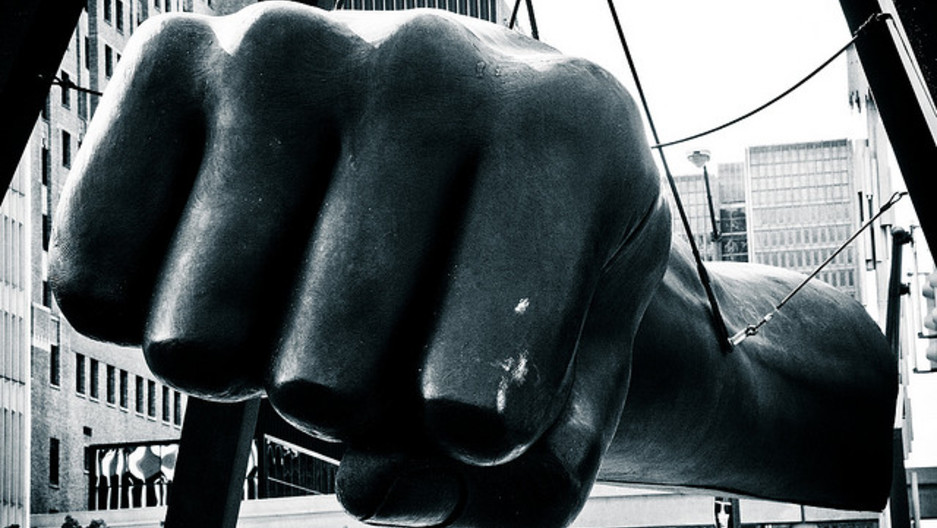 A monument of boxer Joe Louis' fist in Detroit is considered by many to be a symbol of strength. (Photo courtesy of Flickr user Kate Sumbler.)

Federal officials have said they have no plans to bailout the bankrupt city of Detroit — the largest American city ever to file for court protection from creditors.

That position has rankled city residents and local government officials who've pointed to the $700 billion the government gave banks and the auto industry during the Great Recession in 2008.

The cool reception Detroit is now receiving from Congress may be the result of the rising national debt and March's automatic spending cuts, known as the sequester, which have caused most government agencies to reduce their spending. The economic climate is different today than in 2008 and not in Detroit's favor.

The 2008 bailouts are generally regarded as successful and President Barack Obama has talked about the auto bailout as one of his greatest successes.

"I believe in American workers. I believe in this American industry and now the American auto industry has come roaring back. GM is number one again," President Obama said.

But evidently that won't be extended to the city of Detroit. The city's collapse and the government's choice not to step in have led some to question the resources spent in foreign aid. Colombia, for example, would receive $323 million — more than three times the amount of federal funding allotted for Detroit — in U.S. government support.

While Detroit has just about one percent of the population of Colombia, the numbers don't look good to critics and have provided fodder for critics of the government.

Supporters of the city want to see assistance from the government and argue that unlike a corporation, Detroit is a city with infrastructure, history and plenty of people still living there.

"A city is an essential entity, it's an essential institution in a metropolitan area, in a region and I think these older industrial cities are essential. They're not going awa,y unlike bankruptcy in a corporation where the corporation itself could be liquidated," said Dan Kildee, Democratic Congressman from Flint, Mich. "Its parts could be sold off and it could be reconstituted, or not, under a different form. In the case of a city, we don't have a choice of making that place just go away. It will be there, whether or not it goes throughout bankruptcy, there will be 700,000 people living in that place."

Detroit, like many aging industrial cities, has been on an economic decline since its population peaked in 1950 when it was the fourth-largest city in the U.S. By the year 2007, about 36 percent of Detroit residents were living below the poverty line.

Those looking for a bailout point to other times federal funds have been directed to devastated cities. For example, they say, in 2005, the U.S. government gave $142 billion in federal recovery aid to the Gulf Coast after it was ravaged by Hurricane Katrina.

"Detroit is what we have referred to as a 'slow motion Katrina'," Kildee said.

As Detroit begins the long process of recovery, other similar cities are also in danger, Kildee said.

"It's not just Detroit, there's a whole subset of American cities, older industrial cities especially that are at serious risk and if we don't take action we will pay a price as a nation and as a society," Kildee said.