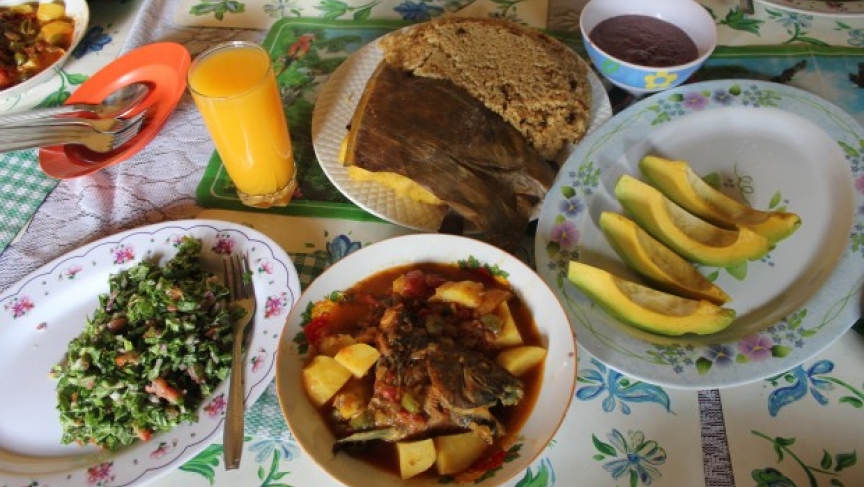 A meal prepared by Joyce Kayongo in Uganda, with native tilapia and greens from a low-tech aquaponic system designed by her husband, Charles Mulamata. Although they live in the city, nearly all the ingredients were sourced from the neighborhood.

It’s a question just about everyone on the planet asks every day, but it’s also one that most of us don’t really have to think much about. If we’re lucky enough not to be among the world’s billion or so chronically undernourished souls, we can generally be confident that whatever we have for lunch — or breakfast, or dinner — will be tasty, familiar, affordable and as available as ever.

But for how much longer?

Climate change is starting to reshape the world as we know it, and agriculture — that vast, abstract beast of a process that brings all of us our food and is the basis for all human civilization — is in the cross-hairs. It’s being affected by climate change — by changes in weather patterns, water supplies, growing seasons, ranges of harmful and beneficial insects and just about every natural factor it depends on — and it’s also a major contributor to climate change, through its massive consumption of fossil fuels and its production of greenhouse gases like methane and nitrous oxide.

So coming or going — as both a casualty and a cause of climate change — what’s for lunch will and must change. The only real question is whether people around the world will largely be victims of that change, or can get out ahead of it.

That’s what The World’s What’s for Lunch project is about — how people around the world are responding to the climate challenge by rethinking what they eat, how they grow food, and how it gets from the soil to our stomachs.

Some of these changes might be big and technologically complex, some small and relatively simple. Some are highly controversial, others are no-brainers. All of them are part of the sprawling global effort to find our way to a food system that’s more resilient, productive, environmentally benign and sustainable.

The World’s summer-long journey through our changing global lunchscape will introduce us to innovators, activists and farmers who are each grappling with a piece of the climate challenge.

In Qatar, we’ll meet scientists and engineers who are building a high-tech facility where they hope to harness sunlight, seawater and CO2 emissions to grow food and generate energy in one of the most food-challenged parts of the world.

In Mexico, we’ll sample a nutritious local grain that was banned by Spanish invaders centuries ago but is making a comeback as a resilient alternative to more vulnerable crops like corn and wheat.

In China, we’ll sit down for lunch with activists spearheading grassroots campaigns to reduce the country’s booming appetite for greenhouse gas-intensive meat and to tackle its burgeoning problem of food waste.

In Uganda, we’ll visit with an entrepreneur working to promote a highly-productive, low-impact system for producing fish and vegetables, and we’ll enter the global battle over genetically-modified foods through a fight over the humble but extremely hardy crop cassava.

And in the Netherlands, India, Costa Rica, Singapore, and the US — well, stay tuned as the series unfolds over the summer of 2013 on The World.

Also, we’re hoping you’ll not just stay tuned but get involved. We want to know how you’re changing the ways you’re eating in response to climate change or other environmental pressures. Take a photo of your “changed lunch” (or breakfast, or dinner), tag it on Instagram with #whats4lunch, and tell us what’s different and why.