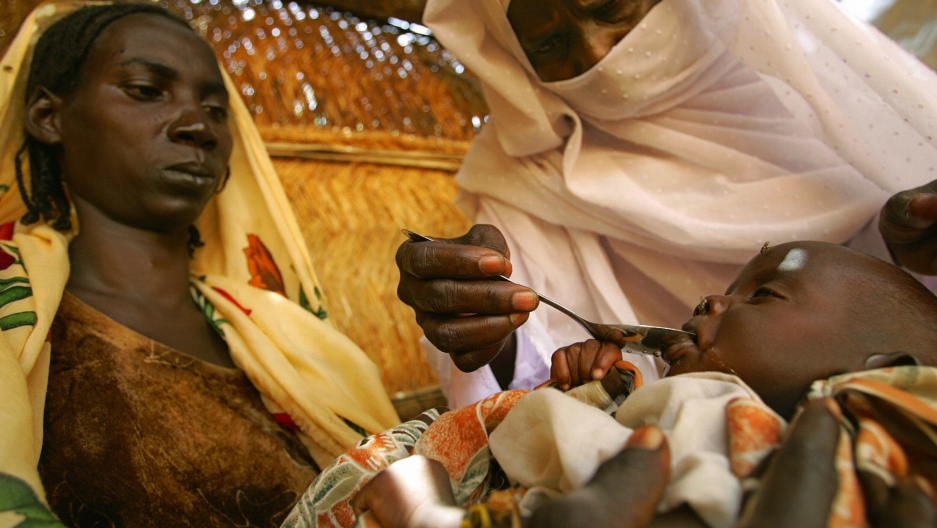 A Sudanese mother holds her 12 day-old baby on her lap as a nurse feeds him medicine to fight diarrhea and dehydration 16 September 2004 at a Save the Children/US Aid Clinic in the Internally Displaced Persons camp of Krinding on the outskirts of the western town of El-Geneina.
Credit: Cris Bouroncle
Share

Most of the money for US global health programs comes from the State and Foreign Operations budget, which also funds anti-poverty initiatives. Overall, the House cut foreign aid by $8 million, while the Senate cut it by $2.7 million.

Moving forward, the bills, which got committee approval last week, will go to the House and Senate floors so the general assembly can weigh in. Then the two houses will have to reconcile differences before the end of the fiscal year Sept. 30 — or risk government shutdown.

Both Senate and House verisons of the the State and Foreign Operations budget keep funding at or above FY 2012 levels for maternal and child health, which includes immunization programs. The House met the President’s request for $680 million — a $74 million bump over FY 2012 — and the Senate set aside $706 million. For malaria, which is a leading cause of death for children in the developing world, the House kept spending level at $250 million and the Senate threw in an extra $17 million. Both bills met or exceeded the White House’s recommendations for nutrition and vulnerable children.

“The support is hard earned,” said Nora O’Connell, associate vice president of public policy and advocacy at Save the Children. About 7 million children under five still die each year, but, since 1990, the world’s child mortality rates have dropped 41 percent.

“This is the time to lean in,” O’Connell said. “We can actually envision an end to preventable child death.”

In general, the global health community is relieved, said Erin Hohlfelder, global health policy director for ONE. “Global health survived while a lot of other international development programs got gutted.”

But while global health may be a separate line item on the budget, it’s heavily intertwined with other development concerns like access to clean water and adequate shelter, said Robert Zachritz, senior director for advocacy and government relations for World Vision US. The most remarkable differences between the two State and Foreign Operations bills have nothing to do with USAID- or State Department-run health programs.

The House cut US contributions to specialized UN agencies out of the budget altogether. That includes funding for programs such as the United Nations Children’s Fund (UNICEF), which, among other things, administers child survival and nutrition programs, and the United Nations Population Fund (UNFPA), a champion for family planning and reproductive health. The Senate, by comparison, gave $132 million to UNICEF and $40 million to UNFPA.

The Senate bill keeps international development assistance funding level, but the House bill cuts it by 26 percent. That means there will be less money for things like education, microfinance and clean water initiatives, Zachritz said — all of which affect health.

About 2,000 children under the age of five die from diarrheal disease every day, according to UNICEF. Of these, 1,800 can be linked directly to water and sanitation. Countries where a large percentage of the population doesn’t have access to clean water account for the highest number of child deaths. For example, in India, which accounts for one-fourth of the world’s child mortality, 97 million people are drinking dirty water.

A recent study from the Institute for Health Metrics and Evaluation attributes as much as half of the reduction in child mortality since 1970 to improved maternal education. Better-educated women are more likely to take their children to a health clinic when they are sick and follow the doctor’s directions for treatment, according to the study. They are more likely to understand and use disease prevention measures like vaccines and mosquito nets. Because they better to understand germ theory, they make clean water and sanitation a higher priority.

“All these things are connected,” Zachritz said. “If children drink contaminated water, they get sick. Women who are more educated have healthier babies. Micro financing prevents malnutrition because it helps people make enough money to feed their families.”

State and Foreign Operations, which comprises less than 1 percent of the federal budget, is just one of 12 budgets Congress must settle. If the House and Senate cannot come to an agreement by the end of the Congressional fiscal year — a likely scenario, political pundits say — they will have to enact a continuing resolution, which would fund federal programs at the current level until an appropriations bill passes. Otherwise, the government will shut down.