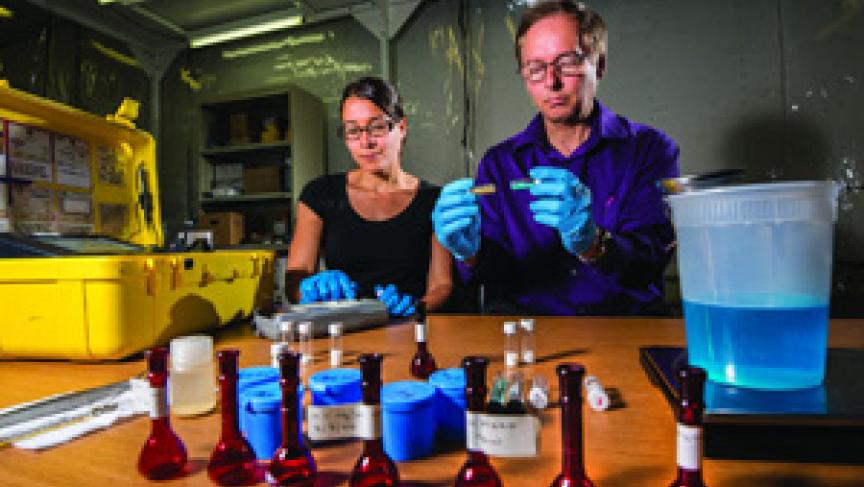 In the mountains of southern New Mexico, a group of researchers is setting off a car bomb in the back of a white Chevy Camaro.

The bomb is made of ammonium nitrate.

Farmers around the world use the fertilizer to improve their crop yields. But the same material is also highly detonable. It’s a favorite ingredient to make deadly homemade bombs such as the improvised explosive devices — IEDs used in Afghanistan against NATO forces.

When the bomb explodes in the car, you see it before you hear it, like a lightning storm.

He says this test explosion is a lot like a typical car bomb blast in Afghanistan — it doesn't take much in the way of raw materials to make a big impact.

“There’s been a lot of lives taken from car bombs,” he said. “It’s very simple to put together and it’s very mobile.”

“There’s millions and millions of pounds of this used every year. Almost all the car bombs in Iraq and Afghanistan now are ampho,” said Romero, using the shorthand term for a mixture of ammonium nitrate and fuel.

Using fertilizer to make a bomb is nothing new. It’s been used to make explosives all over the world since World War II, from IRA street bombs in Northern Ireland to the Oklahoma City bombing.

Scientists have tried to make fertilizer less explosive, but they haven't had much success. In previous attempts, bomb makers have quickly figured out how to extract the chemicals they need to make a bomb.

That’s where Kevin Fleming comes in. He’s a retired optical engineer who spent his career working with Sandia National Labs in Albuquerque. He’s been looking at this particular problem on a molecular level.

“Ammonium nitrate is a pretty tenacious little molecule,” he said. “It really takes a lot of other stuff in there to make it not detonate.”

In other words, it takes a lot of inert stuff to overcome ammonium nitrate's explosive potential, which ultimately makes for a bad fertilizer.

“The farmers need something that works,” he added. “In a perfect world, you would have a good fertilizer that doesn't detonate.”

The key to the new formula involves mixing the fertilizer with the chemical compound iron sulfate. Theoretically, the new mixture won't explode — even when it’s tinkered with. And in a serendipitous twist, Fleming says, what you end up with is a more effective plant food.

The project has become a personal mission for Fleming. For years, he taught American soldiers how to make and disarm IEDs. The idea was that by knowing how the explosives are made, soldiers can more accurately tell the difference between a bomb and harmless items used by civilians.

“It’s just hard to imagine, sitting there talking with people, these young vibrant people, and then you see their obituary or maybe their legs are gone and they’re trying to get fitted with some prosthetics,” Fleming said.

According to the Pentagon’s Joint IED Defeat Organization, IEDs killed or wounded about 1,900 troops in Afghanistan in 2012; and there are more than 700 IED incidents occurring on a monthly basis around the world.

Fleming’s research is still in the early stages. While he says he knows his formula works in the lab, it needs more development to see if it’s practical on an industrial scale.

“The profit to me is a few less people injured or dead from IEDs made with fertilizers,” he said.

Fleming adds that if solving this problem is possible, it would be a huge breakthrough for the fertilizer industry, as well as a lifesaver worldwide.