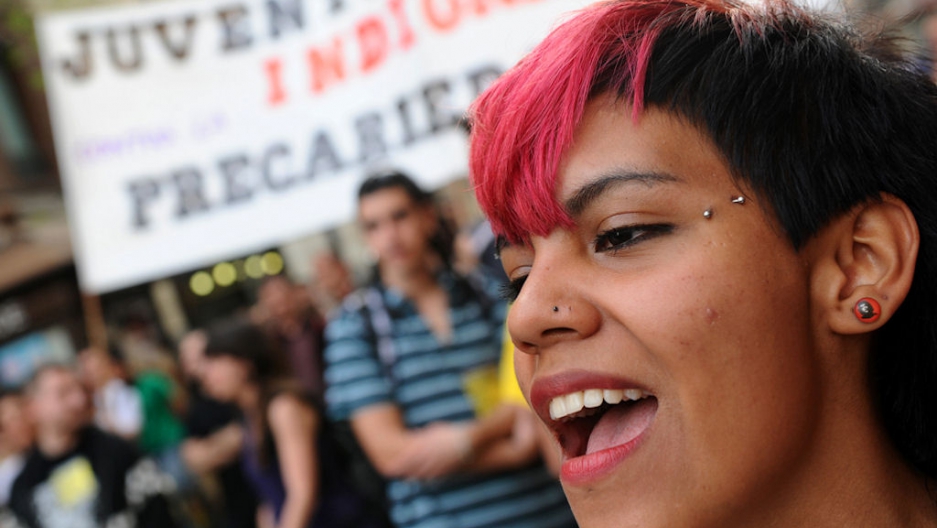 Young people take part in a demonstration in Madrid on April 7, 2011 to protest against high unemployment, job insecurity and government spending cuts. Organizers of the Facebook group "Youth Without a Future," which has more than 7,000 followers, said they were inspired by the youth uprisings in North Africa and similar protests in other European nations.
Credit: Dominique Faget
Share

Unemployment fell in the euro zone for the first time in over two years, according to data released Wednesday.

The figures from June show that 24,000 fewer Europeans were considered unemployed as compared to May, despite unemployment remaining at record highs.

The jobless rate in the 17-member euro zone remained high at 12.1 percent, and a decrease in spending by shoppers in France Germany, and Spain is expected to mar the promising new data.

Domestic demand across Europe remained weak due to the downturn and the austerity measures implemented by many nations.

In the 27-member European Union, the unemployment rate was 10.9 percent, down from 11 percent in May.

More from GlobalPost: Euro zone in longest recession ever since records began in 1995

The jobless rate for young people, particularly in Spain and Greece, caused worry, with nearly 60 percent of people between 16 and 25 out of work.

Youth unemployment across the euro zone was nearly 24 percent, a slight increase during the summer months.