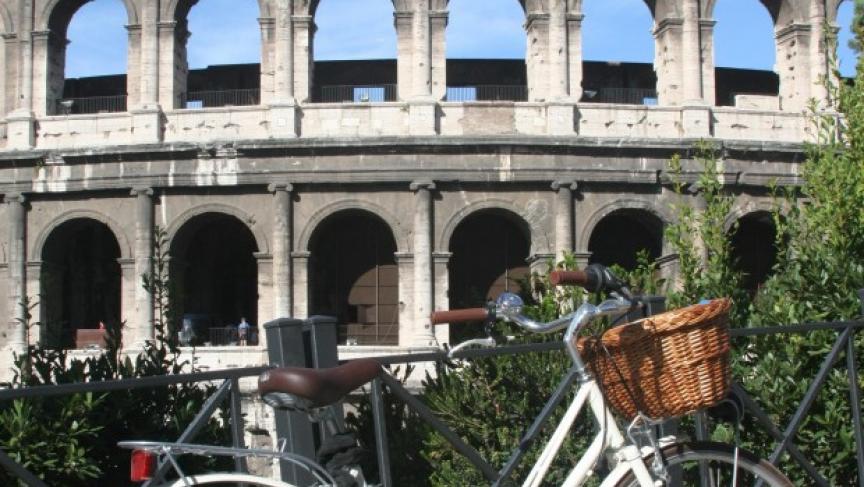 Vespas, Fiats, and the occasional Ferrari all play a role in the traffic chaos that is modern Rome. But if you listen carefully, there's a small, yet persistent, voice starting to be heard. Ding! Ding! According to Italy's transportation ministry, Italians bought 1.65 million bicycles last year. That's more than the number of new cars sold in the same period. Not since the 1960s have Italians been so keen on cycling. Rafaella De Felice thinks bicycling is perfect. She bought her bike about four months ago, for practical and personal reasons. "It was just because I broke up with my boyfriend," she says. "So I needed something to do during the weekend. She says it's working. "Yes, absolutely, it's perfect," she says. "I'm not joking. You go with your bike and can see the sunsets on Sunday and it's perfect. I've discovered a new city, a new city on the bike." The problem is that new city is still dominated by cars: 970 for every 1,000 adults. Rome is one of the most vehicle-clogged cities in the world. This is where Ignazio Marino comes in. He's the newly elected mayor of Rome. "I always loved to bike," he says. "And I have not have a car for 11 years." Marino takes me to his office balcony to show me something that's clearly got his goat: right through the middle of the Imperial Forum and the Roman Forum–the same place where Marc Antony gave the funeral oration for Julius Caesar—is a modern street built by Benito Mussolini to parade his Fascist legions. "It's just insane," he says. "You know, to build across this area that in my vision doesn't even belong to Romans. This belongs to Western history. And you build in the middle of it a high-traffic street." Starting August 3rd, he's kicking out private vehicles from the part of the street that rings around the side of the Colosseum. "If you had the Colosseum in London, do you think you would use it as a roundabout? I think not," he says. "And this is what we're doing every day. There are thousands and thousands and thousands of vehicles going around it every day. And this is the most famous monument that Italy has." Eventually he wants cars out of the entire area. So what to do with all the cars? After all, Italians for the most part still depend on them. And the mighty auto industry is a pillar of the national economy. But as it turns out, it's not so mighty anymore. "There was a point in history when Alfa Romeo was thinking to buy BMW out. Can you imagine this today?" asks Roberto Vavassori, President of ANFIA, the Italian automotive association. Vavassori says the eurozone crisis and Italy's worst recession in decades have already forced a change in driving habits. In 2007, Italians bought 2.5 million cars. This year, that number is projected to be down by at least 1 million. Another factor is high-speed trains and other alternative modes of transportation. Vavassori includes the internet in this category, which allows people to travel the world at the click of a mouse. He adds that car ownership is also losing its luster among young people who've been hit hardest by the economic downturn. "I see this tendency where youngsters, people under 30, are not necessarily wanting to have a driving license," he says. "And this is not only true in big cities such as London, Paris, Frankfurt, but also Milan or Rome. We have more than 10 percent of youngsters not getting a license because they feel it is no longer necessary to own a car or even use a car." He also sees parallels with the United States, where the amount of young people with licenses has been steadily declining for decades. In Rome, the mayor knows making a large scale switch from four wheels to two isn't going to happen overnight, especially given the city's reputation for unruly drivers. "At the present time with the traffic, with the aggressiveness of some of the drivers in Rome, it's at times scary," says Marino. "But on average I can tell you that I move by bike, while people of my staff move by car, and usually I get there first." But he admits that in a city famous for its seven hills, this is an uphill pedal if there ever was one.