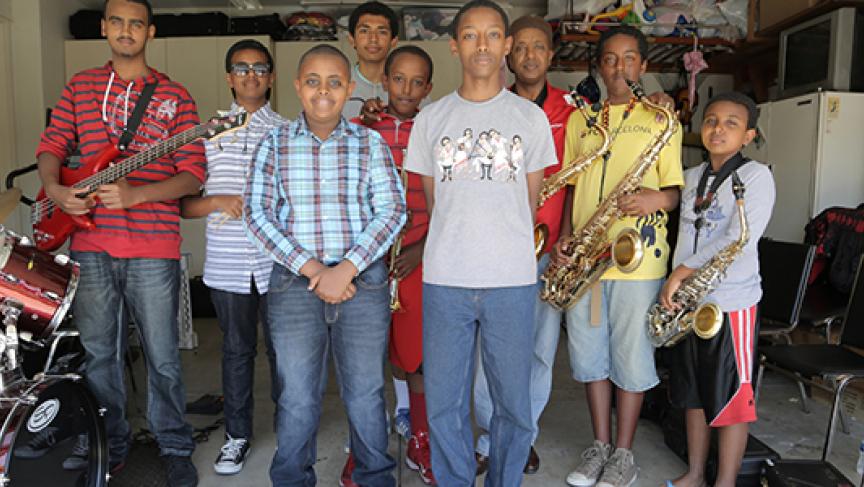 Members of the Young Ethio Jazz Band use this garage for practice. (Photo by Noam Eshel.)

It’s a truth universally acknowledged that kids hate their parents’ music, or at least do their best to ignore it.

Garage bands don’t borrow CDs from their parents so they can practice disco covers. Unless it's in some kind of ironic hipster way.

There’s nothing ironic about the music being played in one particular suburban garage near Oakland, Calif. The Young Ethio Jazz Band are teenagers who rock out with their parents’ music.

The band played its first gig in San Francisco last winter. Now it's slated to open for another act at Yoshi’s, a famous jazz club in San Francisco, and then it plays in the Ethiopian Heritage Festival at Georgetown University in Washington, D.C.

All of the kids are second generation Ethiopians between 11 and 16 years old. Before they started playing together a year and a half ago, most of them had the stereotypical reaction to their parents’ music.

“In the very beginning, I was really confused about the music,” said Yohanas Abanew, who plays keyboard in the band. “I just said ‘well this doesn’t really sound like music that I would really want to play.’”

Then he started practicing an Ethio-jazz song in his high school band.

“It really woke me up,” he said. “This is my culture, and I really need to learn this music.”

Yonathan Wolday had a similar revelation. He’s a tall, lanky 16-year-old who plays trumpet. Wolday is wearing a gray sweatshirt with a picture of a diamond and the letters “DMND.” A pair of white ear phones hang out from his collar and onto his chest.

His parents are from Ethiopia, and the songs they listen to are in Amharic, the official language in Ethiopia. Wolday doesn’t understand it well, and that initially turned him off from the music. He didn’t really start listening to the songs until he began playing in the band.

Even now, it’s hard to believe he’s channeling the music of his parents’ generation. Whenever the band stops practicing, you can hear simple rap bass lines pulsating out from his dangling ear buds.

Vibraphonist Mulatu Astatke gave birth to Ethio-jazz in the early 70s. He was the first African student to attend the Berklee College of Music in Boston. There he fused Western jazz with Latin rhythms and traditional Ethiopian scales.

If you watched the movie “Broken Flowers” you may have one of his songs stuck in your head. The score features several Astatke compositions, including Yekeramo Sew.

Mulatu Astatke and Ethio-jazz have had a bit of a resurgence in the U.S. since “Broken Flowers” came out in 2005. Still, it’s hard to find sheet music and transcribed parts for many Ethio-jazz songs.

So, instead of relying on charts, the Young Ethio Jazz Band is learning the music the old fashion way — by ear. Their accuracy is astonishing. At moments they sound almost identical to Astatke’s recordings.

Sirak Tegbaru brought the band together. He invited the kids to practice in his garage after after hearing them play at a nearby church. Even he is impressed with how well the kids have internalized the music.

“These kids really just want to play it the way it’s been played,” Tegbaru said.

Sometimes he has to encourage them to branch out — play some different scales, improvise their own solos over the chord changes. Make the kids break the rules.

Tegbaru left Ethiopia in 1979 when he was 16. He loved playing music, but his parents said it wasn’t practical. They pressured him to study medicine, and sent him abroad to Prague. Tegbaru still plays music, but he doesn’t have anything to do with medicine.

He sells State Farm insurance during the week. On the weekend, he leads the band.

“I feel like I am reborn again through these kids,” he said. "The kids — they glow when they play this song. They smile on their face. They’re happy and moving around. That means they really have that feeling. They’re playing from the bottom of the heart. And that’s, that’s music.”

The band has until July 26 to practice for the Ethiopian Heritage Festival at Georgetown University. It’s their biggest gig yet.

The kids at first said they weren't nervous. Then Tegbaru reminds them that as many as 10,000 people could attend the festival.

Semon Yacob who plays keyboard says in very matter-of-fact voice, “you can’t imagine how excited I am.”